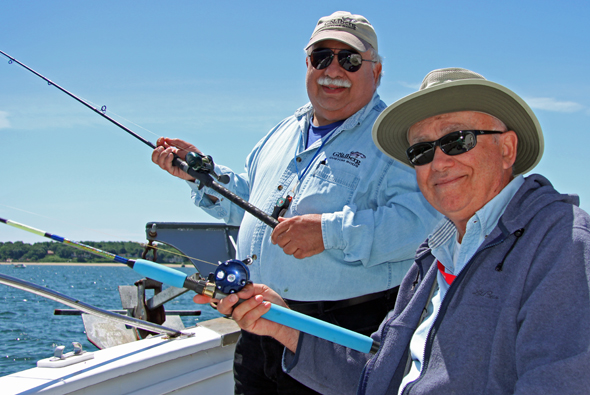 You’ve got to love these guys. That’s Al Goldberg on the left, and Captain Neil Faulkner on the right. These rod-builders extraordinaire donated their time over the winter to help members of the Ward Melville High School Fishing Club build their own custom outfits. Both enjoyed watching the students put their new outfits to the test on Sunday’s club trip aboard the Port Jefferson open boat Celtic Quest.

That West End summer flattie action I mentioned in today’s Newsday Column (6/27/14) is no fluke. The bite has been solid with quite a few fish in the 4- to 6-pound class, plus a surprising number of doormats pushing to 8 pounds according to Mark Keller at Bay Park Fishing Station. Best of the action has been in 55-foot depths at the McAllister Grounds, although it spans anywhere from 45 to 65 feet. Coming off the new moon tides over the weekend, it is likely the action here will drop off somewhat. Should that occur, move a little closer to the beach and try your luck in 35-foot depths. Don’t count this area out just yet – there is plenty of bait here and should the bite falter now it is likely to rebound by Tuesday or Wednesday. Another spot worth checking out early next week is just east of the freighter line waiting to move into New York Harbor. Play it the same way.

With local bay waters now warming rapidly, unusual by-catches are starting to crop up here and there. Bill Witchy of Comb’s Bait and Tackle in Amityville, for example, knew that one angler this week scored a puppy drum in Copiague Hole while Al Fiore had a 10-pound cobia grab his squid and spearing combo in Massapequa Cove. Witchy suggested fluke fans working up inside South Oyster Bay spend their time east of the Wantagh bridges in the State Channel or over by Squaw Island. Green or white bucktails tipped with squid or spearing, he said, have been the hot ticket. Comb’s Duke of Fluke contest is slated for Sunday (6/29/14). Over 300 anglers have already signed up. The boundaries are Debs Inlet to Moriches Inlet.

Anglers working Fire Island Inlet and Great South Bay have seen plenty of action on the fluke front but it takes some effort to scare up a keeper. Bigger fish, but fewer numbers, has been the rule out front in the ocean with 40-foot depths a good starting place. Action with RSA black sea bass, porgies and various bottom species has been very good on the near-shore wrecks. As for that weakfishing inside the bay off Point O’ Woods and Ocean Beach, you’ll want to get on it quickly before warmer weather pushes those fish back out the inlet. If you don’t have your own vessel, some of the Captree fleet boats are sailing evening trips for weaks, blues and bass.

Matt Broderick at J&J Sports in Patchogue said that fluke action remains decent in Moriches Bay with bucktails taking keepers at The Narrows and in the East Cut. Night tides have given up striped bass to 35 pounds for those drifting live spot and eels at the inlet. Bucktails, meanwhile, have worked well for surfcasters on the jetties. In the ocean just outside the inlet, large bunker pods have arrived on the scene. Right under them are plenty of big bass with several fish topping 50 pounds caught in recent days. Jimmy Bozza drilled a 56.5-pound brute on Thursday morning. Sharks are very close to the beach, too, with threshers and even a small mako caught in 60-foot depths.

Out at Shinnecock, Capt. Al Goldberg relayed word that fluke action has been mixed inside Shinnecock Bay with the bite strongest west of Ponquogue Bridge. Mike DeVito was using a Spro bucktail with a chartreuse Gulp! trailer in six feet of water when he drilled a 7-pound pool winner aboard the Shinnecock Star this morning.

Over on the North Shore, Mark McGowan at Cow Harbor Bait and Tackle in Northport said the striper bite has switched over to incoming tide with good action on bunker chunks along the ledge running between the obstruction buoy and buoy 13. The sharper skippers are trolling wire line with umbrella rigs to find the bass, then setting up to chunk. Porgies, he noted, have retreated from the mussel beds but are now established in 30-foot depths around most points. Looking ahead, Mark said fans of black sea bass may be in for a real treat. The season opens on July 15 but already a lot of big fish are being caught and released by anglers focused on scup.