DOORMATS PROWL BEFORE THE STORM 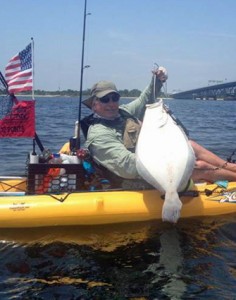 Rick Sanders drilled this big doormat, just shy of 14 pounds, from his kayak in the vicinity of the Marine Parkway Bridge on July 3. Just two days earlier, Sanders caught a 10-pounder – his first double-digit fluke! Photo courtesy of Elias Viasberg.

With the wind and rain of Hurricane Arthur’s near miss now behind us, the next few days have a lot of potential on the fishing front. Catches picked up as the barometer dropped and the big low approached. Now, with the water freshly churned and full of oxygen, that uptick should continue for at least a few days.

There are, of course, a few caveats. For starters, expect near-shore, bay and ocean waters to be murky or stained through at least Saturday morning. The progression of two or three tidal changes should help rectify that situation. In the meantime, opt for bright white, chartreuse, hot pink or black grubs, teasers and bucktails so fluke, weaks, blues and stripers have a better chance of seeing your lures.

If playing the bait and wait game, a big chunk of bunker allowed to sit right on the bottom will leach out plenty of scent to draw linesiders over for a look. Berkley Gulp! baits are a good idea for the fluke and weaks when the water is discolored as they leach even more scent than real live baits. Those targeting porgies and such should be sure to keep chum pots refreshed so plenty of scent is out and about.

BIG FLUKE ON THE PROWL

Just before the storms passed through on Friday, snappers arrived on the Long Island scene. Anglers were finding plenty of 4-inch baby blues at the Captree and Jones Beach piers, as well as up inside South Shore tidal creeks, Shinnecock Canal and within most North Shore harbors. Right now, the diminutive blues measure only about four inches long. That’s too small for a fish fry in my book – but it is just right for keeper fluke bait.

Bluefish regulations allow anglers to keep up to 15 fish per day – but only ten can measure less than 12 inches. That means you can keep about a tide’s worth of the little critters in your livewell. While live snappers are always prime baits for big fluke, they work nearly as well if deceased so be sure to freeze any leftovers. 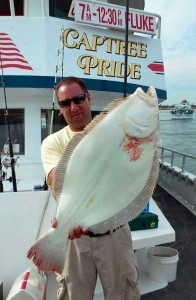 James Andresen pulled this 10-pound-plus doormat aboard the open boat Captree Pride on June 28. It’s just one of several true doormats to come from the Fire Island Inlet area over the past two weeks. Photo courtesy of Capt. Ken Higgings.

As I noted in Friday’s Newsday outdoors column, there have been some truly big fluke taken of late but the action has been limited to a few specific areas. The waters around the Marine Parkway Bridge have been one hot spot, especially on incoming tide. Elias Viasberg, kayak fisherman extraordinaire, has been scoring regularly in the area but his buddy, Rick Flanders is the one who really put on a show this week. Using a one-ounce Spro bucktail and five-inch Berkley Gulp! swimming mullet, he drilled a 10-pound doormat on Tuesday and followed that up Thursday with a whopper just shy of 13 pounds! There are more big fish around, advised Viasberg, but the best of the bite lasts only an hour so make the most of your opportunities.

Another big fluke hot spot of late has been Fire Island Inlet. The open boat Captree Pride drilled a 10-pounder west of Robert Moses Bridge between buoy 15 and the sand bar last Saturday. A 9-pounder was also taken by a private boater late in the week from just west of Robert Moses Bridge, and 11-pound-plus brute was pulled from east of the bridge. Don’t discount these three big fish as a coincidence. Last year, as the snappers arrived, quite a few 8- to 12-pound doormats came from this same stretch. Most were caught on live bait in deep pockets or along channel edges.

Fluke action in general has been good for the Captree fleet, and those party boats targeting near-shore wrecks have also had some very strong bottom action. Quantity has had the edge over quality in this game, although most anglers go home with a few big porgies plus some RSA sea bass.

Fluking has also been surprisingly strong out of Greenport. That may be due to a rapid temperature rise on Peconic Bay. As the waters here continue to warm, fluke that are deep in the bay push their way around Shelter Island and head on out to cooler Gardiners Bay. That migration seems to be in full swing right now with the best scores coming on squid and spearing combos in the vicinity of Bug Light. Ryan Schlichter fished that area with John Foster, Mike Mazzaferro and George Van Etten aboard the Pipe Wrench for seven keepers to 23.5-inches.

Montauk has also been a hot spot with action just before the storm really picking up. No monsters, but plenty of quality summer flatties on both tides.

One of the more interesting reports I came across this week was filed by Capt. Stu Paterson of Northport Charters. Like many on the North Shore, he’s been bottomfishing for porgies and then chunking for stripers while waiting for the fluke bite to reassert itself. “It’s amazing what comes up when you get a chum pot over the side,” he told me on Thursday. “Today we had porgies, fluke, sea bass, a blowfish and two winter flounder that had to be returned.”

As for the stripers, there is a decent set of fish in both the Eaton’s Neck Triangle area and off some of the more prominent points in western Long Island Sound. Both areas are seeing the best action on bunker chunks near the top end of incoming water.

The big news on the bass front, however, remains the cows smashing live bunker along the South Shore. The bunker pods can be found around Jones Inlet with ease, and between Fire Island Inlet and Moriches Inlet if you motor around a bit. East of that, you’ll really need to cover some ground to find isolated schools of the big baitfish but the rewards are generally worth the effort.

The South Shore bite has been vicious, but that raises concerns that too many big stripers are being harvested. Remember, you don’t have to bring home a legal fish on every trip to be a successful angler. If you’ve have enough striper fillets in the freezer to last a while there’s no shame in playing catch and release.