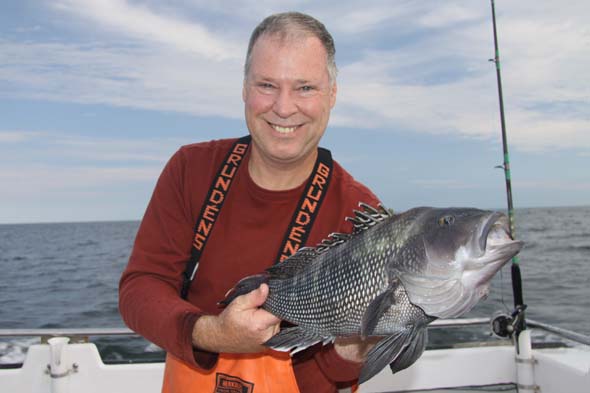 Big sea bass, like this one the author caught aboard the open boat Shinnecock Star a few seasons back, fight hard and taste great.

Black sea bass were the primary topic of my Newsday outdoors column this week, but there was more news than I could fit into such a short piece. The Captree fleet, for example, had some very good action on the Fire Island artificial reef.

“The morning tides have produced the most consistent action with sea bass,” said Captain Joe Vanderveldt of the Jib VI. “We’ve been fishing in 60-foot depths and everyone is going home with a mixed-bag of species that include some very respectable sea bass.”

Private boaters working rubble piles east of Moriches Inlet, and boats working the artificial reef and rough bottom east of Shinnecock also scored well with sea bass to about 4 pounds. Just as with the Captree fleet, the magic depth seems to be somewhere between 50 and 60 feet.

Vanderveldt also noted that fluke action has been better inside Great South Bay than it has in the ocean when weeds aren’t a problem. He noted a significant number of 6- t o 7-pound fish caught this week with catches pretty-much split between those using Gulp! baits and those favoring spearing and squid combos. While the majority of the action has come from the Fire Island Lighthouse area back inside the bay, the very top of flood tide has given up a surprising number of bigger fish around the Robert Moses Bridge and inside the inlet itself.

Fluke also continue to feed with abandon throughout Moriches Bay. If you want keepers, however, work the flats east of the inlet. Most of the better scores over the past few days have come on bucktails fished in only four to six feet of water. Another tip: Hot pink bucktails have been getting the job done with fish measuring 20 inches or more.

One area where fluke of any size have been difficult to come by so far this summer has been the Long Island Sound side of the North Fork. Usually, late June and early July see some super action on small bucktails cast from the shore between Riverhead and Truman’s Beach. It’s possible that the action has been delayed by cool water temperatures, or it might be because there has been little in the way of baitfish schools along the beach. The later situation is starting to change right now as small snappers are cruising just outside the breakers and a few pods of spearing have also made the scene. Hopefully, the arrival of the tiny blues and their favorite fodder will lure the summer flatties closer to shore.

In the meantime, one way to get your line out far enough off the beach to tempt any fluke that may be holding a little deeper is to rig with a diamond jig or Hopkins Shorty. Tip either of these lures with a four- to six-inch length of squid, cast out as far as possible, and drag it back slowly while keeping in contact with the bottom. I’ve picked up a couple of fish using this method in the past few weeks. The technique also works very well in inlet waters, from the jetties and breakwaters in Western Long Island Sound, or even out on the open beach for anglers working the South Shore.

Striper action had been hot and heavy at Montauk for the past two weeks before taking a breather for a day or two at mid-week. Now, skippers are reporting that the cows are back on the chew and the action is again on fire. Between that, the solid fluke fishing in the area, plus a shot at outlandishly large sea bass and porgies, Montauk would seem to be worth the trip at the moment.

Paulie Apostolides from Paulie’s Bait and Tackle in Montauk confirmed the striper bite is still “smokin’!’ having weighed bass in the 30-to 40-pound class every day this week. The fleet has been using live eels or dragging wire at The Elbow, Great Eastern and in the North Rips. “Some days,” said Apostolides, “you have to look around a bit to find the fish – but not for too long.”

While Montauk boaters have enjoyed tangling with plenty of big bass, fresh schools of mix-sized linesiders have moved into the surf.  “Surfcasters throwing bucktails, eels and darters have had plenty of action after dark right under the lighthouse,” revealed Apostolides, and they are taking some along the open beach, too.”

TRIGGERS ON THE BEACH? 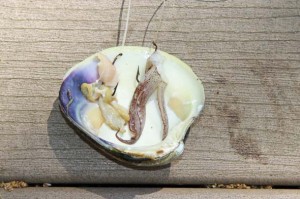 Don’t overload your hooks when targeting scup, sea bass or triggerfish. A small strip of squid or clam measuring about two inches long is all it takes to catch a pool winner.

Easy to overlook with the stripers feeding hot and heavy has been a solid run of surf-caught scup to three pounds in the suds right behind Montauk Village. Mixed in with the chunky pork chops have been some legal stripers inhaling the worm and clam baits.

It was just about this time last year that a serious triggerfish run began in the surf at Montauk. That action continued straight through the summer and into early fall. The tough-fighting, great-tasting triggers haven’t put in an appearance here as yet this  year, but they are starting to show up on the rocks at Shinnecock Inlet and inside Shinnecock Canal where they mix with porgies and short fluke. With ocean water temperatures still just a little bit on the cool side, it might be another two weeks or so before the Montauk trigger run gets underway. I’ll be sure to keep you posted.