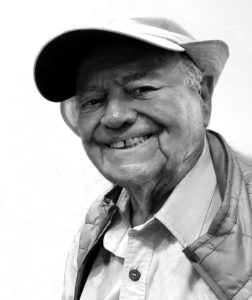 It seems that many serious outdoors writers have stories to tell about Lefty Kreh, who passed away in March at age 93. A man who really needs no introduction, most of those I’ve spoken with haven’t mentioned a big fish they caught with the fly-casting legend. Instead, to a person, they mentioned how willing he was to share his knowledge, to teach his passion or to offer encouragement at both the fly-casting and writing professions – both of which he totally mastered.

My own introduction to Lefty came over the telephone one afternoon. I was just beginning to hit stride as a writer and had begun my freshwater report for The Fisherman Magazine, plus small newspaper columns for Suffolk Life and the Fire Island Tide, both on Long Island. I’m no longer sure of the yearn or exactly how the conversation went, but it was close to the following:
“Hello, this is Lefty Kreh. Do you know who I am?”
After convincing myself the call wasn’t a prank, I stammered something about him being one of my favorite fishing personalities and made that worse by adding that I had read his stuff since the age of 10, a point followed by a bit of awkward silence.
“Listen, he finally said, without even using my name, “I’ve been writing a column for a new magazine called New York Outdoors, but I’m just too busy to keep it up right now. Would you be interested in taking it over? The magazine covers all sorts of outdoors activities, I’m sure you could make it work.”
When I mentioned that I had never written on a state-wide level, and asked who might have recommended me for the job, he simply dismissed both thoughts saying “none of that matters.” Then he gave me some great advice: just be yourself, write about what you love and tell the truth. You’ll be fine.”
With that he said good bye – I’m pretty sure without waiting for me to actually agree to take the column. I no longer recall if he gave me editor Gary Joyce’s contact info, or if Gary simply called afterward, but within a short while I was indeed writing for what turned out to be one of the finest, best edited magazines with which I have ever been associated. It was that column, in fact, that gave me the confidence to begin reaching out to bigger and bigger venues – and it was the first column in which I began to proof, double-proof and triple-proof my words knowing that Lefty might be reading.
I was lucky to thank Lefty in person at an outdoors show a year or so later, but never really got to sit down with him after that for more than a mere “Hello.” Too bad, he’s one person I would have liked to have gotten to know better.
Rest in peace, Lefty, and thanks for sharing a few kind words with a budding outdoors journalist. In the long run, they really made quite a difference.
By Tom Schlichter
Use the LIKE button below to get notifications about new articles in your Facebook news feed!
Related Posts
Outdoor Tom Extras
Follow Me