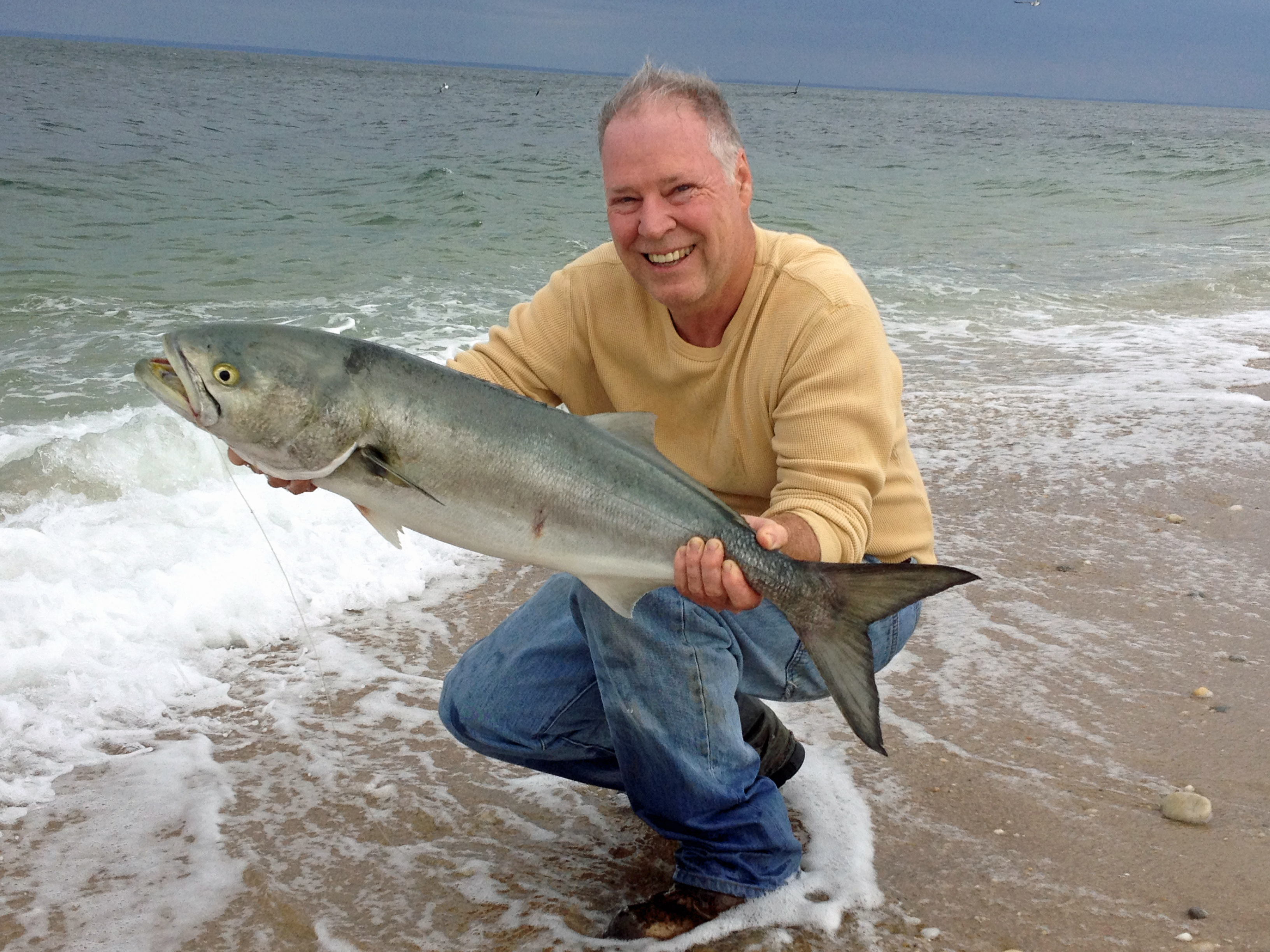 Big bluefish roam both the ocean beaches and inside bays. The author caught and released this ‘teen-sized chopper on a Panther Martin Big Fin Paddle Tail. OutdoorTom.com photo.

With more than 1,500 miles of coastline, New York’s marine district offers tremendous opportunities for shore-based anglers to score from spring through fall with many kinds of fish including striped bass, fluke, false albacore, porgies, triggerfish and blackfish. Although much of the marine coast line is privately owned and off-limits to the general public, there are generous stretches of federal, state, county and town parklands that allow access to some of the best fishing action on the eastern seaboard. In addition to the parks, a quick glance at a local map will reveal many low-key, neighborhood access points as well. Please note, however, that a four-wheel drive beach permit is required to go either off-road or on the beach in most areas, some villages and towns have residential restrictions and some locations require a nighttime fishing permit for access after dark. 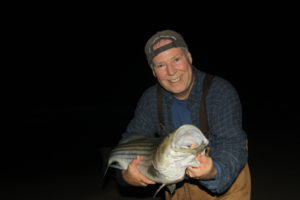 Gateway National Recreation Area allows anglers to tangle with western Long Island south shore stripers, blues and fluke throughout the season  plus false albacore in the fall – all within the shadows of Manhattan’s skyscrapers. Breezy Point Jetty is particularly productive with bluefish, stripers, fluke, porgy and false albacore regular visitors. Good fishing is available along the entire shore early and late in the day. A special permit is required to park at Breezy Point Jetty between March 15th and Labor Day.

Continuing east along the South Shore, surf fishing is a year-round option at Jones Beach State Park and a mix of bluefish, striped bass and fluke may be caught on bucktails, diamond jigs, surface poppers or cut bait. Bottom-fishing with squid strips at the Jones Beach Pier at Parking Field #10 offers a nice shot at mixed bag catches including fluke, porgies, sea robins, black sea bass and cocktail blues.

Robert Moses State Park offers anglers a chance to work Fire Island Inlet where school bass, cocktail blues and fluke abound, or to probe the rough and tumble ocean surf in search of cow bass, monster blues and doormat fluke. Cut bunker and whole clams account for most of the bass and blues on the ocean side during the summer months, with poppers and tins taking top honors during the fall. Striped bass are also receptive to plugs and soft-plastic swimbaits worked after dark inside the inlet. Bluefish willingly smack bucktails, tins and poppers on dropping tides, and fluke gobble down bucktails or long strips of squid fished on the bottom. Many anglers fish from the beach inside the park, but solid scores of fluke are also available at the marina fishing pier located just east of the station house.

The Fisherman’s Pier at Captree State Park is a ‘must do’ for a day of relaxing bay fishing for fluke and a chance to also catch schoolie blues, small stripers, snappers and blue claw crabs. Many anglers visit Captree for the excellent party boat fishing at the marina, but fishing the piers provides plenty of access to prime waters east of the Robert Moses Bridge. 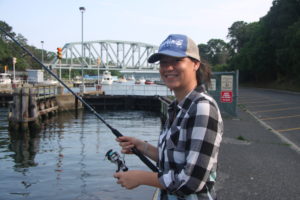 Shinnecock Canal is a great early-season hot spot. Fish here when the locks are closed. Photo by Tom Schlichter.

Shinnecock Canal is a strong contender for the title of ‘hottest shore-bound fishing action’ each spring and summer. This narrow channel connects Shinnecock Bay with Peconic Bay and serves as a bottleneck that fish pass through to move between the North and South forks. Early spring offers good catches of schoolie bass and blues, along with a smattering of bigger fish, and an occasional bonus weakfish. Fluke come into the area when the waters warm up in May and June, and keepers can be caught on squid and spearing combos or white, pink or chartreuse bucktails tipped with squid, spearing or sand eels. Look into the water along the concrete edges and you may find a few tasty blue claw crabs to add to the cooler. The secret to fishing this spot is to arrive immediately after the canal locks have closed or just before they open. The locks are closed approximately three hours and thirty minutes before high tide at Sandy Hook and open two hours and thirty minutes after high tide at Sandy Hook. Check the local tide tables for more information or simply call the Shinnecock Lock House at 631-852-8299 to find out what time the locks open or close. 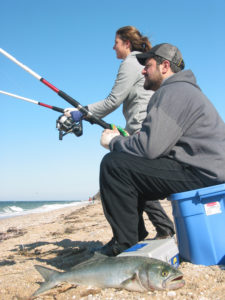 What’s biting? Along the fishy Long Island Coast it can be anything from fluke and blues to porgies, bass or striped albacore. Photo by Tom Schlichter.

Several parks provide access points to the general public on the North Shore. Sunken Meadow State Park is accessed from the Sunken Meadow Parkway. This location offers fast action to anglers casting bucktails, tins, soft-plastic swim shads and poppers for school blues and stripers. There is plenty of fun for bottom-bouncers offering squid strips for fluke and clam baits for porgies. Occasionally, a large bluefish or keeper bass may be caught close to the mouth of the Nissequogue River on cut bunker or whole clams.

A trip east towards the wine country on the North Fork takes one to Wildwood State Park, where bottom anglers spend the summer months catching a mix of fluke, sea robins and porgies during the daytime. A fair number of keeper stripers and cocktail blues provide extra sport early and later in the day. Stripers and blues respond well to swimming shads, tins and poppers during spring and fall at this location. Wildwood State Park is well attended by beach enthusiasts in the height of summer, but it offers superior action and a fair degree of solitude during early spring and late fall.

Further east, Orient Beach State Park offers surf fishing access points to Gardiners Bay, Plum Gut and Long Island Sound. The possibilities can seem endless in these waters for bass, blues, porgies and an occasional large fluke, and these sites can provide some memorable fishing. Work bucktails, poppers or tins between the north side boulders or from the south side jetties. Casting Deadly Dick tins, 1-ounce Panther Martin Big Fins, or small, white plastic grubs in late September or early October may help you land a feisty false albacore. 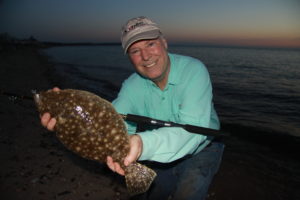 From Riverhead east to Orient Point, June is a great month for catching fluke from shore. OutdoorTom.com photo.

As far as tackle is concerned, a sturdy, 9- to 11-foot. spinning setup spooled with 17- to 30- lb. test line is adequate to work the South Shore ocean beaches. Big plugs, large poppers, 2- to 3-ounce tins and bottom-fishing rigs sporting chunk baits with 4- to 8-ounce sinkers are usual for these areas. Fishing inside the bays or along most of the North Shore requires a medium-weight, 7- to 9-foot spinning outfit with 14- to 20-lb. test line. You can of course, go lighter or heavier than these suggestions based on personal preferences. Consider these outfits, like the access points mentioned, to simply be logical starting points. Poke around and you’ll find many more options for public access.