BACK TO SCHOOL WEAKS 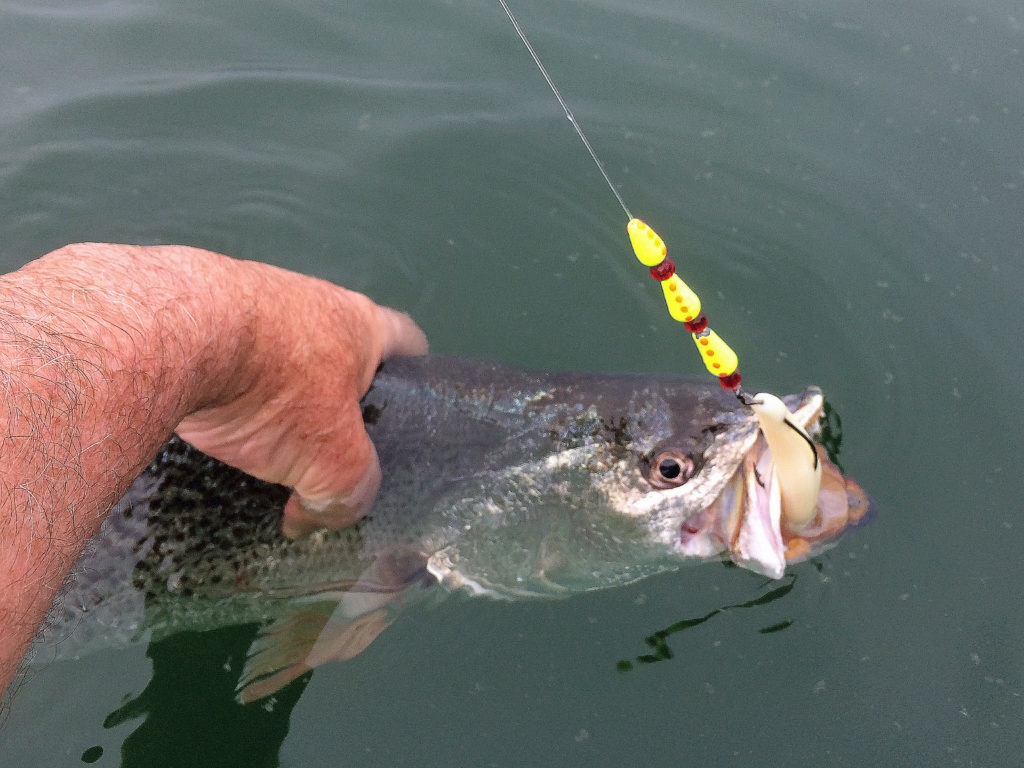 Late summer weakfish average 16 – 20 inches in length and are ideal for family fun. This one ate a Panther Martin Fluke Train lure. Photo by Tom Schlichter.

Felicia Scocozza lowered her bucktail into the dropping tide at the mouth of a fast-flowing tidal creek and watched as its soft-plastic tail stretched out in the current. With a slight lift of the rod tip, she edged the lure in tight along a bridge abutment, then began to work it with a gentle jigging motion.

“Got one!” she shouted, as her lightweight rod doubled over within a minute. We had been planning to play with a set of school stripers that had been feeding on spearing being swept out of the creek and assumed we had hooked our target. As the fish came back into the light, however, it proved to be a school weakfish weighing just shy of four pounds. For the next hour or so, we hammered weaks in the 16- to 20-inch class, releasing each to fight another day.

With a perfect blend of aggressiveness and small-scale fighting ability, the purple-freckled school weaks of late August and September make for great light-tackle sport and family fun. Since they average 2 to 3 pounds and favor relatively sheltered waters, you can target them with 10- to 12-pound test spinning gear if you want to use squid strips, sandworms or clam slices for bait on a simple hi-low rig. They are even more fun and challenging if you drop down to 8- or even 6-pound test and toss one-half- to 1-ounce lightweight jigs. Freshwater bassin’ gear is perfect for this application and there’s nothing wrong with breaking out 4-pound class trout outfits and even lighter marabou jigs to further test your skills when the water is calm and currents run soft.

For many anglers, weakfish are a spring and early summer affair. It’s during the spring when tiderunners that can push double-digit weights appear at the inlets and bay waters looking to feed and spawn. By mid-summer, most of the bigger fish have left for cooler water but schoolies often remain along primary channel edges or in deep pockets bordering shallow flats. 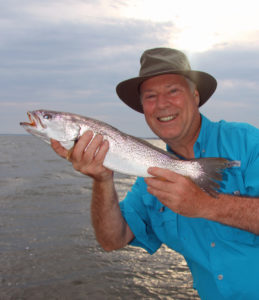 School weaks hit both day and night. For daylight action probe deep holes and channel edges found within a half-mile of a river or substantial tidal creek. OutdoorTom.com photo.

By late summer, the schoolies have put on some added weight and stretched the tape enough to make them effective predators and respectable fighters for their size. It’s at this point, as cooler night temperatures begin to stir the bait in rivers and tidal creeks, the young weaks grow more aggressive. With the first few cool nights of late August, they’ll begin pushing towards the mouths of substantial tidal creeks. During daylight hours, they may hold anywhere from a few hundred yards to half-a-mile out from the creeks, feeding aggressively on baitfish and grass shrimp being flushed out on dropping tides. After dark, they’ll push closer, often taking up feeding stations just outside the creek or even slightly inside.

In either case, one key to targeting these stealthy predators is to work any deep holes or noticable channel edges you can find. Early in the morning you can cast small soft-plastics up on the flats with some success, especially on calm mornings and under cloudy skies, but the bulk of the schoolies will usually set up in 10- to 30-foot depths, especially if a hole or channel edge drains a nearby flat or is in the vicinity of a tidal creek, river mouth or similar drainage that leaks small baitfish and grass shrimp into the main bay on dropping tides. Since weakfish tend to be somewhat boat shy, search for deep water that is off the beaten track. 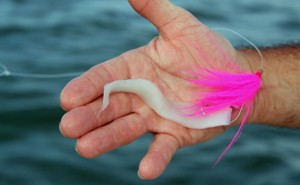 Long, thin strips of squid work well for August and September weakfish, especially if framed by a bit of pink. Photo by Tom Schlichter.

Late summer school weaks are receptive to both bait and lures and there are proponents in each camp. Some anglers like to drift for them with nothing more than long strips of squid impaled on a high-low rig sporting 2/0 wide-gap style hooks dressed with bright pink teasers. Others favors a ½- to 1-ounce Spro bucktail and Berkley Gulp! Swimming Mullet combo. My preference is for a white, pink or chartresue Spro tipped with a narrow strip of squid. The squid seems to hold up better against the snapper blues that are often patrolling the same waters, and the bucktail is easy to remove – a big plus in this mostly catch-and-release game.

Another option that seems to work well, especially if fishing in deeper pockets, is to tip a small AVA 007 diamond jig with a sandworm or strip of squid. Lower this to the bottom and jig it slowly while drifting. The tantalizing action is too much for most weakfish to resist. White or red, 6-inch jelly worms also still work, of course, as do white Bass Assassins. Fin-S-Fish are yet another offering that can get the job done with darker colors like chili, black-back with silver belly, or dark green back with white belly taking top honors.

Although most anglers choose to drift for school weaks, hoping to align both wind and tide for proper presentation, anchoring often provides the steadiest action. Usually, I’ll make a drift or two in an area I suspect holds weakfish. If I manage to hook-up, I’ll make a second pass over the same spot. Fish on successive drifts is the signal to get the anchor over the side. Ideally, you should run slightly up-tide of where your lure or bait was intercepted, turn the bow of your boat into the wind or current, and quietly ease the anchor over the gunwale.

Once settled into position, it’s time to get the weaks really excited. This is best done by dropping a frozen log of ground clam into a chum pot and bouncing it off the bottom. It is amazing what a difference a little chum can make. Give the pot a shake every few minutes and you can have every school weak in a 100-yard radius lining up to smack your offerings. You might also draw in a few fluke, blowfish or even kingfish to the pot, adding spice to the game. Unfortunately, the use of chum in these backwaters can also attract sea robins and ugly, tough-mouthed toadfish – which kids love to catch but parents hate to remove from the end of a line. Bring along a pair of pliers, just in case.

Lastly, be sure to keep a net at the ready. While school weaks will make up the vast majority of your catch using these techniques, you never know when a tiderunner, doormat fluke or cow striper might show up. The first two are often drawn to the waters surrounding tidal creeks in search of snappers. The big stripers, I suspect, may be actually be targeting some of the smaller weaks. Hook one of those big ones on your freshwater spinning outfit and you’ll certainly have an extra story to tell.