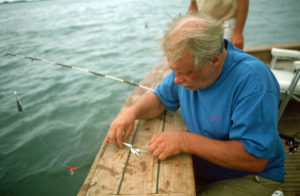 A recent discussion about the difficulties of catching keeper fluke brought to mind a long-ago day on Long Island’s Debs Inlet spent with the late Charlie Nappi. Known to many as The Duke of Fluke, Nappi still holds the International Game Fish Association all-tackle world record for a mammoth, 22.44-pound doormat he hauled from Montauk’s Frisbee Grounds some 43 years ago come September.

Nappi wasn’t a one-fish wonder. He caught hundreds of doormats, as fluke weighing more than 8 pounds are known. He had health issues when I caught up with him in the early 1990s. Still, he was enthusiastic when it came to talking fluke, and he freely dished advice on how to catch the big ones. I was fortunate in that he took a liking to me and offered to take me out for the tasty summer flatties – an opportunity I wasn’t about to pass up.

Most of what he learned, Nappi said, was built on a strong foundation laid by the acknowledged Montauk fluke-slayer of the era, Captain Ed “Spider” Hegner, along with advice from Captain Carl Forsberg of Viking Fishing Fleet fame. Some of the tips he offered that day I still employ, and they have improved my chances of catching summer flatties big enough to brag about. With August having a reputation for producing some of the best doormat action of the year – especially off Long Island’s Montauk Point, Massachusetts’ Nantucket Shoals, Ambrose Channel in the New York Bight, and New Jersey’s Shrewsbury Rocks area, sharing these reflections seems a timely choice. 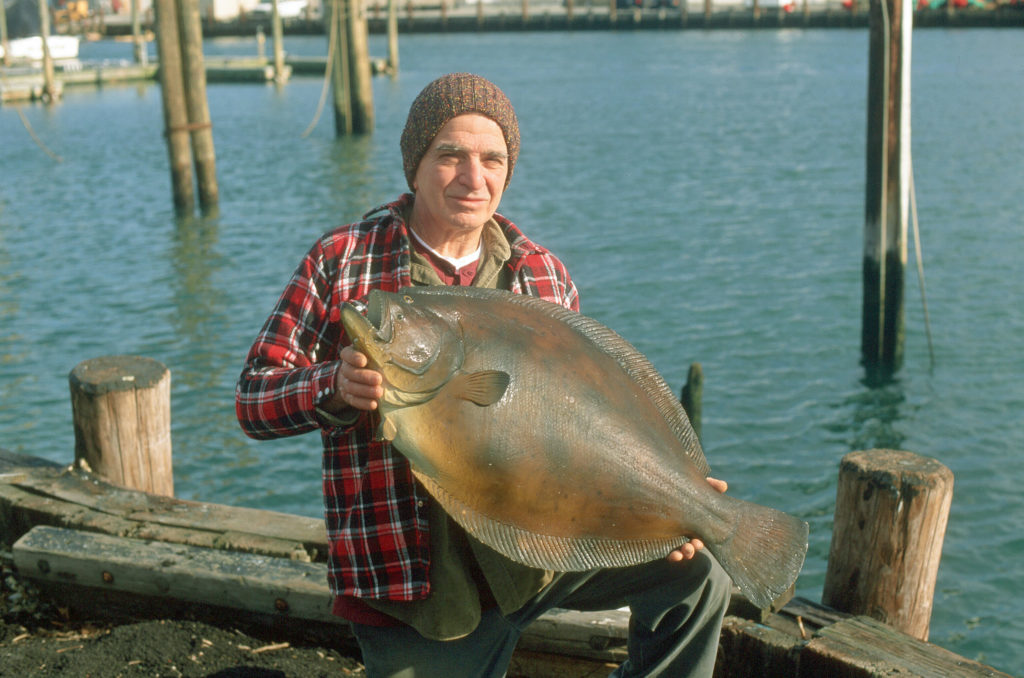 Bob Sansonetti from Freeport Bait and Tackle, a friend of Charlie Nappi’s, holds the mount of the Fluke Duke’s 22.44-pound world record doormat. Nappi caught the monster summer flattie at Montauk in 1975. Photo by Tom Schlichter.

Though the size limit for fluke back then was a generous 14 inches, Nappi had little interest in small summer flatties. He targeted big fluke at a time when most anglers were happy to take home a few skinny bay fish for supper. One point he made particularly clear was that big fish like deep water and, thus, fishing out in the ocean made more sense than working the bays. “Not that there aren’t big ones in the shallows,” he noted, “There’s just a lot more of them in the ocean.”

As we fished that morning, Nappi explained that most people fished too quickly for fluke. He liked to work the slowest stages of the tides and said that nearly every doormat in excess of 10 pounds he had ever caught was hooked on the first or last hour of moving water. The faster stages of the tide, he said, favored smaller, more aggressive fish. The biggest fluke conserved their energy rather than compete with the little fish while working against the strong currents at mid-tide.

“If you want doormats,” he said, “fish when the current runs slowest – and drift several hundred feet down-tide from major rips, not at the head of the rip. The real secret, however, is to lower your baits slowly to the bottom so your rig doesn’t get tangled and start spinning around.”

Another Nappi tip: “Use a landing net with green mesh. Dark mesh can sometimes really spook the largest fish.”

“People laugh at the size of the baits I use,” Nappi chuckled as we made our final drift, “but big baits really do catch big fish. I once caught a 75-pound tuna on an offshore trip and stunned my buddies when I live-lined it behind the boat. They stopped laughing when a 400-pound mako grabbed that tuna by the tail.”