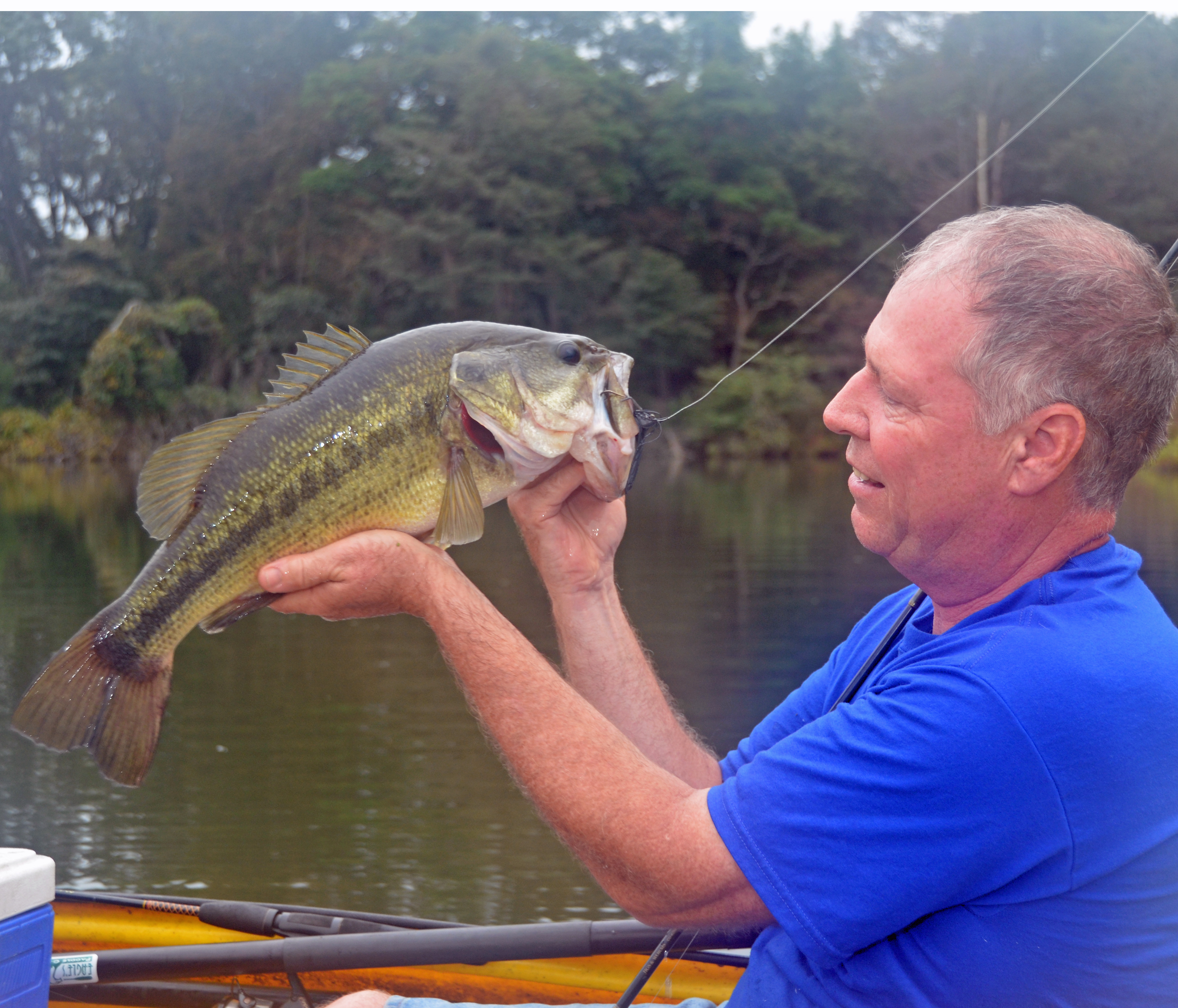 Moving off the bank on a cool September morning can help you find sulking fish. This one inhaled a jig & pig worked slowly across the bottom by the author. Photo by Tom Schlichter.

You would think that late summer and early fall would be prime time for largemouth bass fans here in the Northeast. After all, water temperatures are coming off their dog day highs, there is still plenty of green vegetation to work from the shore right on out to deep water and, with the focus on saltwater favorites like summer flounder, striped bass, scup and bluefish, freshwater fishing pressure is generally light.

Indeed, there seem to be a lot of promising factors in favor of serious bass anglers at this time of year, but many bigmouth fans actually report finding September bass difficult to come by. There was a time when I did, too.

These days, however, my late summer and early fall scores are quite respectable and occasionally outstanding. The primary change that has buoyed my hook-up rate was recognizing the period from late August through mid-September is actually a transition time for freshwater environs in our region. That means you’ve got to be even more aware than usual of day-to-day or even hour-to-hour shifts in factors such as water temperature, available vegetation and water clarity as they relate to the predators you seek.

While the tendency is to think in terms of warm-water fishing during September, especially when temperatures still climb above 80 degrees early in the month, nighttime temps are what really control water temperatures and, thus, the metabolism of largemouth bass. Sure, it can be 84 degrees out and sunny during a mid-September afternoon, but if it was 55 degrees the night before, a downward drift in the water temperature will likely dull the aggressiveness of bass and drive them out to deeper water.

For this reason, following cold nights, I tend to start my prospecting in four to eight feet of water, a fair distance off the bank but within in a long cast of a shallow flat, point or shoal. Often, fish that have been feeding in such areas will simply back off a bit, sliding out into slightly deeper water where they’ll hold until the sun comes out and warms things up. A cool night, followed by a cloudy day, likely means the fish will remain a bit on the deep side. A bright, sunny day, however, should bring them back into the shallows by mid-morning. 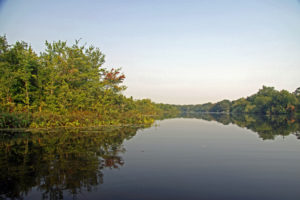 It looks clear now, but just weeks before the author snapped this photo surface weeds stretched all the way across this small pond. Photo by Tom Schlichter.

Under such changing conditions, I really like to concentrate my effort around significant points. A sandbar or small peninsular jutting out from the shore to deeper water allows me to work several depths with ease – possibly on the same cast. In the morning, I’ll often start by slow-rolling a spinnerbait or gently working a jig & pig combo at the deep end of a point. If that doesn’t produce the desired results, I’ll slide a little shallower with the same lures and slightly increase the speed of my retrieves. Still no luck? Chucking that jig right into the timber along the shore is the next trick, followed by slow probing with a plastic worm.

It main idea at this point is to find at which depth the fish are holding, and just how aggressive they might feel. Changing water depths, switching lures systematically and altering the rate of retrieve are simply ways to explore the possibilities thoroughly. Doing so along the length of a point expedites the process. Don’t spend too much time at any one water depth or with any particular lure or retrieve. In spring and early summer, sticking with the tried and true is often a positive approach. In late summer and early fall, sticking with a technique that fails to produce right out of the box can leave you covering a lot of water with little to show for your efforts.

During mid-summer, bass that are hot and bothered often bury themselves in the thickest, darkest vegetation they can find. With less need for shade from heat in September, however, they have a greater tendency to patrol long edges that border open water. Go ahead and hit your favorite weed configurations as you would throughout the warmest months, but if that doesn’t pan out, try working a twitch bait, shallow running crankbait or even a small surface popper along the deepwater edge of any remaining bright green vegetation.

As the waters begin to chill after Labor Day, a lot of weeds come loose from the bottom. Floating on the surface, they clump together and look quite inviting. While they may hold some fish, you’ll be better off concentrating effort around living weeds that are still firmly embedded in the bottom. Sets of lily pads are ideal for this approach and, with their lushness fading fast, now offer more open pockets than a few weeks ago. 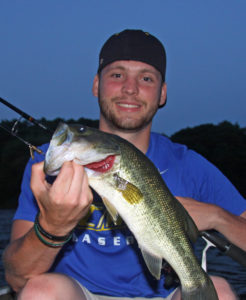 When late summer waters turn gin clear, small spinners can do a number on big bass. Photo by Tom Schlichter.

As noted for fishing other weed mats at this time of the year, bass holding amongst the lilies will tend to stray a bit through September. For this reason, be sure to work not only tight against the pads, but up to ten yards off in water that is clear and clean. Plastic worms and weedless frogs can do most of the dirty work where the leaves are thick, but a simple in-line spinner like the Blue Fox Super Vibrex, Panther Martin Classic or Mepps Fury can account for some very solid strikes when retrieved three to ten yards out from relatively straight edges that border channels or deeper water.

With the sun bright, weeds starting to retreat and zooplankton dying off, the clarity of most freshwater lakes and ponds seems to increase with every day. By mid-September, in fact, “gin clear” is a term that frequently makes its way into bassing conversations. While clear water is enjoyable to look at, it gives a decided edge to any bass that considers your lure.

Knowing this, it makes sense to take advantage of conditions that slightly discolor, cloud or stain the waters you plan to fish. Fishing after a heavy rain is a good example, especially if you can find a stain line where the water is muddled on one side and noticeably cleaner on the other. Work these lines like weed edges, casting just inside or just outside the clouded edge and systemically trying different lures and different retrieval speeds until you find a combination that succeeds.

CHANGE ON THE FLY

Although it’s important not to stick too long with a single approach unless you experience some success during this late summer transition period, be aware that changing conditions during the day may mean that you’ll occasionally need to re-try patterns that didn’t work previously.

On one September trip I took several years back, for example, the early morning bite was in eight-foot depths on pig & jigs. That fell apart around 9:00 a.m. as the sun warmed the surface and the bass began to favor crankbaits along the edge of a shallow flat. By 11:00 a.m., with a bright sun significantly warming the water and burning my hide, the bigmouths dug deep into thick shoreline vegetation where I managed to pull a few out by casting weedless frogs onto the bank and hopping them back into the drink. By noon, air temperatures were well over 80 degrees, bathers were swimming at a nearby beach and the bass were clearly done for the day.