CASTING FOR A NORTHEAST SLAM 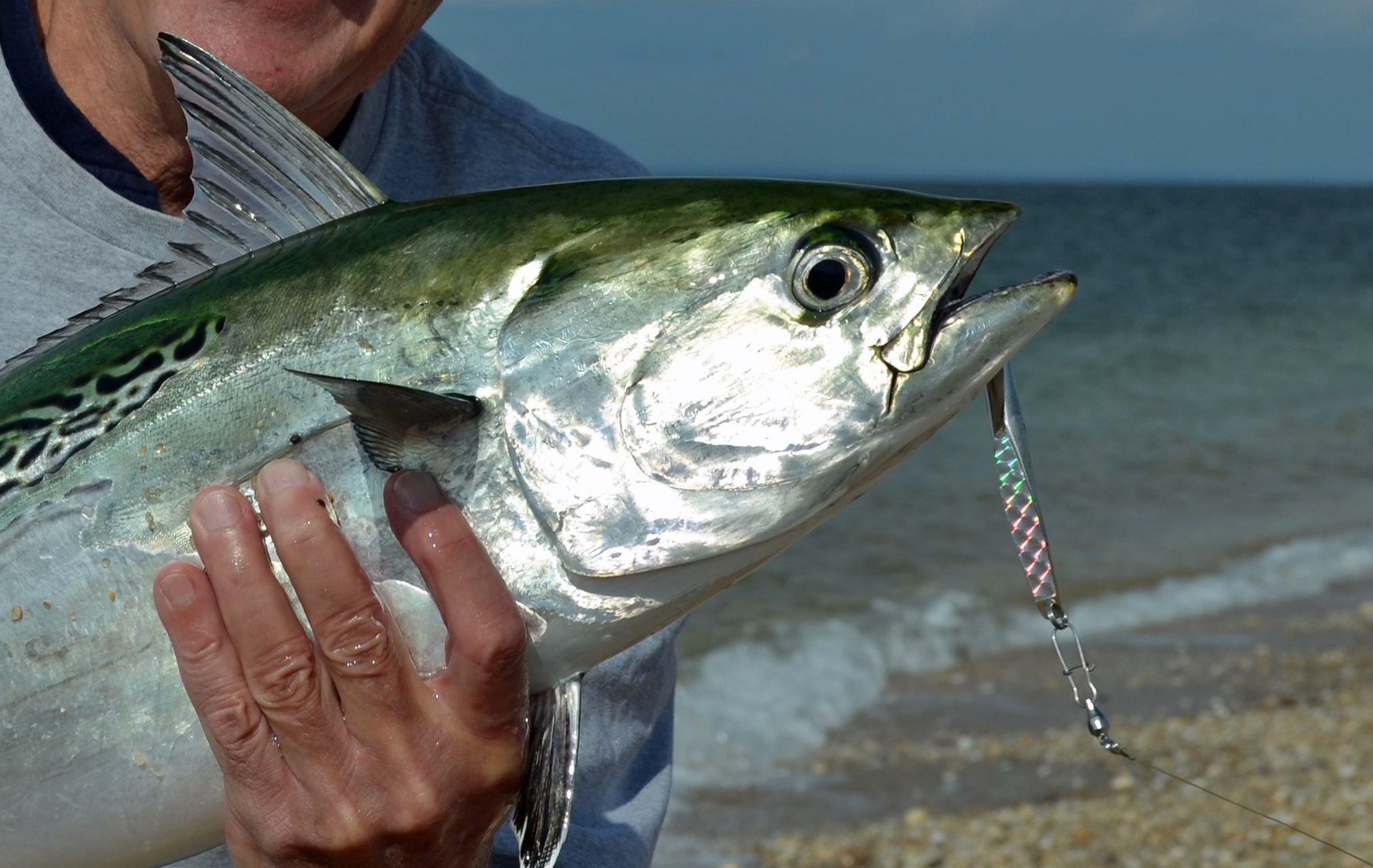 A Deadly Dick tin did in this Long Island Sound false albacore. The fish was quickly released to fight another day. Photo by Tom Schlichter.

The scene was one of pure fall fishing mayhem. In the rip that rounded the end of a prominent point, anglers from shore were heaving long casts toward breaking fish while several boat crews used light-tackle and fly rods to cast toward the beach. Terns and gulls were diving on the bait from above as stripers and blues pushed up from below, ripping into the frantic mixed schools of spearing, sand eels and peanut bunker. When several pods of false albacore exploded onto the scene, the action reached a furious peak.

For nearly an hour, rods were bent, reels were screeching, anglers were whooping it up with unabashed joy and all was right with the fall blitz. And, then, as suddenly as it all began, the action came to a halt. Whether the fish were driven away by the assault from all directions, the bait managed to slip away or the predators simply decided to move on, the bite was over.

Such is the feast or famine nature of fall blitz fishing, and there was no complaining to be heard. Some anglers, in fact, relished the break, taking time to retie lines, rest weary arms, and trade tales of the ones that got away and a few that didn’t. Many would stay until the tide ran out; hoping for the fish to reload, but most departed the area, trying to figure out where the bass, blues and Fat Alberts might regroup. Several departed with the ultimate Northeast inshore feather in their caps – slams consisting of bluefish, stripers and false albacore caught in the same day. It’s a feat most likely accomplished during the fall run, and right now is prime time. 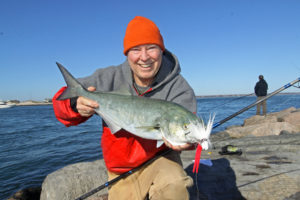 Bluefish have traditionally been the easiest species of the northeast slam to find. This year, however, they have been relatively scarce. Photo by Tom Schlichter.

BRING ON THE BLITZ

For Rhode Island, Connecticut, New York and New Jersey saltwater anglers, the stretch from mid-October through November is the period when blitz fishing conditions reach their zenith. As water temperatures quickly cool, baitfish spew forth from protected harbors, bays, rivers and tidal creeks to begin their migration toward warmer, southern climates. The massive exodus draws predator species tight to the surf or into the rips where they pin panicked baitfish schools against the sand or attack them in strong currents that provide the big and the strong with a significant maneuvering advantage. Follow the fishing reports and you can actually track the action from north to south as the blitzes spread from port to port down the coast.

Back in the spring, flooding tides often ushered in warming water and steady action. At this point in the season, however, outgoing water tends to bring on the best of the bite. With each receding tide, more and more baitfish flush out into open waters, adding daily to a giant, living chum slick that can stretch for miles along open ocean and sound beaches. Where this living slick meets up with stiff currents or roiled surf the action can explode at any moment.

Smart anglers maximize their efforts by trying to be in the right place at the right time. Veterans of the fall blitz tend to favor prominent points, beaches adjacent to inlets, strong near-shore rips, and coves and pockets where predator species can pin the bait against the beach. While there are times when the fishing will be hot throughout the day, the most intense action is generally tide specific. Stumble across a blitz, and there is a good chance it will repeat the next day in the same area, although perhaps 40 minutes to an hour later as the tide advances from one day to the next. 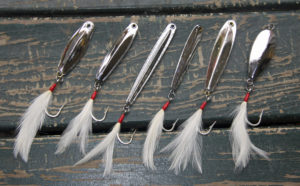 Ava 27 and 47 diamond jigs, Deadly Dicks, and the Hopkins Shorty are among the authors favorite tins for slam fishing. Pictured here is his ultimate choice: a set of Charlie Graves tins. Photo by Tom Schlichter.

Much has been written and said about tossing poppers, bottle plugs and even flies under fall blitz conditions and each of these approaches are valid. Still, the quickest way to a slam of bluefish, stripers and false albacore is to come armed to the gills with a selection of thin profile tins. With a single small to mid-sized diamond jig or spoon, you can cast a mile, work from top to bottom, vary your retrieve rate from fast to slow, and imitate a wide variety of baitfish.

Since many blitzes are short and sweet, speed is of the essence and no lure casts farther, requires less maintenance and covers water as quickly as a tin. Among my favorites are Charlie Graves tins, tubeless Ava 007, 27 and 47 diamond jigs, Hopkins’s Shorty hammered spoons, Deadly Dicks and SI Epoxy jigs, the latter being lead based but covered with a double-thick layer of epoxy for a more natural light reflecting surface.

All of these lures possess slender profiles compared to bottle plugs, poppers and swim baits, a trait which the albies find especially appealing and the bass and blues don’t seem to mind. Any of these lures can be matched to spinning gear in the 17- to 30-lb. class, with a six-and-a-half to seven-and-a-half-foot fast-action stick preferred when casting from a boat and an eight- to ten-foot rod a nice match from the beach. With either setup, attach the lure to the main line using a four-foot length of 20- to 30-pound test fluorocarbon leader material headed by a barrel swivel and terminated with a heavy-duty snap.

The low visibility of fluorocarbon line provides an edge when the sharp-eyed albies are feeding in clear water. The snap makes it easy to change lures quickly, which you may want to do if the albies show up because they often prefer smaller tins than the bass and blues. Many anglers, in fact, keep two rods rigged if they think false albacore are a possibility. One rod sports a standard 2- to 4-ounce diamond jig or similar tin for the bass and blues, the second stands at the ready for the albies with a smaller, 3/4- to 1-ounce tin, Deadly Dicks and KastMasters being common choices.

While just about any retrieve can make a tin productive when the blitz is on, keep in mind that bass, blues and albies do have preferences. Blitzing blues, usually, but not always, most prevalent, tend to favor a medium-fast to fast retrieve that keeps the lure two or three feet below the surface. Stripers, on the other hand, relish a slower retrieve that keeps the lure closer to the bottom. The albies, being the quickest of the three, love to have their speed challenged and react best to tins reeled at breakneck speeds just below the surface. 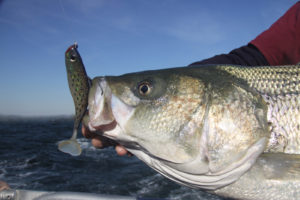 Striped bass are the largest of the slam competitors, sometimes topping 40 pounds. Photo by Tom Schlichter.

The season for scoring your first slam is all to short as the albies often depart by early November, so make your move right away if you hear the blitz is on. Be aware, however, that this is only the first step in this addiction. Toss those tins to get your first slam and you’ll be hooked on this challenge forever. Next, you’ll be looking to score a slam on lighter and lighter lines, with more than one type of lure and, finally, on the long rod. Like most other kinds of fishing, the possibilities for fun and challenge are limited only by your imagination.