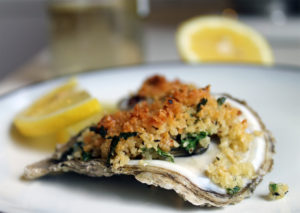 This is one of those recipes where everyone adds their own little twist. Few, however, prepare it better than Perry Raso, owner of the Matunuck Oyster Bar in the great state of Rhode Island.

This recipe first appeared in Coastal Angler Magazine. I liked it so much, I asked to share it with you. Publishers Lisa Helme and Mike Danforth were kind enough to pass it along. So, here you go. Enjoy!

Prep Time: 20 minutes once oysters have been shucked.

3. Add Pernod and ignite to burn off alcohol. When flame starts to subside, add cream and bring to a boil. Immediately reduce heat and simmer until reduced by 1/3. Do not allow to brown. Half-way through the reduction, add tarragon. Stir in salt and Parmesan and remove from heat.

4. In a separate saucepan or glass bowl placed in a microwave, wilt the spinach by placing it in a little water and heating until water is evaporated and spinach is wilted. Set aside. Meanwhile, crush crackers and saute lightly in bacon fat.

5. To prepare the Oysters Rockefeller, place 1 tablespoon wilted spinach (3-4 leaves) on top of fresh oyster in the half-shell. Then place a generous amount (depending on oyster size) of the prepared sauce on each oyster. Sprinkle generous amount of cracker topping over oysters so that there is an even amount on each oyster.

6. Place oysters in a baking dish, surrounded by mounds of salt to steady them if necessary, and cook for 10 to 15 minutes until golden. Serve with Mignonette sauce (optional).