THREE CHOICES FOR A SWEETER FALL 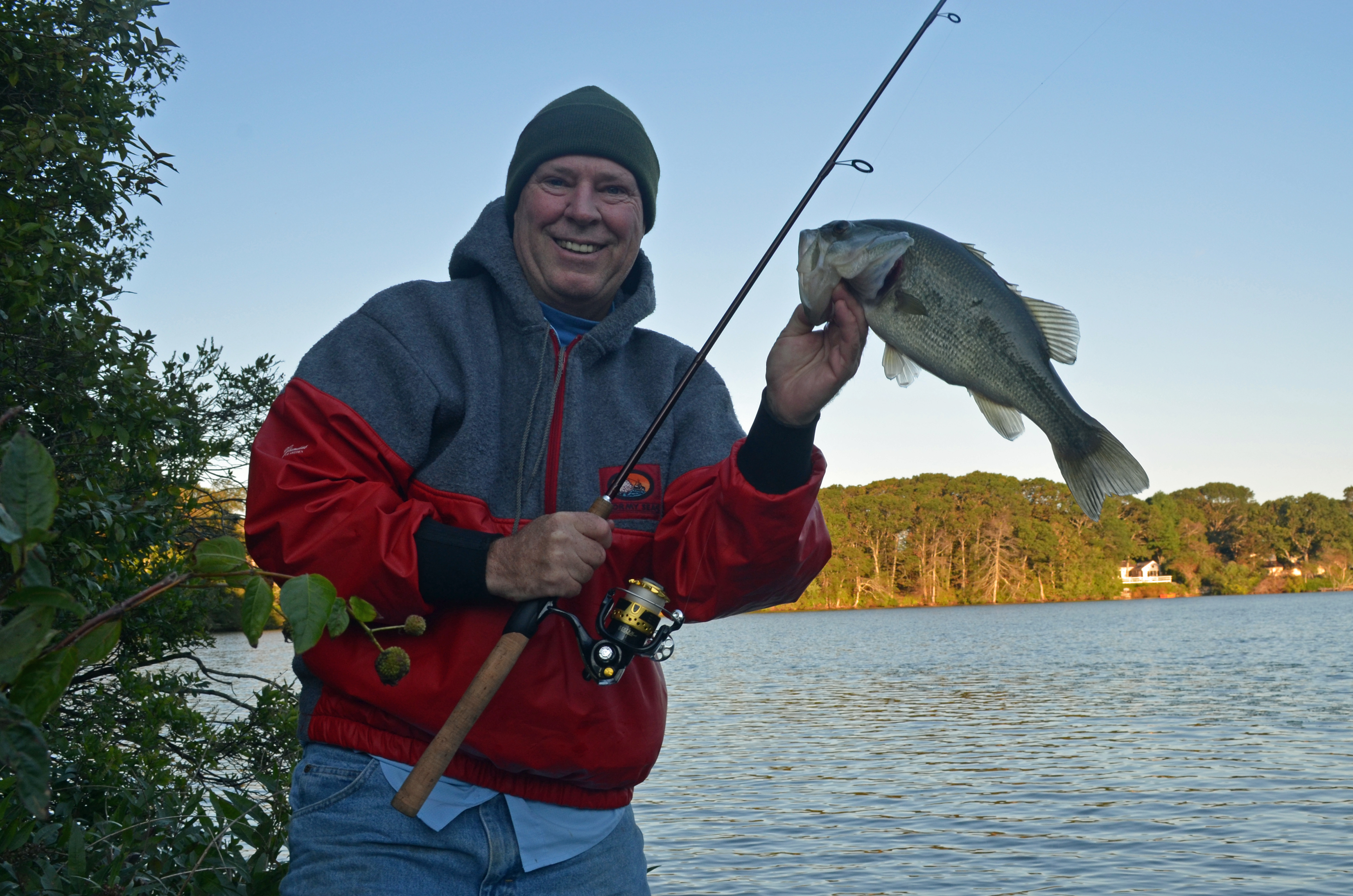 Work big, work slow and work on the edge of shade or in deep water if the fall sun is shining bright. Photo by Tom Schlichter.

With all the anticipation of the fall run of stripers, bluefish and false albacore that lights up the coastal waters of the northeast and mid-Atlantic during October and November, it’s no wonder many lakes and ponds are virtually untouched at this time of year. To be sure, I get in my fair share of action in the briny, but it’s also during this period that I hook-up with some of my biggest largemouth bass and pickerel of the season while enjoying sometimes being the only boat on the water. They’ll be plenty of time to target typical-sized fish as we push into the holiday season. Right now, though, the big girls want to come out and play. That means it’s time to move off the bank and break out some big, slow-moving targets – the kind that interests bigmouths in the 4- to 7-pound class and pickerel that can stretch the tape past 24 inches. The fall crush is a fleeting bite so get out now before the big ones slip into their true winter patterns.

While many sweet water fans realize that there is a fall run on freshwater lakes and ponds, few understand that it starts a sooner and finishes earlier than the saltwater runs. October and early November are prime time on most shallow lakes and ponds as water temperatures have already been decreasing slowly but steadily though September. Wait too long to make your move and you’ll be fishing for bass that have taken up more of a winter pattern than a fall binge feeding spree. To be sure, climate change is buying us a little more time these days, but only a week or two. If you are serious about getting some fast-paced fun with bigmouths, smallmouths, pickerel, walleye and panfish, you’ll be best off to try and squeeze it in before Veteran’s Day.

They’ll be plenty of time to continue fishing for typical-sized bass and picks after the fall binge, but the peak period when the big ones come out to play is indeed a short one. Some years it only lasts ten days, although two or three weeks is more generally the case. During this brief period, I put away the surface poppers, move off the banks and break out some big, slow moving lures. I’m looking to tangle with one or two big fish per trip at this point in time; a bucketmouth that might tip the scales at 6 or 7 pounds or a pickerel that stretches the tape 26 inches or more. 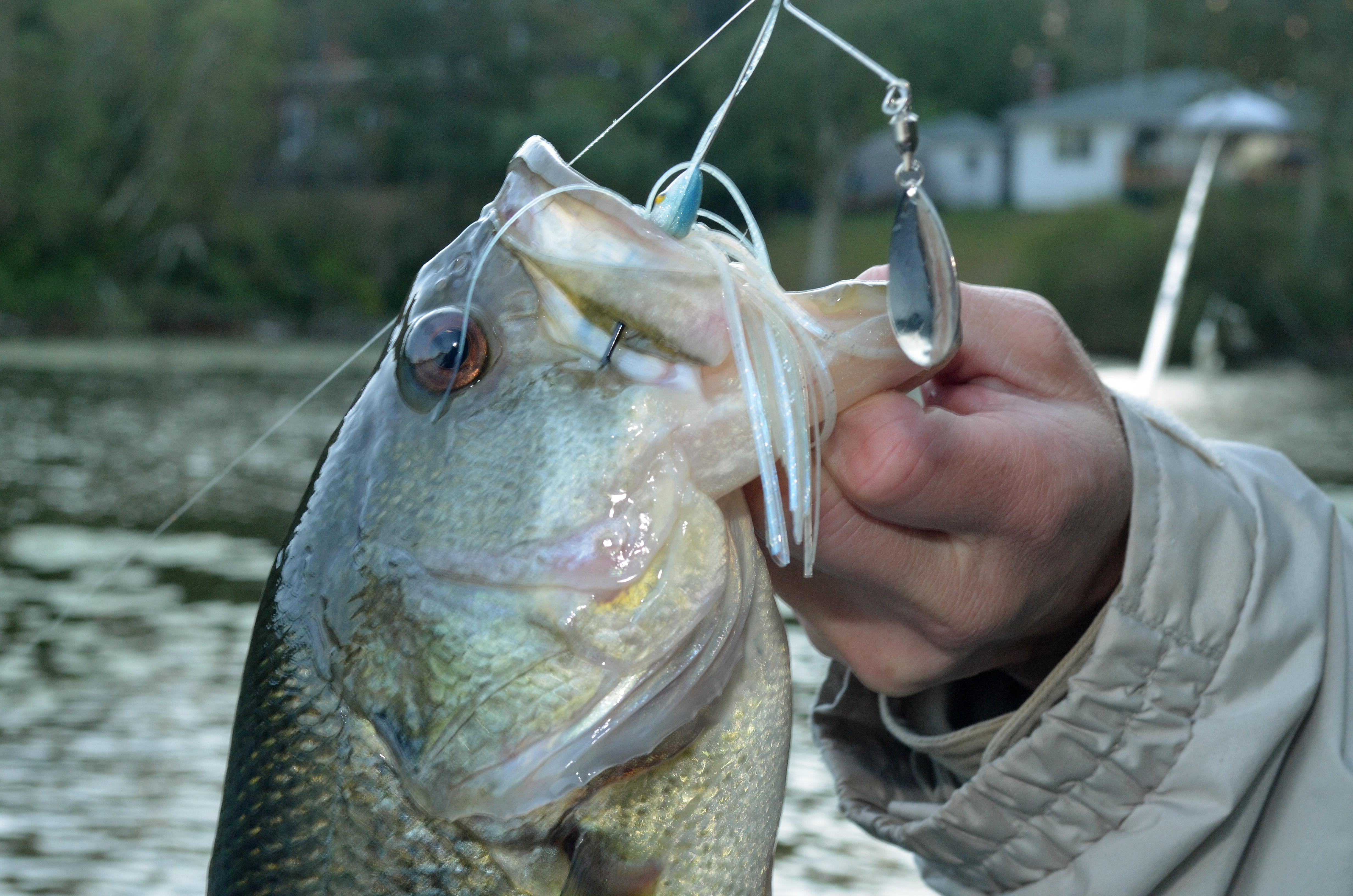 Big spinnerbaits are large targets that can we worked slow and deep. To add more mass, add a 4- or 6-inch curly tail grub. Photo by Tom Schlichter.

One of my favorite lure types for fall’s binge-feeding trophies are large spinnerbaits. A 1/2-ounce green Strike King is my traditional go to fall run safety pin lure, although I’ll sometimes toss a bright white Terminator Super Stainless Spinnerbait under cloudy skies or when working structure in water deeper than six or seven feet on big lakes. These I’ll slow-roll over any stumps or sunken structure I can find. Large spinnerbaits are also great for probing rubble on the bottom in eight to 12 feet of water, ideally where sand and mud bottoms meet. The key with these lures is to keep the retrieve slow, but always keep the blades spinning. You want the lure to present a large target that is barely making headway. Strike hard and instantly at any bump you feel – even if working around brush piles, stumps and boulders.

Another lure that turns the heads of big fish looking to beef up for winter is a large, scented or flavored plastic worm. Put away the small, 3-, 4- and even 6-inch versions and step up to a 7- to 10-inch worm with some heft and visibility. Berkley’s Soft Power Worm in black, motor oil or blue fleck color patterns works well, as does a 10.5-inch Zoom ‘Ol Monster Worm in purple. Rig these weedless style and toss either along the deep end of a downfall. Drag them gently up through the branches and pause for just a second before setting the hook if you feel a pick-up or see the line twitch. If you know of any deep holes in the eight to 14-foot range, toss a worm to the far side and retrieve by gently lifting your rod tip enough to glide the lure a foot or two above the bottom before letting it settle to sit still for several seconds on a slack line. This year I plan to go even bigger in the soft plastic department, trying my luck with something a little more chunky like a 10-inch Original Hogy or 12-inch Lunker City Slug-G0 generally reserved for striper fishing around rocks and boulders in salty environs.

The one counter to this big worm approach is to throw a Senko. Still, even with this, I’ll opt bit. Rater than toss a 3-, 4- or even 5-inch version, I’ll start with a 6-inch and maybe move up to a 7-inch. At that size, the dense Senko is plenty heavy for casting into the wind or keeping in contact with the bottom on a breezy day. It’s also long and thick enough to look like a substantial meal for a big bass or lunker water wolf. Black with blue flake and black with small red flake are my favorite cool water color patterns with these lures. 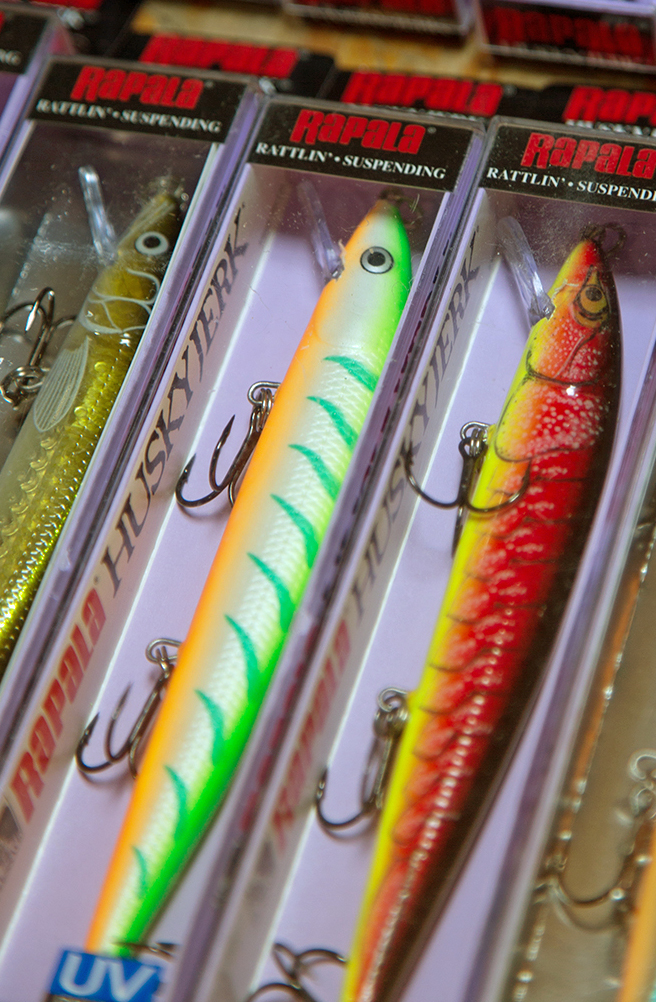 STICK IT TO ‘EM

If we are lucky enough to get a shot of Indian Summer, large hard plastic minnow imitations can also produce at this time of year. On those days when the sun warms the surface just a little bit, I like to toss 5- to 7-inch floating Rapalas – or even the wider profile Bombers – when I’m working open waters. These will sometimes generate a little action with 2- to 4-pound fish – but every once in a while they stick a good one. In fact, a few years ago, I caught and released a skinny 6.5-pound hawg on by working a 5-1/4-inch Rapala Original Floating Minnow along the back edge of a dying lily set.

After looking down the throat of that monster as I reached in to grasp the head my lure, I came away with one unshakeable thought: that beast could have easily crushed an offering twice the size of the lure I was tossing.