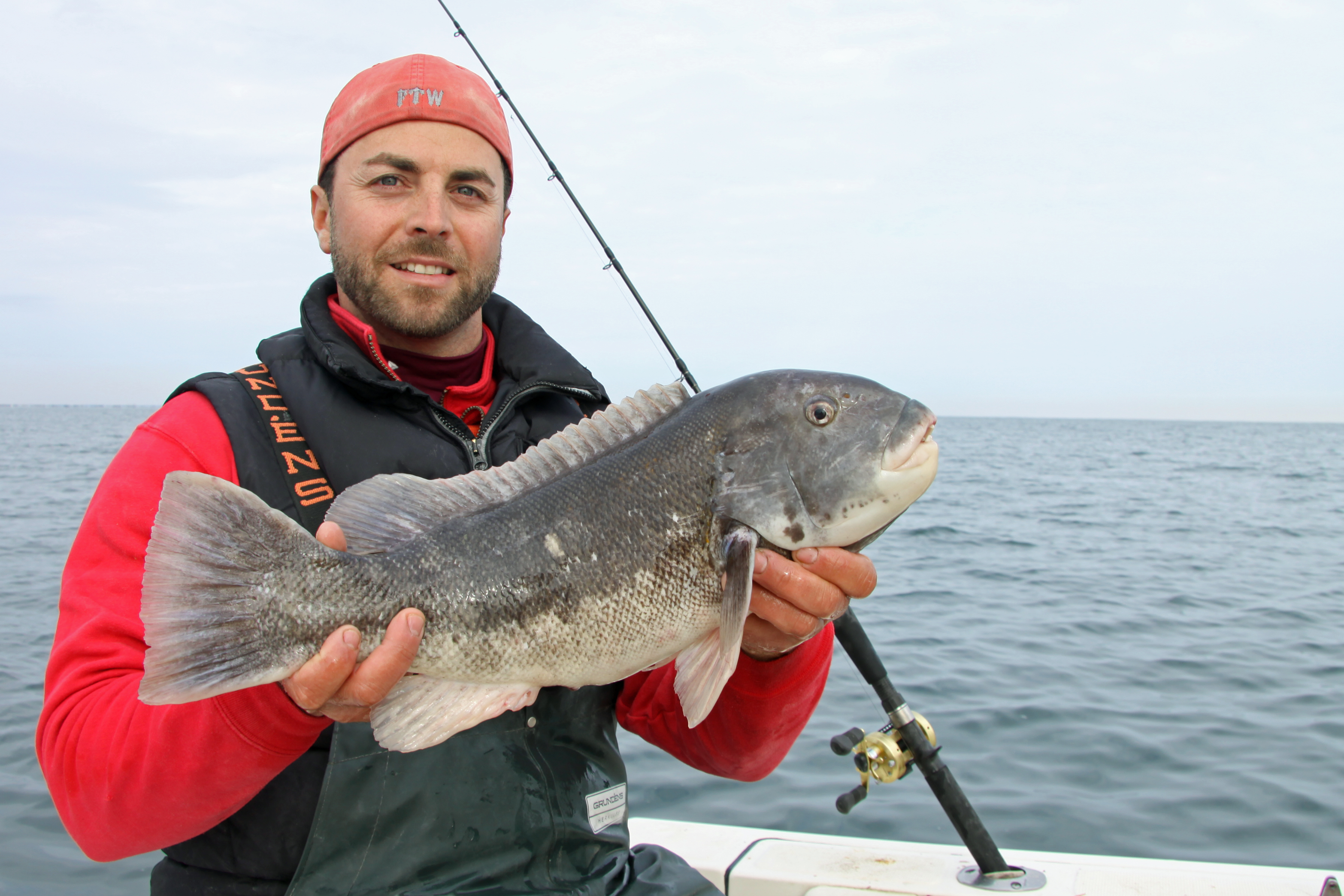 Finding overlooked structure is one way to up your blackfish scores. Here, Billy Taylor shows off his idea of a “typical” keeper ‘tog. Photo by Tom Schlichter.

For most any angler, expecting to catch a blackfish weighing over 10 pounds would be considered high hopes. For Billy Taylor, however, it’s almost second nature. In fact, the 36-year-old Amityville, NY resident considers 8- and 10-pounders to be “nice fish,” but nothing spectacular. That’s because he’s grown accustomed to catching much bigger ones over the past few years. He’s had numerous 8- to 14-pound lunkers, plus a couple in the 15- to 16-pound class. His top fish was taken in November, 2014 and it was one for the ages. At 22.53 pounds, it smashed the former New York State record of 21.55 pounds set by Gene Pitaro in December of 2011 aboard Captain Nick Savene’s No Time Charters, of Oceanside, NY.

“I absolutely love blackfishing,” explained Taylor one morning as we dunked crabs in 60-foot depths a short run outside of Jones Inlet on a mid-November morning a couple years back. “I’m consumed by it and I want to learn everything there is to know about how these fish feed, their favorite habitats, what triggers an aggressive bite and what shuts them down. I’ve got a pretty good handle on things already, but there’s still plenty to learn. That’s what I find exciting about this species. Blackfish, especially the bulldogs, are really quite challenging even when you get good at catching them.”

Like many local veteran blackfish from Rhode Island to New Jersey, Taylor picks November as the prime month for targeting bulldogs. At that point, he reasons, the bay action is drying up as the rubber lips head for deeper water where they’ll concentrate around wrecks, reefs, rocks and patches of rough bottom. No great surprises with that logic, except that it goes a lot deeper than you might expect.

“Just look at a blackfish in the late fall,” says Taylor, “and you know the bite is going to be hot. Catch one in the spring and it has white lips. Catch one now and there’s some red color around the mouth from eating all those rough-shelled crabs. Crabs like sticky structure, blackfish like crabs. Come the fall, those fish are going to go where they need to if they want a serious crab fix. I also think that blackfish feed better in clear water and by November most of the algae around here has died off enough to improve visibility substantially.” 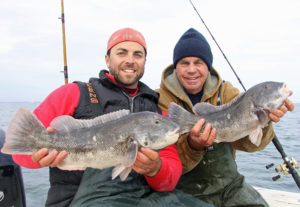 Bill Taylor, Jr. and his dad, Bill, Sr., show off a brace of November blackfish taken from a small, isolated piece of structure. Photo by Tom Schlichter.

And just what type of sticky structure is best for November blackfishing? Taylor claims that size doesn’t matter nearly as much as profile. The biggest blackfish, he believes, want to hide in caverns, holes, nooks and crannies. A little rough patch or a few scattered rocks might hold some decent fish but isn’t likely to interest monsters.

“I look for pieces that rise high enough off the bottom to offer a place for a really big blackfish to settle in and get out of sight,” states Taylor. “It should have cracks and cuts – places where these fish can simply disappear. I also want to find structure that isn’t getting worked too hard. Most of the big pieces see plenty of pressure, so I back off from these a little and probe the surrounding area looking for smaller chunks that have separated from a reef or sunken ship. Find one of these and you might have the fish to yourself. Those big blackfish, – the 14-, 16- or 20-pounders – get that size because they haven’t seen many baits over the years. They keep coming back to the same, unpressured spots. These are the places you need to seek out.”

Taylor invests a lot of time and gas patrolling the edges of well-known blackfish haunts looking for these smaller structure gems. He searches both during blackfish season and throughout the rest of the year. He’ll discover a piece and then give it a try when he thinks the time is right – which could be months after first spotting it with his electronics. It’s important, he notes, to not give up on a place that appears to have great potential. You’ve got to try it on all tides, with different wind directions, and at different points during the blackfish season to see when it loads up.”

According to Taylor, true bulldogs can be found as shallow as 40 feet in early November. By month’s end, they might be as deep as 80 feet of water. As a rule, he says, the biggest fish feed best when surface temperatures are around 50 degrees but turn off at the 40-degree mark. They’ll bite just a little longer in areas that tend toward a muddy bottom since those hold the heat a bit longer than sandy bottoms.”

Taylor also likes to double-anchor whenever possible, even on the smallest pieces. This, he believes, allows more precise fishing that enables anglers to probe every inch of suitable structure. He prefers a north wind whenever possible because it’s slightly buffered by land, allowing the boat to sit well on the hook.

“I like to feel along the bottom for high points,” he continues. “I know that blackfish are supposed to hug the bottom, but I often find them a foot or two above on a higher profile.” This, explains Taylor, is especially true in rough seas. Blackfish, it seems, love to be in the thick of things under calm conditions, but they may move to the edges of structure or even slightly off a piece when significant swells threaten to beat them up. 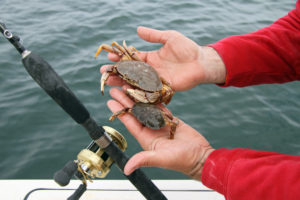 “You need good current and/or a bit of wind to anchor precisely over a small piece of structure, so the best conditions for anchoring might not be the best for the fish to feel comfortable,” reveals Taylor. “On the rougher days, I’ll work the edges of the wreck or I’ll probe the bottom with my sinker until I find a high point and try to get my bait to sit right on top of it. Here, just a bit outside the nastiest snags, big blackfish can dine more easily without getting pounded against the wreck.”

Taylor also points out that blackfish favor different parts of wrecks or structure – even tiny ones – on different stages of the tide. In a soft current, they’ll likely be toward the up-tide end. In a stiff tide, they’ll slip to the back or move more down-current.

“Each piece is a little different,” states Taylor, “and that’s the challenge for a skipper – figuring out the sweet spots for different tidal stages. Most skippers are too aggressive when the fish don’t bite right away. Sometimes, you’ve got to wait a while for crab baits to work their magic. Other times, all that’s needed is to loosen or take up a few feet on one of the anchor lines to slightly adjust your position.”

In other words, it takes a lot of patience and more than a little work to get things perfect. For those who invest the time and effort, however, the treasure can be black gold.

While on the subject of finding the special places that hold the biggest fish, Taylor also made it a point to say that a lot of the big fish he catches are released.

“A fish that weigh’s into the ‘teens is probably 30 years old or more,” he states. “One pushing 20 pounds might be over 50 years old. It’s important to respect these fish and release those that come up in good shape. Unless it’s your biggest blackfish or you are pushing a record, let the monsters go. Three- to 4-pounders taste best, anyway.”