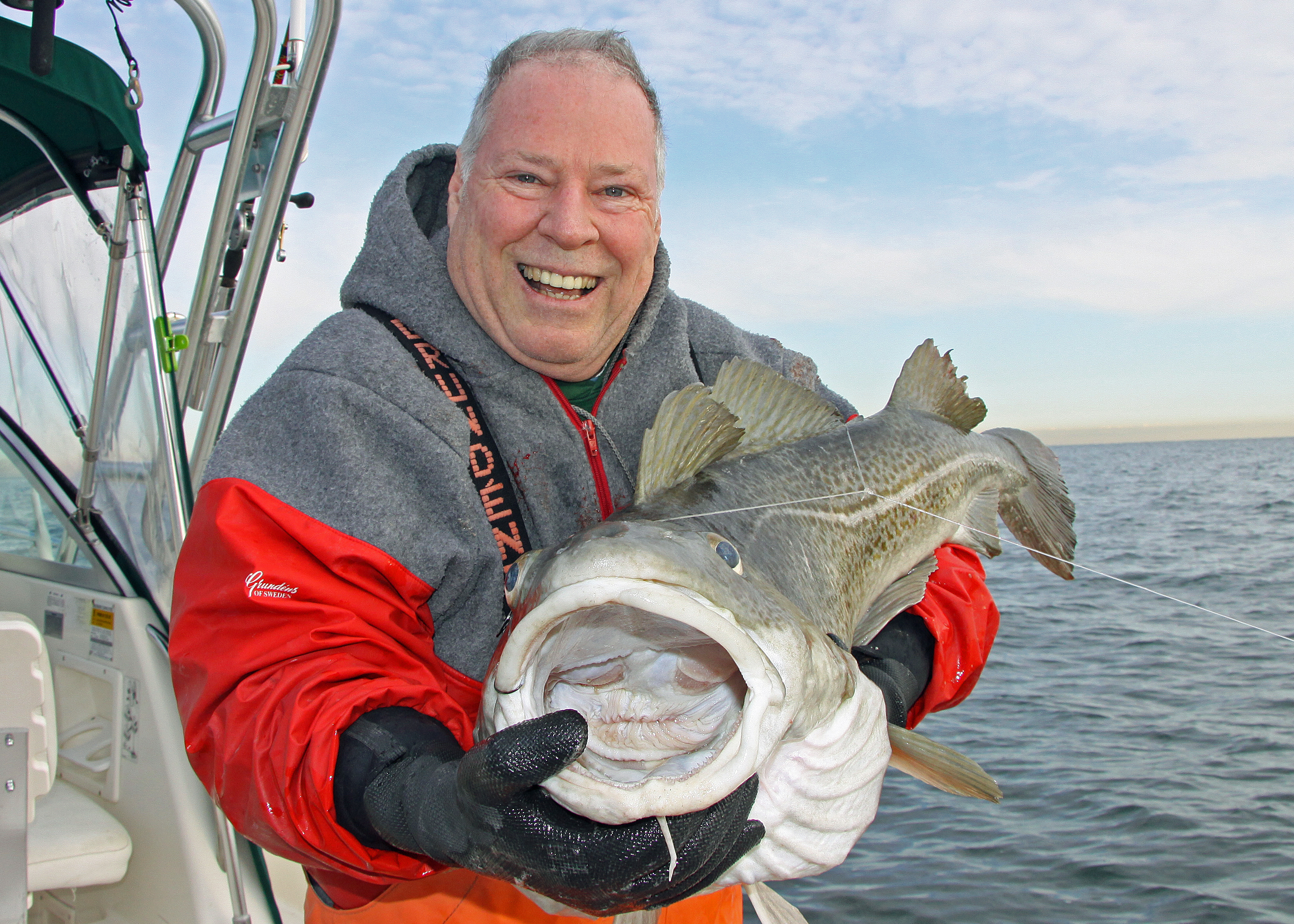 Few feelings can match that of decking a soaker codfish. Dressing for the elements and picking a calm day on which to sail help heighten the experience. Photo by OutdoorTom.com.

If you are new to winter cod fishing, let’s get one thing straight right up front: it’s a cold and unforgiving sport. Sure, the rewards can be fast action and a cooler filled with tasty fillets, but hawkish winds, bitter temperatures and a little rock and roll surface action can put even diehard angles to the test.

Now that I’ve put a little scare into you, let me assure you that it’s easy to get hooked on cod fishing if you figure out the basics. With that thought in mind, here’s a half-dozen tips the sharpies use to make sure each trip to the cod grounds is well worth the effort.

Many novice cod anglers assume winter cod fishing is a wrestling match pitting heavy weights and giant rods against lunkers that suffer “the bends” half-way up from the bottom. That may be the case on offshore wrecks during the summer, but winter codding is generally concentrated in 60- to 140-foot depths. This allows anglers to use 30-pound-test mono or 50-pound-test braided setups that are quite sensitive and provide the cod a chance to put up a respectable battle. Think of your favorite conventional striper or bluefish setup – or your deep-water blackfish setup – and you’ll be on the right track.

Whether you drift or anchor, a high-low rig featuring 5/0 sproat- or octopus-style hooks will get the job done. Many anglers prefer a larger, 6/0 or even 8/0 hook, but it’s simply not needed for the winter game. Most of the cod you’ll catch will weigh less than 12 pounds, and a 20-pounder will usually win or at least contend for the pool. Besides, a 5/0 has plenty enough holding power to deck anything that swallows it. So does a 3/0 Octopus style Gamakatsu.

Overall, it’s better to be a hook size smaller than a hook size too big. Place the bottom hook 20 inches above a bank sinker and the top hook at belt height. Expect to need eight to 10 ounces of lead to hold bottom but be ready to fish with six ounces if the wind and current will allow. Remove the lower hook if snags or nuisance fish are a problem. Take off the top hook if the doggies begin to bark. 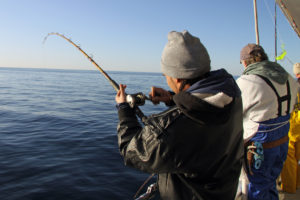 Set the the hook with a smooth lift and then reel at a steady rate to keep cod from coming unbuttoned. Photo by Tom Schlichter.

When it comes to bait, skimmer is king – but the vital point is to avoid overloading your hook. Look around the deck and watch the veterans that are catching the majority of the cod on any trip. Guaranteed the majority of them are using strips of clam cut into long, thin ribbons. Cut your strips to be about an inch wide, making sure that each piece has a part of the hard rim to anchor the hook. Wrap the middle of the ribbon around the shank, pass the hook through again and leave the end to flutter free in the current.

The prime pieces of bait in the bait bucket are always the siphon (neck) with some stringy, trailing ribbon. When you get one, thread the siphon over the point and up the shaft, then wrap the ribbon once or twice, and allow two or three inches to trail off the hook. Keep in mind that with clam baits, the full point and barb section of the hook should always be fully exposed. 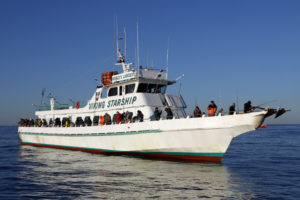 While cod can be caught on private boats with good range, using the for hire fleet makes a lot of sense during the winter months, especially from a safety standpoint. Photo by Tom Schlichter.

It’s important to keep in mind that codfish like to hang around structure – but they aren’t always pegged to it like blackfish and sea bass. Often, when a party or charter skipper anchors on a wreck, anglers will work hard to get their baits right in the sticky stuff. That approach pays off for ‘tog tuggers, but cod are most often found holding around the edges, or even slightly off a wreck if they are feeding on herring, mackerel, sand eels and other baitfish.

Start out fishing tight to any structure your skipper puts you over, but don’t be afraid to probe the perimeter and then gradually work out into the surrounding area if the cod don’t respond as anticipated. The mistake novice anglers make in this scenario is to assume, after a few minutes of no luck, that the cod are absent. Just because they aren’t stacked directly over the structure doesn’t mean they aren’t nearby. Probing away from any solid structure is also likely to increase your chance for catching large, tough fighting and delicious pollack.

December, January and early February tend to see codfish feeding on herring, mackerel and, possibly, sand eels. Late winter, after the baitfish schools thin out, finds the codfish in more of a scavenger mode. That means you should expect to diamond jig through mid-winter but plan to dunk bait from Valentine’s Day through April. It’s not a hard rule, but it makes sense most years.

When the cod are hot on jigs, anyone can catch. It’s not much different than jigging stripers except that the water is deeper. Hop the jig off the bottom with a quick upward snap of the rod tip, then crank at a medium to slow speed for eight to ten turns of the handle before repeating the process. While it always feels good to start with a brand new jig, I like to add a few dings to mine. Before I even tie on a new jig, I’ll bang it against another one, trying to chip or dent the finish. It’s an unscientific observation, but the broken flash reflected by scuffed jigs just seems to bring more hits than the shine of a brand new, unmarked slab.

If the cod are thick and you want to score some double-header catches, use a dropper loop to tie a pink jelly worm, curly-tailed grub or surgical tube teaser 20 to 30 inches above the jig. No matter what time of year, break out the diamonds if you see a few pollack start coming over the rail.

REEL WITH A PURPOSE

I find it amazing how many cod are lost after being hooked. I would expect it of the big fish, but even market cod seem to have a knack for shaking loose by the half-way point. I think the reason that baccala slip the hook most of the time is because anglers crank them viciously toward the surface. Take your time reeling up once you’ve stuck a solid fish. Reel with purpose and keep the line taught at all times. Raise the cod quickly off the bottom with the hook set, then crank steadily at a controlled pace to bring your trophy to the surface.

Many large cod are lost as anglers bounce their rods up and down during the battle, others have the hook tear out while simply being horsed to the surface. Take it easy and you’ll deck more and bigger fish. 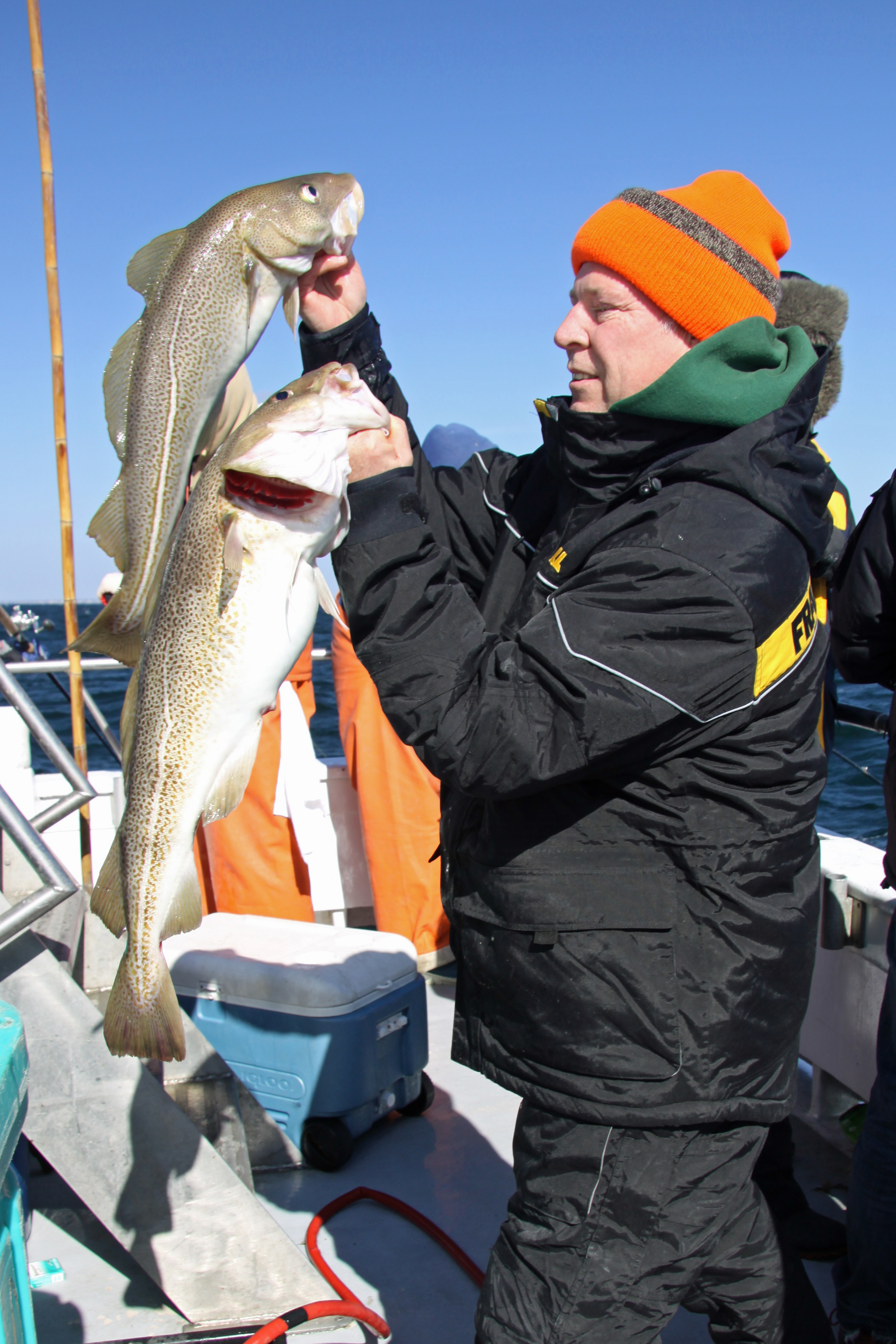 A two-hook bottom rig baited with skimmer clam siphon slices tempted this brace of cod for the author. Photo by OudoorTom.com.

As is always the case with offshore winter fishing, you’ll need to be prepared to deal with the elements. It gets cold on the water during the winter months so come prepared to deal with sub-freezing temperatures and a hawkish wind. Dress in layers with thermals or insulated long underwear as your foundation, wear waterproof boots and fluffy socks, a knit hat, hooded sweatshirt, and a pair of neoprene or waterproof gloves. Bring along your rain slicks, plus a couple of rags to help wipe water and fish slime off your hands and gear. For several years now, I’ve been wearing a Frabil FXT Stormsuit. Expensive, yes, but the combination of bib and jacket sure does keep me warm and that equates to more time at the rail.

Naturally, you’ll want to pick the mildest of days to sail as cod seem to bite best when calm seas allow baits to rest steady on the bottom, but be advised the weather can change dramatically in the course of the day. In other words, that sunny, windless, 40-degree morning can vamp into a snotty, 28-degree cloudy afternoon so consider yourself warned.

Nearly as important as picking a day to sail on which the wind and temperatures are agreeable, is planning your trip to coincide with gentle tides. Full moon and new moon phases generate the strongest tidal currents and are best avoided. Granted, braided lines allow you to get to the bottom with reasonable weights even in strong currents, but I think those strong currents also push the codfish around to the point where they just hunker down and lay low. Fish the one-quarter, one-half and three-quarter moon phases and you’ll do better in the long run.

Consider that a bonus tip.