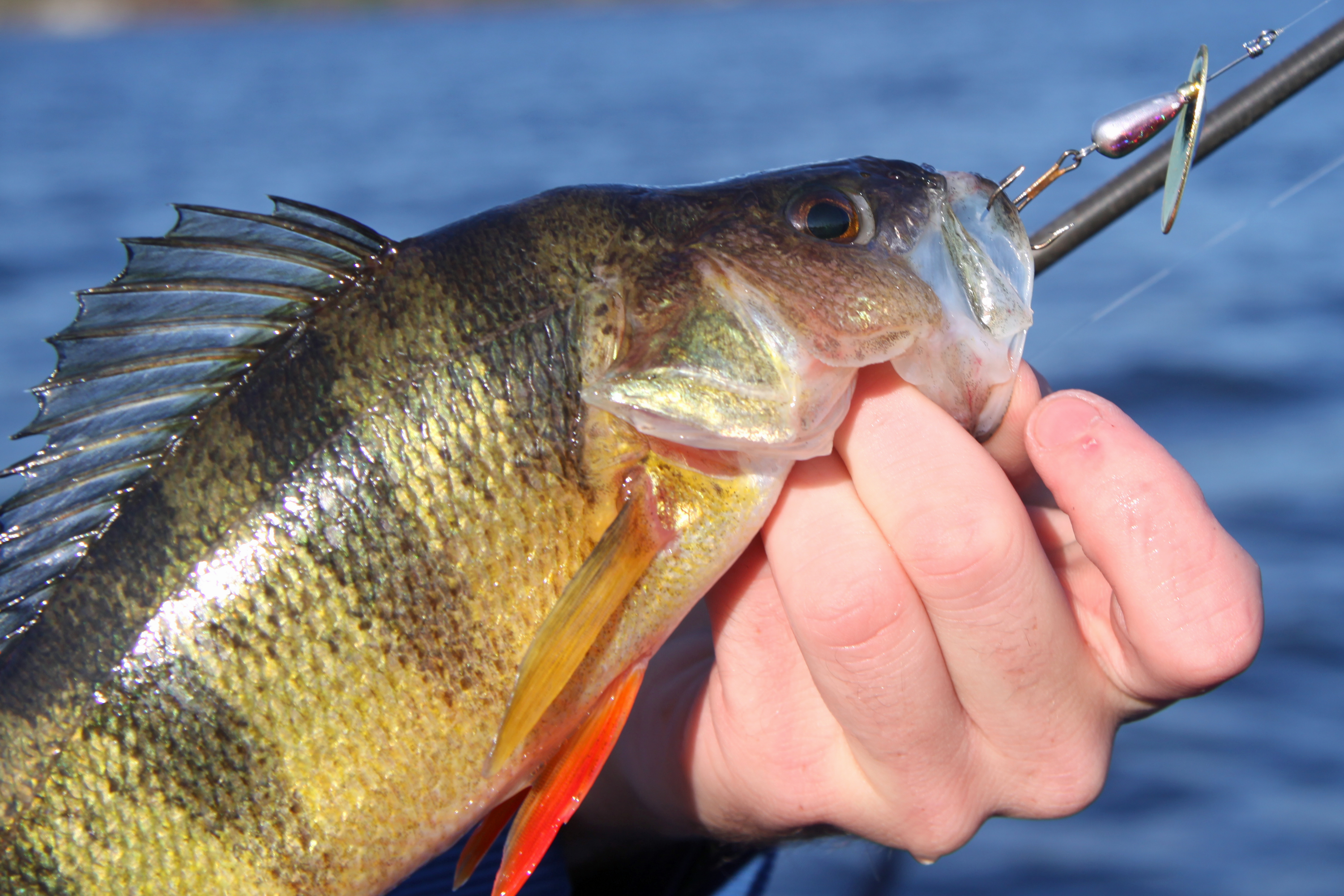 Small, in-line spinners can be cast or trolled during the winter months to entice a wide variety of panfish including huge yellow perch. Photo by Tom Schlichter.

It was 37 degrees with a slight breeze as I drifted out from the shoreline flat toward a pocket of deeper water. Not exactly the kind of weather in which you break a sweat. But, as I wiped the beads of salty water from my brow, removed my wool-knit hat and unzipped my jacket, I couldn’t help but chuckle at how warm the day seemed to feel.

Actually, it was only my internal temperature on the rise – a result of working so hard catching fish. Over the past hour I had released more than a dozen yellow perch to 14 inches, a 16-inch brown trout, and a 24-inch pickerel. Not bad for a Christmas break freshwater fishing trip.

Freshwater action in the dead of winter? It’s not always red-hot, but it can be consistent and there are days that literally smoke. And why shouldn’t you be able to pull a few fish from chilly water? After all, ice-fishermen do it all the time.

I’ve had quite a bit of success over the past few years tempting fish between Thanksgiving and St. Patrick’s Day. More often than not, I’ve also had the lakes, ponds and rivers to myself. Following are a quartet of techniques that can bridge the gap between late fall and the formation of solid ice, and again from ice-out until temperatures rise enough in early spring to send fish heading for the shallows. Give them a shot and extend your fishing season right through the New Year.

This may sound hard to believe, but it is possible to slow-troll pickerel, bass, perch and sunfish in shallow lakes and ponds during the dead of winter. The keys are to troll slowly, use ultra-light tackle, and scale down your lure size.

I like to troll in the late afternoon after the water has had time to reach its maximum temperature for the day. Mostly, I’ll troll along the sunny side of shadow lines or along contour breaks where the water drops off from one or two feet deep to four or five-foot depths. I’ll also take a pass or two along any sharp phragmites wall that stands in two or three feet of water. 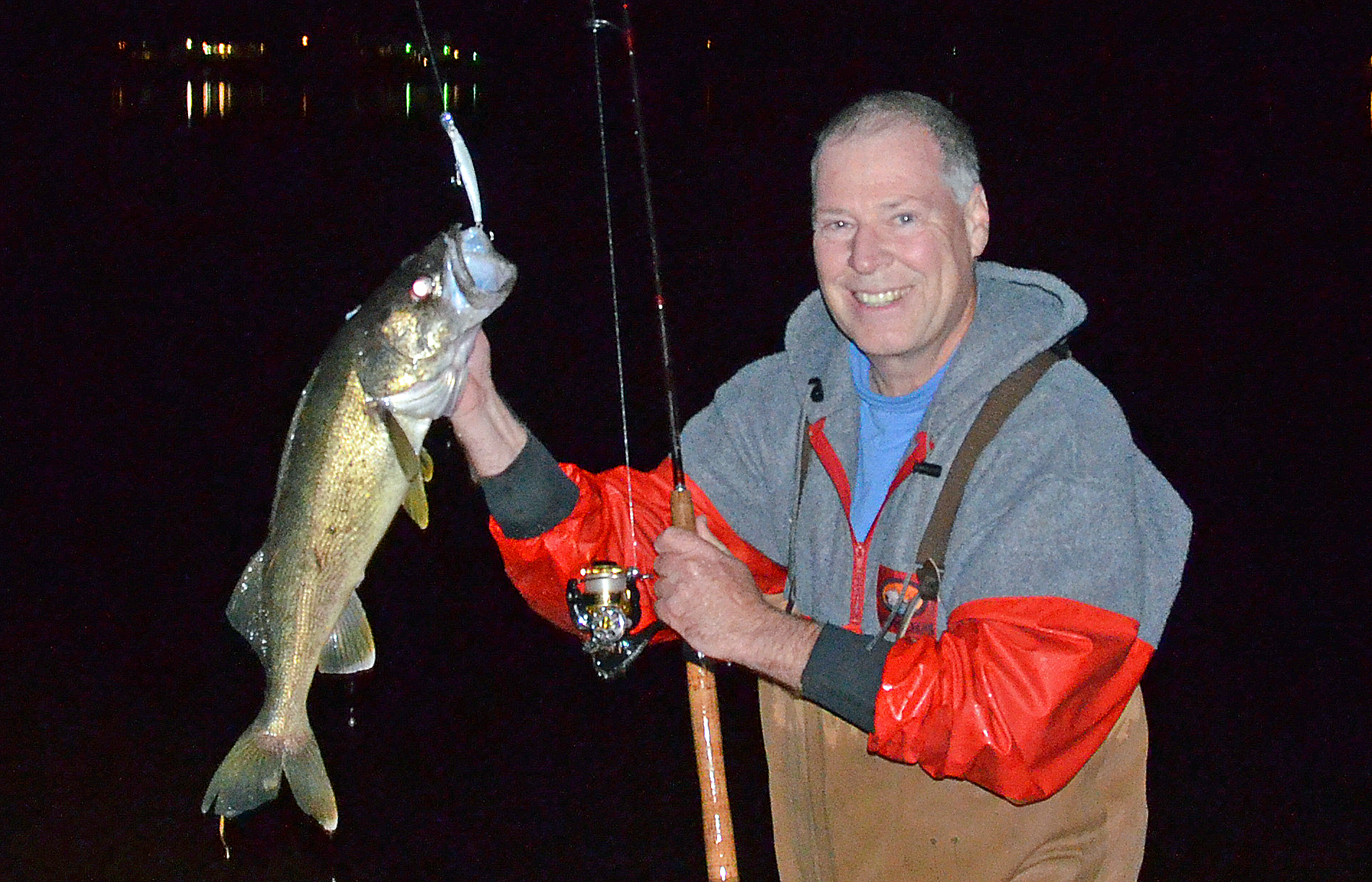 Top choices for slow trolling include small floating or sinking Rapala, Rebel and Yozuri plugs. Work these from an ultralight set-up with four-pound test line. Lure size should be two-and-a-half to four inches. Black and silver, gold, and sky blue have been my most productive winter patterns.

Using this setup, it is possible to troll your floating/diving lures six inches to a foot below the surface, which, on many shallow lakes and ponds, allows the lure to glide just above submerged weeds. To work deeper, select a sinking plug and you should be able to get down three to four feet.

This technique works particularly well on the sunny side of a lake or pond, and in waters where you can troll up close to the inflow from a stream or brook. It’s also productive working over those same weed-chocked flats that are so difficult to penetrate in the summer. It’s not the kind of technique where you’ll hammer fish after fish, but you may be very pleasantly surprised at the size of some of the pickerel and perch you’ll work up.

An added benefit of slow-trolling during the winter is that the gin-clear water allows you to thoroughly inspect the lake bottom as you move along. Using a pair of polarized sunglasses, you’ll be able to spot submerged rocks, timer, wrecks, ridges, humps, slopes and ledges, increasing your options for next summer.

Casting in-line spinners over open water can be a fun way to cover a lot of ground and locate schools of sunfish, trout, yellow perch and white perch.

I think of this fishing as “blind casting.” In other words, I don’t really use it to work any particular type of structure or area. Instead, I use it to probe open waters looking for suspended schools of fish. The method is especially productive with members of the perch family, and it works well with walleye, too.

Again, ultra-light tackle is the key. Tie a small Mepps, Blue Fox or Panther Martin spinner directly to a four-pound-test spinning outfit and you are set to go. Position your boat over relatively deep water, cast out as far as possible, and retrieve just fast enough to keep the blade spinning. Start by working your spinner just below the surface and probe a foot or two deeper with each succeeding cast to the same area. Count down from the time your lure hits the water to keep track of retrieval depth. Tipping one point of your treble hook with a “spike” or meal worm adds a bit of extra scent and taste to the lure and definitely seems to help generate more strikes.

Although I usually reserve this technique for water depths of six feet or more, you can opt for a larger spinner and work the deep side of shoreline points in waters known to hold pickerel. Also, on windy days, you can substitute a tiny KastMaster lure for the spinners to defeat the wind. 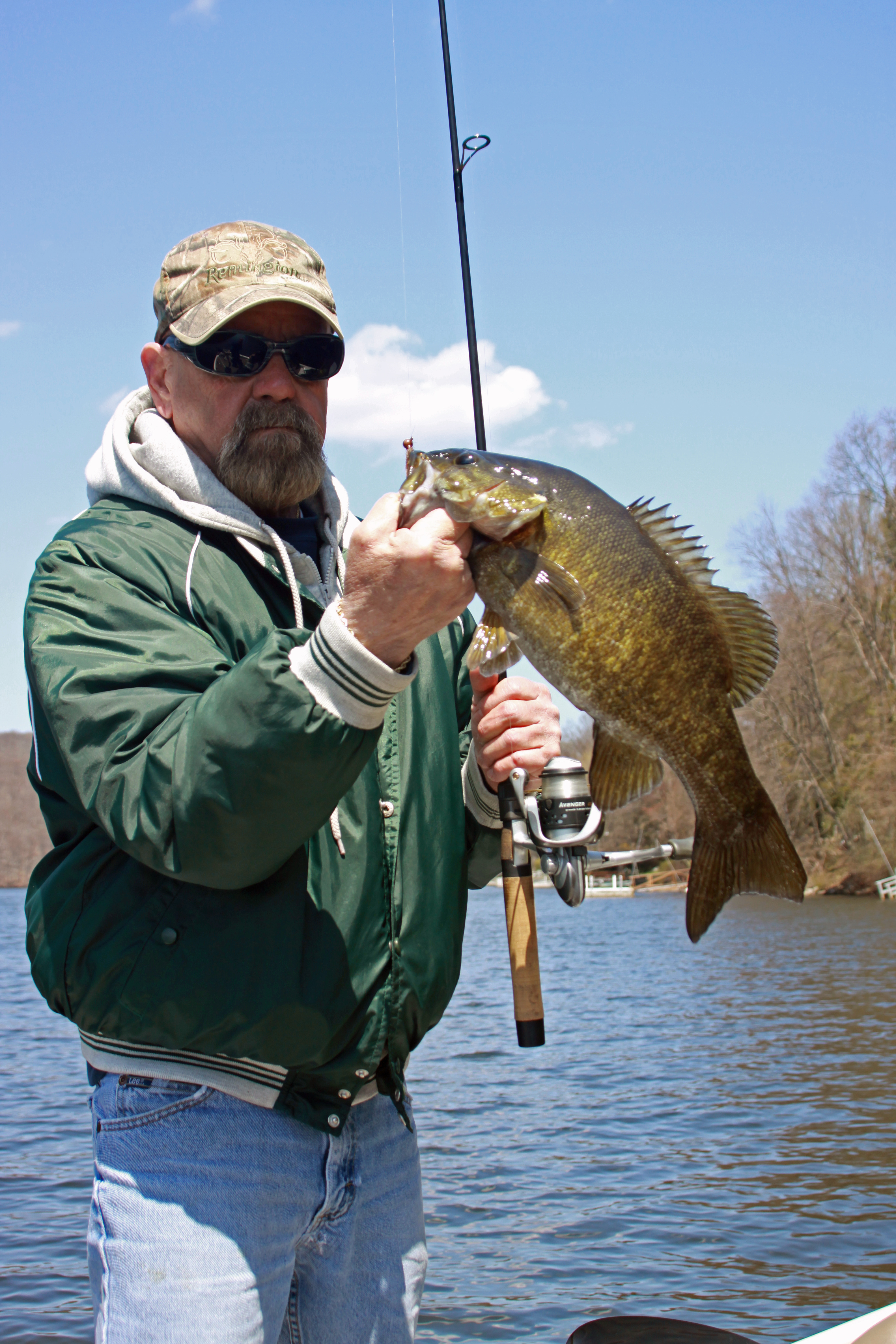 This is perhaps the most productive means of tempting white and yellow perch, crappies and panfish during the winter months. Select a one-thirty-second or one-sixty-fourth-ounce white or yellow jighead and slide a one to two-and-a-half-inch chartreuse, yellow or white curly-tail grub up the hook shaft so that the curl tail faces up. While unscented grubs will catch fish, especially if tipped with a spike, Berkley Power Grubs are the way to go these days.

Fish this jig from the same ultralight setup as used for slow trolling and casting spinners. Simply head out to the nearest channel edge or an area of deep water exceeding six feet. Cast out and allow the jig to settle toward the bottom, beginning your retrieve just before the lure settles into the weeds or muck. Instead of reeling in, lift your rod-tip slowly to gently glide the lure two to three feet off the bottom, then drop the rod tip and retrieve the slack as the lure free-falls.

Strikes usually register as a slight tap or gentle weight at the end of the line as you lift the rod, although astute anglers may also notice a line-twitch on the drop. Either way, simply lift with a slight bit of force to set the hook.

DRIFT-FISHING WITH WORMS OR MINNOWS

Looking for a trophy fish? Then live bait is definitely the way to go. Trout, bass, hump-backed yellow perch and pickerel are all very susceptible to a live minnow or night crawler drifted slowly just above the bottom. The key is to try this technique on days when the wind blows gently so that you slowly cover ground while keeping your bait deep.

Choose live bait drift fishing on deep waters, especially those with rocky or sandy bottoms and little in the way of weed cover. If the wind will permit, drift along changes in bottom contour, across the mouth of a cove, or down a significant slope leading from a flat to deeper water.

While most winter fishing is best accomplished with ultralight lines, you can go a bit heavier with this technique. Select a rod with a hint of backbone and spool up with six- to eight-pound test line. Tie a pre-snelled, size four, beak style hook directly to the main line and add a one-thirty-second to one-quarter-ounce split-shot about two feet ahead of the hook. Split-shot weight should depend on drift speed with the heavier weights used on windy days when it can be hard to keep a bait down deep.

For bait, live shiners are king if you can find a bait shop that carries them. Night crawlers, the universal bait, work nearly as well on the drift and increase your odds of enticing panfish.

As with jig fishing, most bites using this method will register as a light tap or heaviness at the end of the line. Lift gently, with just enough force to drive the hook home, and you should do just fine.

Winter fishing can be surprisingly productive on the freshwater front, especially in deeper lakes, ponds and rivers. As a rule, the same areas that produce well for hard water anglers also produces solid action just before the ice forms and immediately after it melts. Be sure to dress warmly before heading out to give this fishing a try because even a 40- degree day on shore can feel quite bitter with a little bit of wind on the water.