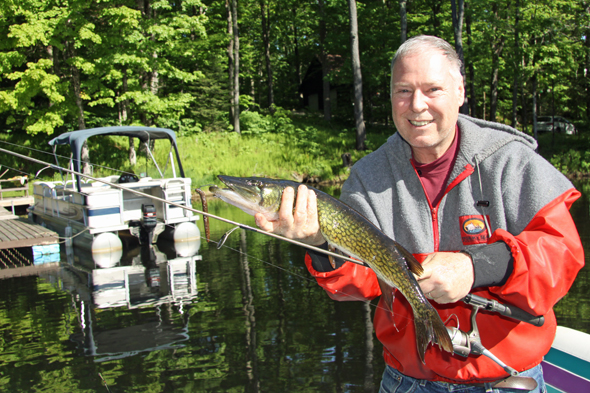 Big pickerel are aggressive feeders during May and early June. Although the author hooked this brute with a plastic worm, he prefers to target the water wolves with more flashy lures. OutdoorTom.com photo.

Lean, green and mean, pickerel are often sulky predators with a chip on their collective shoulders. Indeed, there are times I look at this fish and wonder why it seems so introverted and angry. Why would a fish so successful in its native niche have such a downright nasty attitude?

Okay, so I’m guilty of a little personification when thinking about this smaller cousin to the northern pike and muskellunge. Still, the comparison helps remind me to fish in an intrusive manner intended to provoke these fish into striking out of sheer malice. This I do by tossing large flashy lures right into the pickerel’s lair and dragging them close past the fish’s snout in an apparent show of disrespect to that get-out-of-my-face demeanor and fearsome set of pointed dentures.

MAY IS PRIME TIME
A favorite target of ice anglers, pickerel are active throughout the year in our waters. Still, it’s hard to beat when it comes to fast action and big fish. During early spring, pickerel have run of the shallows with little competition from bass and panfish. As May progresses, however, they face increasing challenges, especially from largemouths and crappie. That can really put a chip on the shoulders of bigger picks resulting in trophy encounters. By mid-June, with waters warming rapidly, the biggest water wolves will slip out to deeper water where they’ll sulk away most of the summer. Right now, however, they are still patrolling the edges of shallow flats bordering channels, slopes, or other passages that gently lead away from the bank. 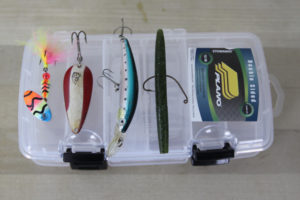 Flashy colors and large size lures attract late spring pickerel. When it comes to spinners and spinnerbaits the bolder the offering the better. Photo by “Outdoor Tom” Schlichter.

Like largemouth bass, pickerel are fond of holding near structure but they tend to prefer three distinct types: well-defined weed edges, submerged dead logs, and stumps. Locate any of these fish magnets this month in three to five feet of water just outside some old panfish spawning beds and you’ve got the perfect pickerel habitat.

Although small pickerel can be very aggressive at times, the larger ones are definitely more cautious. Often it takes several casts to the same spot before a big pick will intercept a lure. I’m not sure why, but fish over 24-inches in length frequently ignore the first or second pass of an artificial before exploding on a third, fourth or fifth retrieve. The point is, if you have a spot where you suspect big pickerel lurk, work it thoroughly before moving on – and then come back and work it again later if you failed to connect.

SHOW ‘EM SOME FLASH
Metal lures make a lot of sense when targeting these toothy predators. First off, an in-line spinner, spoon or spinnerbait isn’t likely to be torn apart like a plastic worm following repeated pickerel attacks. Secondly, picks seem to be highly attracted – perhaps even enraged – by flashy lures.

My favorite pickerel tempters include the Blue Fox Super Vibrex in-line spinner, white or chartreuse spinnerbaits with sliver Colorado blades, and silver Johnson Sprite spoons tipped with pork rind or a soft-plastic trailer. Toss the spoons into heavy weeds but use spinners to work weed edges and the fringe areas around submerged timer.

As a rule, you’ll find pickerel near structure – but not glued to it like bass. Therefore, it is vital to work the perimeter around dead timber and several yards out from the edge of docks, points or weed edges. When working phragmite or cattail stands, cast parallel to the tall stalks while keeping the lure three to eight feet away from the edge. 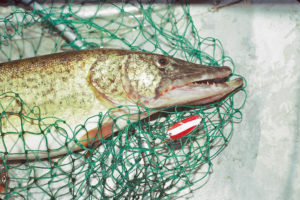 May is prime time for big pickerel. Although tough fighters, pickerel require a little TLC on the release to ensure survival. Photo by Tom Schlichter.

Pickerel strike plenty of other lures with abandon including floating minnow imitations, Mepps Black Fury in-line spinners, Dardevle spoons and plastic worms, so feel free to experiment. Just keep in mind that the water wolves aren’t as tough as they appear once caught. When unhooking them for release, use a firm grip behind the gills to secure the fish, remove the hooks with a long-nosed pliers, and gently revive the fish by easing it forward and back so that water washes over its gills. Be aware that pickerel which see heavy-handed or awkward releases rarely fair well.

Some bass fans berate these noble, well-camouflaged attack missiles. I welcome them with open arms. They fight as well as bass, grow longer, jump during battle and peel drag at what can be an alarming rate. Sure, they’ll clip a few lures from the end of your line during the course of a season, but that seems a small price to pay to mix it up with such a willing combatant. Come June, I’ll be focused on bigmouths. Through the end of May, however, I make no apologies for purposefully targeting these noble warriors.