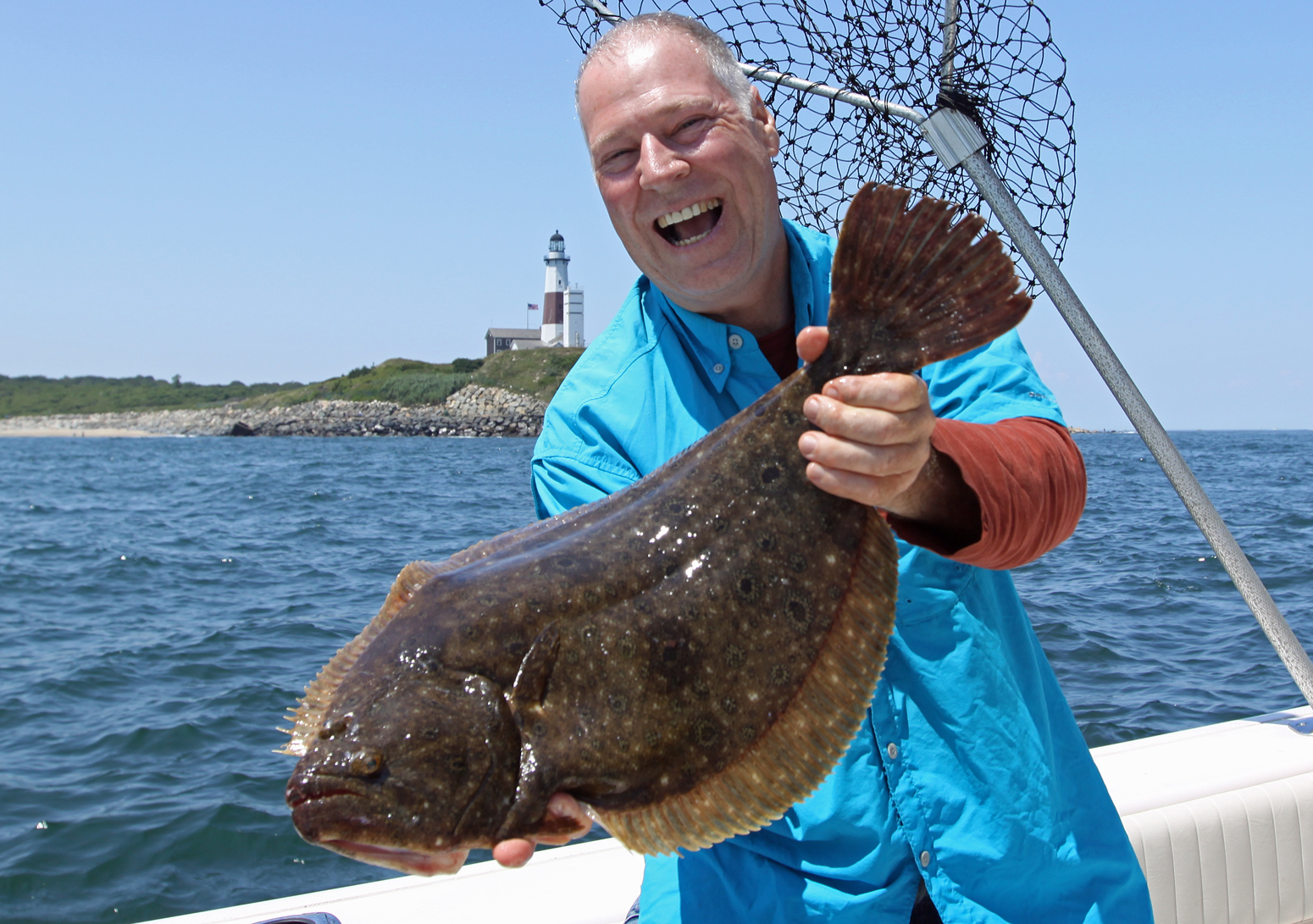 The doormat hot spots are pretty well known in most areas. Still, breaking away from the fleet – even by a few hundred yards – can pay big rewards. Here the author shows off a big summer flattie taken off Montauk without another boat in the background. OutdoorTom.com photo.

If you’ve done much fluke fishing over the years, or simply follow the reports, you already know the primary fluke hot spots in most areas. How could you miss them with the fleet all decked-out and jockeying for position around each prized buoy, channel edge or inlet.

For those new to the summer flounder game, fishing within the fleet is probably a good idea. Generally speaking, it puts you over the right kind of water and you can watch and learn as you see fish come up on boats surrounding your vessel. Once you have a feel for the right rigging, basic techniques and kind of water that produces, however, it’s often best head out on your own. That will get you a way from the competition, allow you to set up more specific drift patterns, and challenge you to figure the fish out yourself.

Simply sliding down a primary channel a few hundred yards is often enough to make a difference when it comes to fishing inside bays and harbors. Heading for the next prominent point can be a good change if working in the shadows of rocky cliffs like those found on Long Island Sound or in the vicinity of Block Island. If fishing out in the ocean, head offshore until you put another ten feet of water beneath your bow, or slide a little closer to the beach to see if the fish have moved in tight to shore. Any change is worth a try if you aren’t catching in the usual hot spots where everyone else is fishing.

Note, too, that if you headed out based on last week’s reports, the tide has probably flipped by now. When chasing reports, be sure to chase the proper tide as well, not just the location noted by successful skippers.

As a rule, during May, June and early July you’ll find the best fluke action on the start of outgoing tides as warmer water from deep inside the bays is pulled out into the main channels, inlets and harbor mouths. During the heat of summer, cooler rising waters generally trigger the bite.

SHORT AND SWEET
Many fluke fans like to drift long for the summer flounder. If they pull up a keeper every now and then, they’ll basically stay the course. One skipper a few years back told me about a great drift he experienced in the eastern reaches of Long Island Sound. “I picked a fish every 15 minutes or so,” he said proudly, “and never had to kick over the engine. I’ll bet that drift lasted more than a mile!” 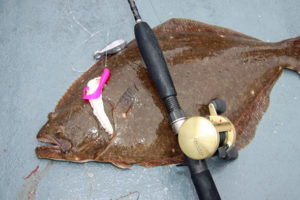 Big fluke like big baits. Don’t be afraid to fish deep even early in the season. Combining a bright white strip of fluke belly with a chartreuse, salmon or hot pink grub or Gulp! is a great way to cover all the bases. Photo by Tom Schlichter.

A mile? That’s probably three-quarters of a mile longer than I usually drift for fluke. Short and sweet is the game plan  when I’m at the helm. As a rule, the best action tends to be highly concentrated in a relatively narrow zone, often simply the stretch that lies between the buoys that mark channel edges. While it may be possible to drift and stay within a channel for quite some time if the wind is blowing in the same direction as the current, most days will see you crossing or quartering the deeper water. Under such conditions, you’ll need to keep your drifts relatively short to stay within the strike zone.

The same goes for fishing on flats, or out in the ocean. Most of the fish will be bunched up in a small stretch around favored structure, on slopes, or beneath schools of bait. Shorten up your drift to a few-hundred yards and you’ll drop your baits in consistently productive water.

How short should your fluke drift run? It’s always Captain’s choice of course, but mine are often 200 yards or less. That’s the length of two football fields. I’d rather drop my bait in the hot spot over and over again than simply drag it along hoping to cross paths with scattered summer flatties. 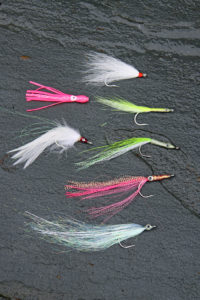 Bringing along a variety of teaser colors and sizes will give you the edge on fluke. Shortening drifts to stay in the most productive water leads to better scores as well. Photo by “Outdoor Tom” Schlichter.

TEASER AND BUCKTAIL COLORS
How do you know which teaser or bucktail color to use? That’s a tough one as fluke, like most other game fish, are capable of changing their minds not only from day to day but even from hour to hour.

I like white as a beginning choice since it routinely catches fluke in just about any water color, but chartreuse does seem to offer an edge in deep, stained or murky seas. Hot pink is another option, which seems to work especially well in the heat of late July and August at the point you begin to see baby calico crabs swimming around. Salmon was the hot color last year, although that applied more to the teaser, strip bait or Gulp used to tip bucktails than to the lures themselves. The point is that you don’t have to stick with one color all day long. If the tide changes and the water becomes murky, switch to a day-glo or florescent color. If fishing in clear water under sunny skies, try white, yellow or more natural-looking shades like olive, brown and green.

Keeping an eye on the rigs of anglers who are having the most success is another way to determine which color teaser or bucktails are working best. If a particular angler with a different color teaser or bucktail is super hot, duplicating the productive rig or color scheme is probably a good idea. It’s easy to track color productivity on an open or charter boat, although you’ll need to do a little squinting to follow the results of private vessels.

Either way, don’t wait to make the switch when you recognize a pattern. Hop on it right away before the fish have chance to change their minds.