SOUND FLUKE IN THE SUDS 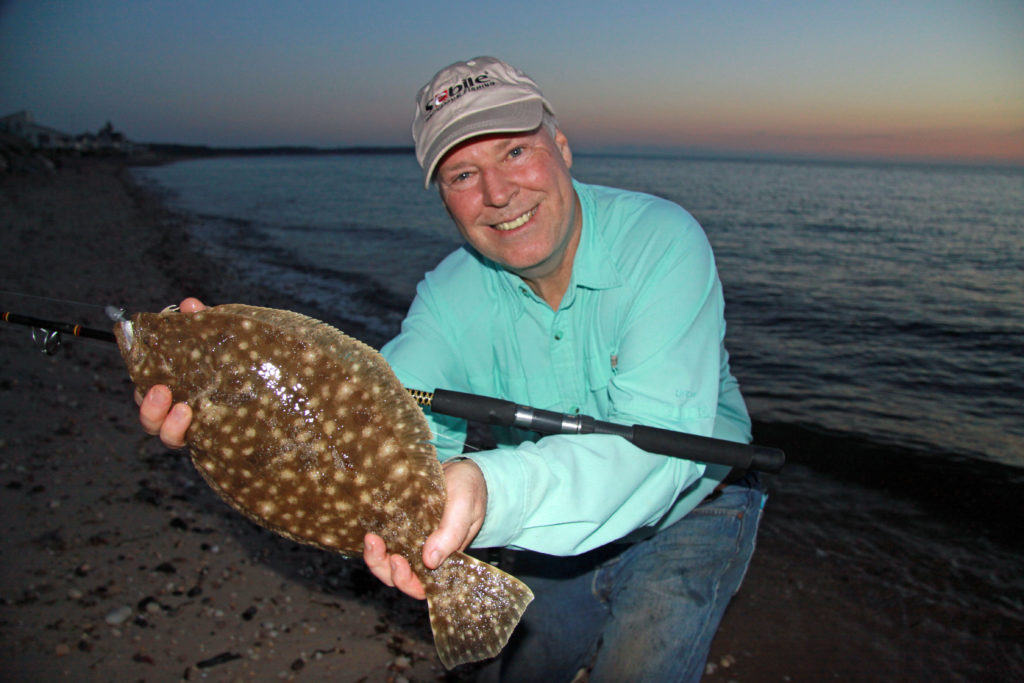 The author with a chunky short caught and released from a Long Island Sound Beach. Fluke fishing is often best in areas where gently sloping shorelines push up against more rocky areas. Photo by Ryan Schlichter.

The tap came exactly as expected. I had tossed a four-inch curly-tailed grub to the edge of a slight rip making up just yards from the beach and felt the pick-up almost instantly as the lure reached the bottom. Rather than set the hook on contact, I lowered my rod tip gently, then lifted softly to see if there was “extra” weight at the end of the line. Indeed, there was, and a quick snap of the wrist drove the jig point deep into the jaw of a 22-inch summer flattie that would be my second keeper of the morning and, soon thereafter, lunch.

That fat fluke turned out to be one of over a dozen I drilled on a morning ebb right around Independence Day a couple of summers ago. Each was taken on relatively light tackle while casting from the beach. The beauty of this shore bound fluke fishing is that it actively engages anglers, can be done on a moment’s notice and, with fluke size limits slowly approaching reasonable again, provides a shot at pulling a keeper or two from among the proliferation of shorts that hang in the shallows close to shore. It’s also a great technique for introducing youngsters and novice anglers to both the fun and intricacies of the summer flattie game.

NO NEED TO GO DEEP

While many anglers key on locating deep pockets when probing along the shore for stripers, there’s little need for this while working the Long Island Sound shoreline for fluke. Far more important is arriving as high water is just beginning to retreat for this stage of the tide sucks small minnows, sand fleas, grass shrimp and plenty of other fodder that the toothy flatfish enjoy from the shoreline’s edge and ushers them along the gentle slopes beyond the curl of the waves. It is on these slopes that near-shore fluke stack up, facing into the receding and sweeping current as the dinner bell begins to ring. 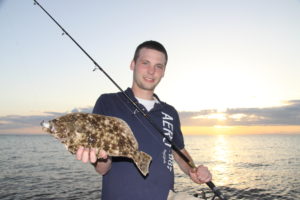 Since you’ll be using light tackle and lightweight lures, a gently sloping stretch along a sandy beach is perfect to ply this trade. In fact, all you really need to make this technique work, aside from some agreeable toothed flatties, is four- to eight-foot depths with a light current and calm winds. Deep water and strong currents just make it hard to feel bottom – and strikes – properly with the eight- to 12-pound test spinning outfits that will help you excel at this game.

Where to find the right kind of water? Think in terms of gently sloping beaches or sandy shores that boarder rockier stretches such as the down-tide side of a prominent point or a couple hundred yards down the shoe from a harbor mouth. Of course, the Long Island Sound shoreline being as private as it is on both the New York and Connecticut sides, you’ll need to make sure you’ve got the proper access permits to fish in village or town park waters (or you might choose to pay a day fee for entry into some beach areas.)

Because you’ll be doing a lot of casting, a spinning outfit makes the most sense for this approach. An 8- to 14-pound test outfit with a six-and-a-half to seven-foot medium-fast action rod works very well in most situations, although I’ll drop down to as little as six-pound test in some areas where cut-offs seem unlikely. Since there is little need to go deep, and snagging bottom is always a possibility along most stretches of Long Island Sound real estate, I favor mono lines over braid for this approach. I actually like having a little stretch in the line as I tighten up before setting the hook – and it’s a lot less trying on the wallet to break off a length of mono as opposed to braid. At the terminal end, tie a 90-lb. barrel swivel to a 4-foot length of 20-lb. test mono or Seaguar fluorocarbon leader before attaching a bucktail or the jig head of your choice directly to the leader.

As a rule when targeting Sound fluke from shore I fish a lightweight bucktail rig. My favorite choice is a 4- or 5-inch white, pink or chartreuse curly tailed grub or sand eel imitation on a ½ to 5/8-ounce white, chartreuse or unfinished round jig head. On purpose, I usually, I miss-match the color of the head with the body. Spro bucktails are another good choice and, for working water that is a little deeper or where currents are somewhat stronger, a ¾- to 1-ounce fluke bullet works just fine. Each of these I’ll tip with a single spearing, 4- to five-inch strip of squid or thin strip of sea robin. I like adding the scent and feel of real meat to my offerings, but you can catch on these rigs with no additions, especially if you substitute a Berkeley Gulp! Swimming Mullet for the grub or sand eel imitation. The Gulp! is indeed amazing when it comes to turning on the fluke but in these shallow waters it also catches a ton of sea robins and invading snappers can make short work of the tails once they arrive in mid-July. 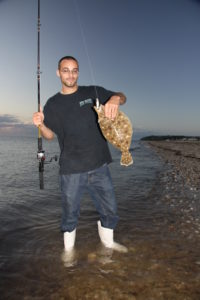 John Mazzafaro is about to release this Long Island Sound fluke which struck just before the sun went down. Photo by Tom Schlichter.

It might seem logical to cast as far off the shore as possible when standing on the beach but that’s not always the best idea when targeting fluke from shore. The currents of Long Island Sound have a pronounced west to east sweep in many areas as the tide begins to retreat. This sweep draws small baitfish and other tasty fluke delights over the lip that borders the shore, then down along the beach. To take advantage of this natural chum slick, and to add a little extra wiggle to your lure’s action by drawing it against the current, cast down tide and at a 30- to 60-degree angle from the shore. This should keep your lure in the strike zone, tight to the bottom and moving enticingly, for the greatest amount of time on each cast.

Retrieves with this shore-bound jigging technique should be painstakingly slow and methodic. Cast out, allow your lure to settle to the bottom on a loose line, then hop it back in short, four- to six-inch increments. Hop the jig three to five times, let it set for three or four seconds, then repeat. This retrieve covers the bottom thoroughly while providing any tentative fluke following the lure an opportunity to pounce.

If you hook a fat summer flattie, or even miss a strike, cast back to the same spot several times before directing future casts a few degrees in either direction as fluke often line up parallel to the beach and several can be taken with nearly identical casts. I’ve drilled as many as a dozen summer flatties weighing up to 5 pounds by repeating a single cast again and again for over the course of an hour or so.

THE BITE IS NOW

Long Island Sound fluke can be taken from shore right through the summer, although June and early July are prime time. To be certain, you’ll catch and release a ton of shorts for every fish you get to take home using this approach, but the action can be fast and furious, the chance for a keeper is always present and, when the water gets warm, you can simply enjoy some time at the beach as you wait for the tide to turn. It is, in short, both fun and productive fishing.