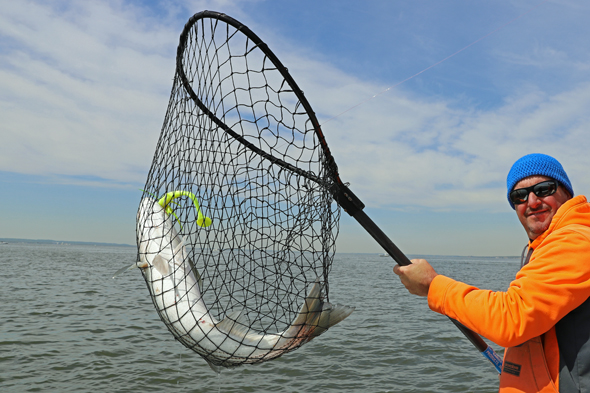 Depending on where you fish, striped bass may be known as stripers, rockfish, squidhounds or greenheads. Large ones are usually called cows. Mate Bob Hindenlang lifts this nice one aboard the charter boat No Time, Oceanside, NY. Photo by Tom Schlichter.

“What’s in a name? That which we call a rose / By any other word would smell as sweet.”
– William Shakespeare, Romeo and Juliet

Shakespeare may have been right about naming flowers, but fish? Would a bunker by any other name smell the same? Well now, there’s a question to ponder. When it comes to piscatorial personification, recognition and classification, I think there may be more to names than Shakespeare opined.

Although fish names tend to be fairly descriptive, they can also be misleading. The person who came up with the original moniker likely focused on the fish’s most notable characteristic, but then not everyone sees things the same way. Thus, my bulldog blackfish might be a white chin to you.

Many fish have several names, so it’s a very good thing that scientists give every fish a Latin name. This was supposed to eliminate confusion. But most fishermen ignore the Latin and use common names, which, among other things, makes for better fish stories. 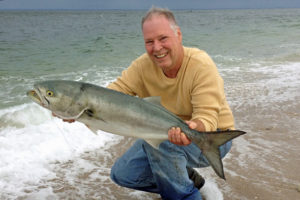 Whether you call it a chopper, ‘gator or gorilla-gator, big bluefish are tough battlers that generate a lot of smiles. OutdoorTom.com photo.

Consider the bluefish, named Pomatomus saltatrix in 1766. The common name couldn’t be any more obvious or direct — unless, of course, you caught a big blue one sunny afternoon, held it aloft to admire, and realized that under certain sunlight conditions it is really a green fish. Hold the same fish aloft at dawn, and it might be purple.

In the U.S. alone, bluefish have a dozen or so nicknames, including chopper, snapper, gator and cocktail blue. Teeth size – and how voraciously a fish uses them – is one trait that stands out in the bluefish name game. Juvenile blues (12 inches or less) are known as snapper blues. Adult blues weighing in at up to 10 pounds are called choppers, and fish that weigh between 10 and 15 pounds are “gators.” In a nod to both the size of the fish and its dentures, fish that are 16 pounds or larger are known as gorilla-gators. Calling any of these monsters plain old blues won’t cause a furrowed brow on a nearby fisherman, but the additional moniker makes for a more colorful sea story.

A word of caution, however, if you happen to be blue fishing overseas: You’ll have to choose your names carefully. You’ll be pursuing anchova in Portugal, choppers in Australia, elf in South Africa, and fatbacks or snapping mackerel, in Guyana. 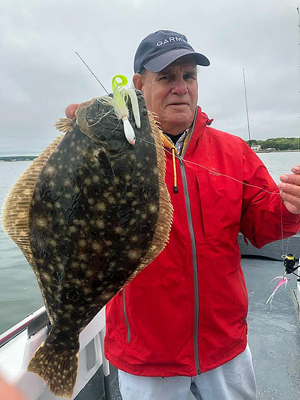 Fluke are called summer flounder down south. Larger ones are termed “doormats.” This one swallowed a Spro bucktail. Photo courtesy of Shinnecock Star, Hampton Bays, NY.

Winter flounder, Pseudopleuronectes americanus, is another species with quite a roll call. Here in the states, winter flounder are also known as blackbacks, bluebacks and mud dabs, a nod to their preference for muddy bottoms. They range in color from reddish-brown to dark slate, and have a thicker body and wider spaced eyes than summer flounder.

The summer flounder, Paralichthys dentatus, is member of the large-toothed flounder family, and this fish prefers hard sandy bottoms. It looks similar to the winter flounder but has eyes that are closer together, and its mouth is equipped with well-developed teeth. Most fishermen in the Northeast call them fluke.

Both fluke and winter flounder are caught in a variety of sizes, which adds another spin to their names. Lunker fluke are know as “doormats” while a hefty “snowshoe” flounder weights three pounds or more. Blackbacks, keepers and flatties are mostly legal-size winter flounder, but the term “short” depicts any fish under the current legal size limit.

Big flatties that don’t quite measure up to snowshoe status are called yellowtails, but they are not to be confused with yellowtail flounder, Limanda ferruginea, which prefer deeper waters offshore and do, in fact, have a yellow tail. That other flattie favorite, sole, as in filet of, actually lives on the other side of the Atlantic off the European coast. So, if you spot fillet of sole offered as the catch of the day in a local restaurant, you might want to seek further explanation.

Most Northeast anglers find that chasing Morone saxatilis can consume their entire summer. If you live north of New Jersey, you call them striped bass. If you live south of New Jersey, particularly on Chesapeake Bay, you call them rockfish. Given the fact that most striped bass have seven stripes on each side, they appear aptly named. They also love rocky habitats, however, so the name rockfIsh seems to make sense, too. Some fishermen also call them linesiders, stripers, squidhounds and greenheads. Bass weighing more than 30 pounds are called cows, which is understandable when you consider their appearance and the fact that they are almost always female. Male stripers rarely exceed 20 pounds. 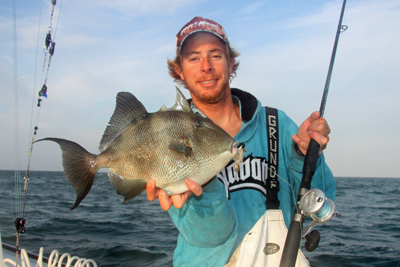 Triggerfish get their name from a front dorsal fin ray they can raise and lock in place almost instantly. It’s one reason these tasty delights are often lost in bottom structure. This one was caught aboard the Montauk, NY charter vessel Bluefin IV. Photo by Tom Schlichter.

A few fish names are sharp and to the point. Witness swordfish, needlefish and “billfish” – the generic name for all fish big and pointy. By contrast, other names have hidden meanings. The triggerfish is so called because it can lock its lead dorsal fin straight up in the span of a millisecond. When a triggerfish takes your bait, it dives into a rocky haunt and triggers this fin to wedge itself in some underwater, snag-infested lair. Try as you might, you can’t budge that fish once the trigger has been pulled – but you can slacken your line to fool the fish while you wait for it to release the trigger and swim free of the snag.

Some fish names are accurate, but not as evocative as they might be. Bonefish is self-explanatory, but “quick fish” might be more to the point. Bigeye tuna is fair, but “back-breaking” tuna might be better – as any angler who has battled one of these bruisers would attest. Sailfish is cool, but these fish may be better suited to the name “crazy neon jumping fish.” That would leave no doubt as to the maniac at the end of your line.

The name weakfish pays homage to the soft mouth tissue of this species, which allows the hook to tear free when an angler exerts too much pressure. It has nothing to do with the ability of these trout look-a-likes to peel drag from an angler’s reel. Larger weaks, Cynoscion regalis, are often called yellowfins, bastard trout, gray trout, sea trout, squeteague or squit. Full grown weaks love to follow flooding tides up onto the flats and receding tides back to the channels, hence the name tiderunners. School weaks and bay weaks are simply weakfish of four pounds or less. They have a tendency to group tightly and to invade shallow waters. Larger weaks seem to travel in pods of just a few fish, as opposed to large schools.

Many other fish names strike me as not quite right. Whiting are silver, red hake are brown, big groupers are loners, permit require no special license, and wolf fish look like toads. A roosterfish sounds like something you give away to a farmer living across town, and halibut was obviously intended to be the butt of fishing jokes for all eternity. As for wahoo, this name describes the sound made by an angler setting the hook, not the fish powering away from the boat.

Only in the fish world could a “hump- backed” porgy be a trophy, a bulldog be a large female blackfish, or “doormat” depict one of the most prized sport and food fish found along the East Coast. Big fluke, also known as summer flounder, may look like doormats, but they fight like bull dozers and taste fantastic. I would never consider wiping my feet on such a prize.

I have other questions. I wonder, for instance, if anglerfish sense any irony when they feel a hook. Then there is the tilefish. It is perfectly named, for this bottom dweller lives in loose schools in 300 feet or more of water. Each fish inhabits a burrow or depression, with the school blanketing large sections of sea floor. I don’t know where this name comes from, but it dates back at least to the Pilgrims, long before divers went to the bottom of the sea. I wonder who could have envisioned that these deep-water denizens formed such a pattern on the ocean floor.

So which is it, porgy, scup, slab, pork chop or jumbo? Bunker, mossbunker, menhaden or pogy? Blackfish, tautog, ‘tog, or oyster cracker? Mahi mahi, dorado or dolphin? Little tunny or false albacore? It seems that the bottom line is, what you call a fish depends on where you live, the names you heard growing up, and whatever sounds best to you.

It’s said that beauty is in the eye of the beholder. This, I think, rings more true than Shakespeare’s words on names when it comes to fishing. As for me, I don’t really care what you call my catch as long as you shout, “That’s a beauty!” when I hold it up for a picture.