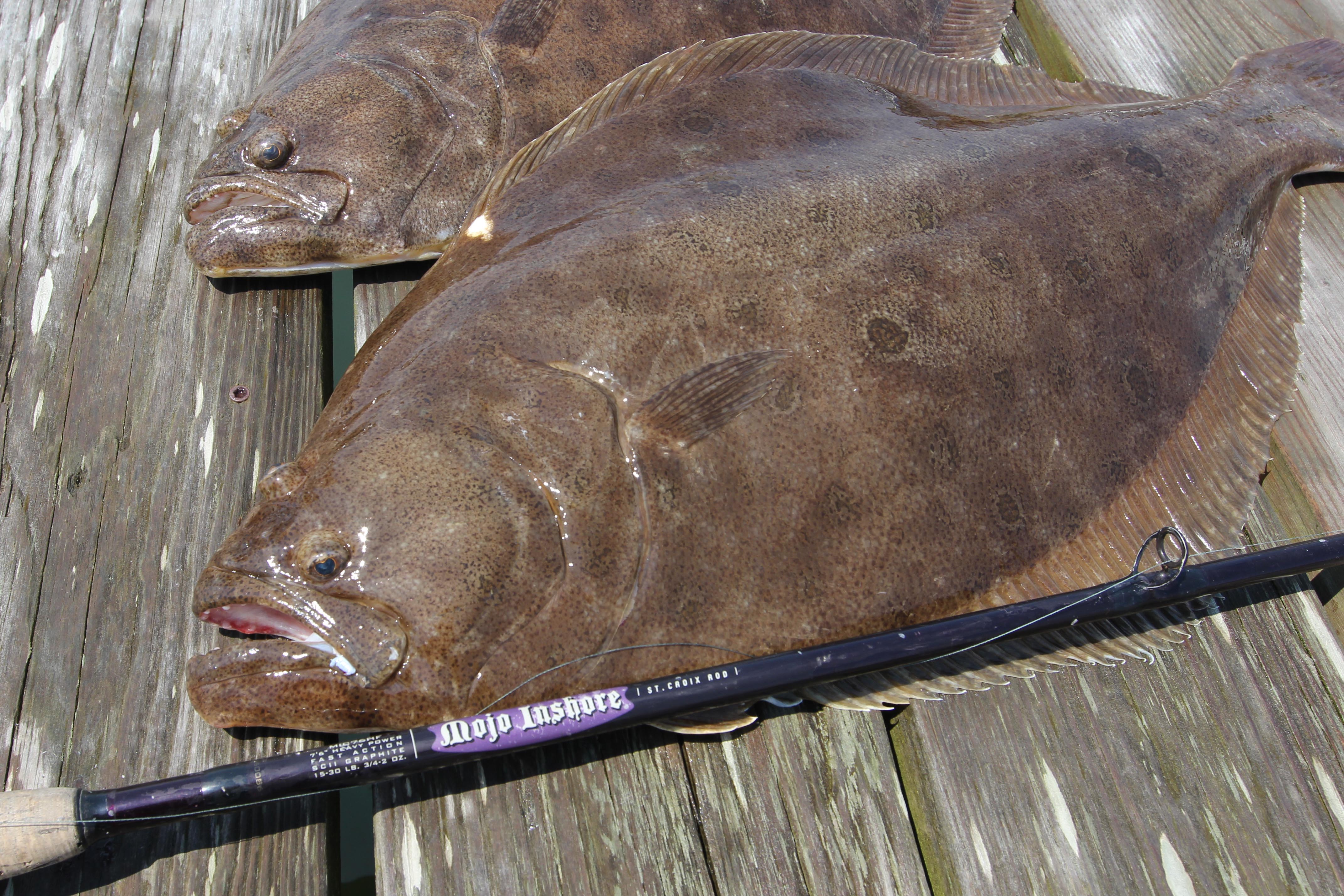 Big fluke are on the menu for those who dig deep during August and September. This brace of 9-pounders was taken aboard the Montauk, NY charter vessel  Krystyna Maria Fishing – Montauk with Capt. with Capt. Marco DeStefano. Photo by Tom Schlichter.

It’s amazing how fast the summer goes here in the Northeast. As August advances toward September, the first hints of fall can already be felt in the night air. While that brings a certain degree of distress to sun worshipers, it also signals anglers that the time to connect with a monster fluke is at hand as a ton of doormats have been taken from our waters in during late August and September in recent years. 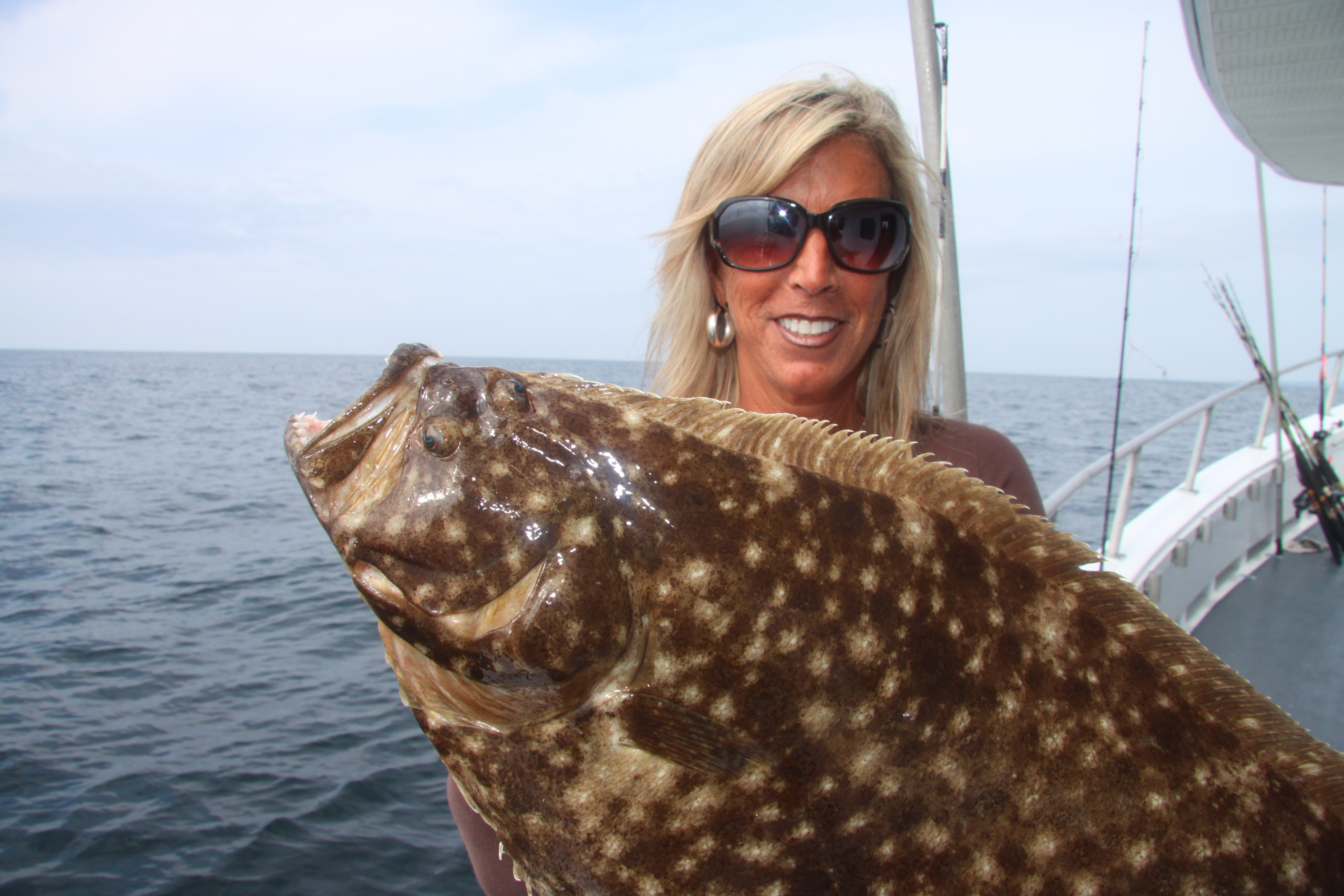 August sees some super late-summer fluke action, especially at Montauk, Ambrose Channel and off of Block Island. This August doormat was caught aboard the open boat Miss Montauk. Photo by Tom Schlichter.

One key to hooking-up with late summer flatties that fall in the “no doubt” class is to concentrate your efforts in deep water. You’ll find them in well-defined channels leading toward inlets and harbor mouths and in the open ocean from half a mile to three miles or more off the beach.

To be sure, this deep water probing isn’t a light tackle, fast action affair. In fact, it’s quite the opposite. Bring along your favorite conventional setup for pulling porgies and sea bass off ocean wrecks, or that same rod and reel you like to use when clam-chumming in strong currents under channel bridges. Leave your ten- to 14-pound test spinning gear in the rod rack because it’s not sturdy enough to handle the weights and big baits you should be using to target these brutes. I like to use a 20-pound class outfit but many anglers bump it up another notch to 30-pound test. If fishing with braid, 50- to 60-pound test with a long, 30-pound test mono or fluorocarbon leader is about right.

Typically, rigging for this action consists of a standard bottom rig featuring a 3/0 to 5/0 wide gap or Sproat style hook. The hook should be tied into a four- to five-foot length of 30- to 40-pound test leader via a dropper loop positioned two to six inches above the sinker. Many anglers add a teaser about a foot above the bottom hook. To be sure, this is nothing more than the standard inshore rig for fluke, except that the hook size is larger and your sinker will run heavier. Expect to need 4 to 6 ounces of lead to hold bottom in most inlet, bay and sound cuts or channels, and 6 to 10 ounces of lead in ocean waters that may run 70 to 110 feet deep. If  you are comfortable with deep-water jigging, you might eliminate the sinker and substitute a 3- to 6-ounce bucktail for the lower hook. 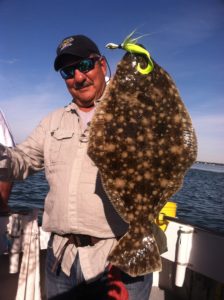 While gear this heavy may seem like overkill for fluking, keep in mind that you’ll be using big baits, heavy sinkers and dealing with fish that may reach doormat proportions. Fluke of 8 to 12 pounds are always a possibility when you fish big baits in deep water at this time of the year, and 3- to 6-pounders are relatively common. Summer flatties this size can put up a commendable tussle even when tugging against such heavy sticks.

For early- and mid-summer fluking inside the bays, sand eels, spearing and live killies make excellent baits. But for late summer doormats you’ll need to switch to something bigger. Trade in those tiny baits for large smelt, 6- to 8-inch fish or squid strips, a live 6-inch snapper blue or a fresh-dead peanut bunker.  These bigger baits present a more wholesome looking meal than does a simple spearing. They offer a doormat something to get excited about, a meal worth chasing. Better still, they discourage smaller fish from biting which gives the big girls a better chance at getting to your bait. If you choose to go the live bait route, you’ll find a slip-sinker rig works well. Hook the live bait through the nostrils or through the lips. A 20-foot drop-back when a hit is felt should allow the predator to ingest your offering deep enough to ensure a solid hook-up. 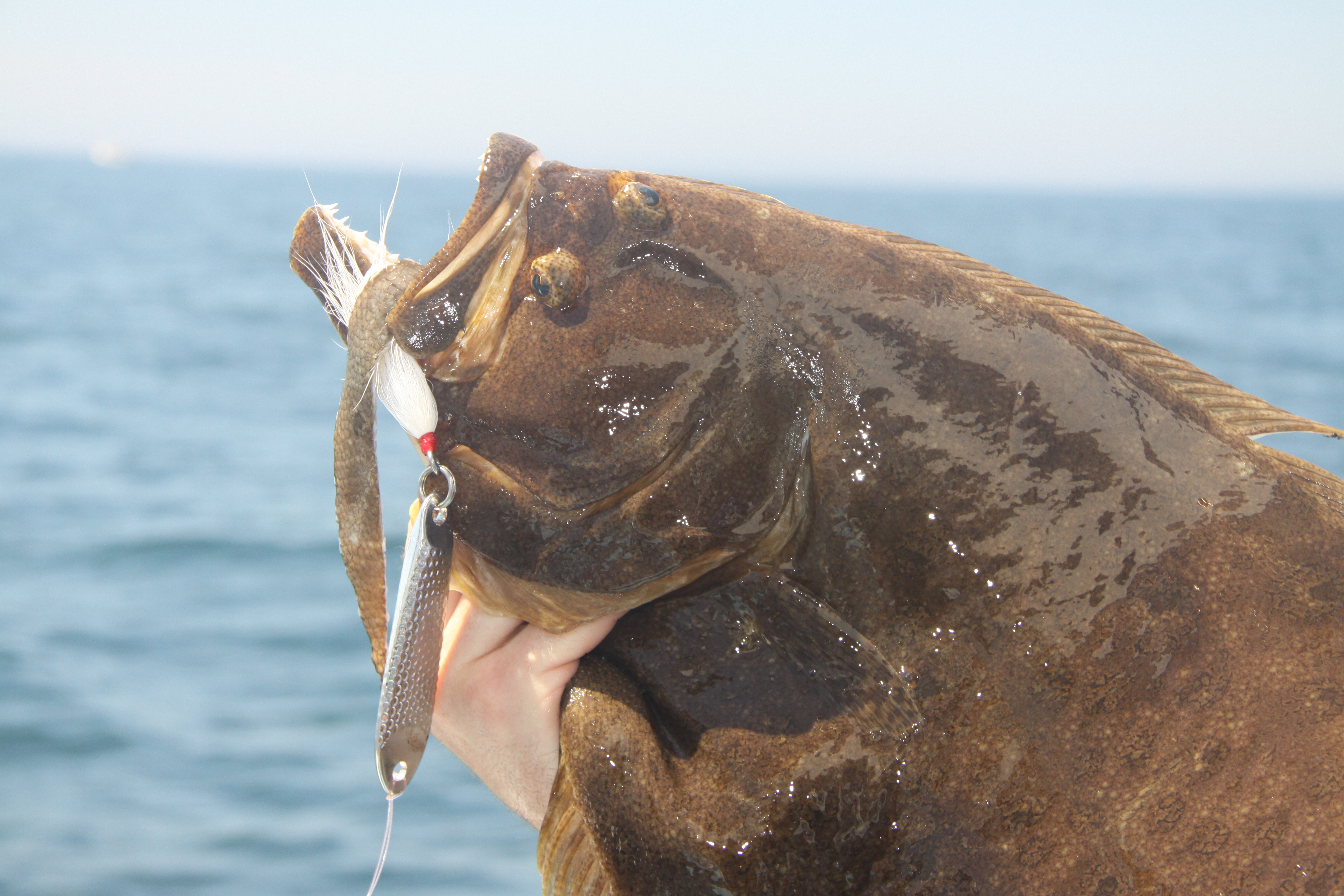 August fluke like a full meal. This one fell for a long fish strip impaled on a hammered tin worked slowly across the bottom. Photo by Tom Schlichter.

There are several big fish hot spots that are worth the ride if  late-summer doormats are on your hit list: Ambrose Channel, right out in front of New York City is one. This run gets started in mid-to late August and continues right through the end of the season. Catches are best here along the channel edges, as you might expect. The Cholera Banks area, west of Long Island’s Jones Inlet,  is another late season hot spot. Then there is Montauk. Here the action centers on the south side between Montauk Village and the Castle area east of Shinnecock Inlet.

Yet another spot of note is the extreme western end of Long Island Sound. Some very large fluke are culled from the waters around the Throgs Neck and Whitestone Bridges most years. As at Ambrose, the Sound fish have come mostly from ledges and channel edges. Block Island is worth the ride, too, especially in late-August as the fish there seem to bunch up a bit as the first kinks in summer’s armor make themselves known in the form of refreshingly cool evening temperatures.

Of course, these aren’t the only hot spots. Virtually any near shore ocean or Long Island Sound wreck, artificial reef, inlet mouth or major,  channel can sport double-digit doormats as the summer winds down. If you can’t get to Ambrose, Montauk or Block Island, simply work your favorite deep-water blackfish, sea bass or porgy wreck, the edge of a mussel bed, or ocean hump. Choose big baits that sea bass and scup will ignore, and drift along the outer edge of structure.

Pick your days carefully when planning an ocean fluke trip. You’ll want to head out when conditions are conducive to good drifting. Avoid new and full moon tides as they result in too much current, and hope for wind speeds of less than 15 knots. The combination of strong winds and moon tides can make for tough fishing, so keep an ear to the weather report and plan accordingly.