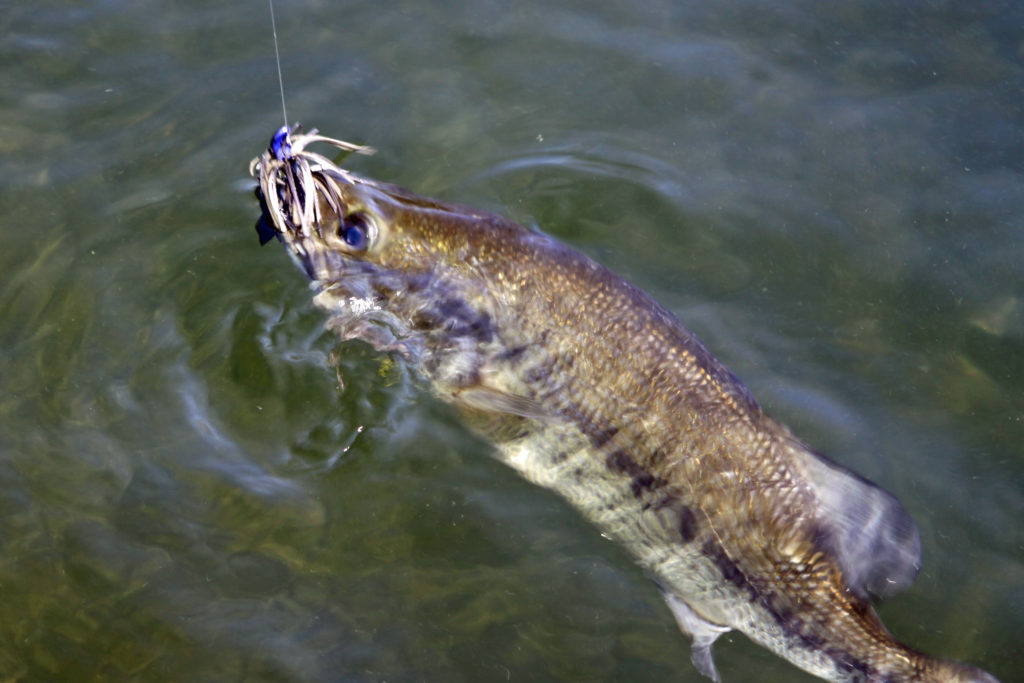 Moving off the shore to fish more open water is one way to connect with big fall bass. This one ate a swim jig over a seamless bottom.  Photo by Tom Schlichter.

During the heat of summer, most Northeast freshwater anglers stick to tried and true patterns. Through July, August and even early September, deep water is the rule in larger lakes and reservoirs while the shade under overhanging trees, brush, thick weed mats and floating docks holds the gold for prospectors on shallow, dishpan ponds.

While these patterns may still be effective true through Labor Day, they tend to loose productivity soon after. That’s because shorter days, the lower angle of the sun and more accommodating temperatures begin to open additional water for predatory exploration. Add in less oxygen being given off by fading aquatic plants and it’s no wonder the fish begin to wander from their summer lairs.

Quite frankly, early fall prospecting can be frustrating if you stick to your summer guns. Sure, you’ll continue to pull a few fish from structure points, deadfalls and lily edges, but as the waters cool, weeds retreat and zooplankton fades, everything from sunfish to bass and pickerel seem to grow just a little more cautious. The way to counteract this piscatorial shyness is to forget most of what you know about summertime fishing and go back to the basics that helped you find the action as a novice.

With a summer’s worth of pattern fishing under your belt, the temptation is to head right to the place where you caught the last time out. Whether it’s a downed tree, sloping point or large boulder in a few feet of water, most sweetwater fans will plow straight ahead until reaching their most recent hot spot. The problem is, with early fall shuffling the environmental card deck, the factors that attract and hold various species of fish can change significantly from week to week – or even overnight. That means you can toss last month’s patterns in the trash because you’ll likely need to start over. In doing so, make it a point to not pass up the obvious. 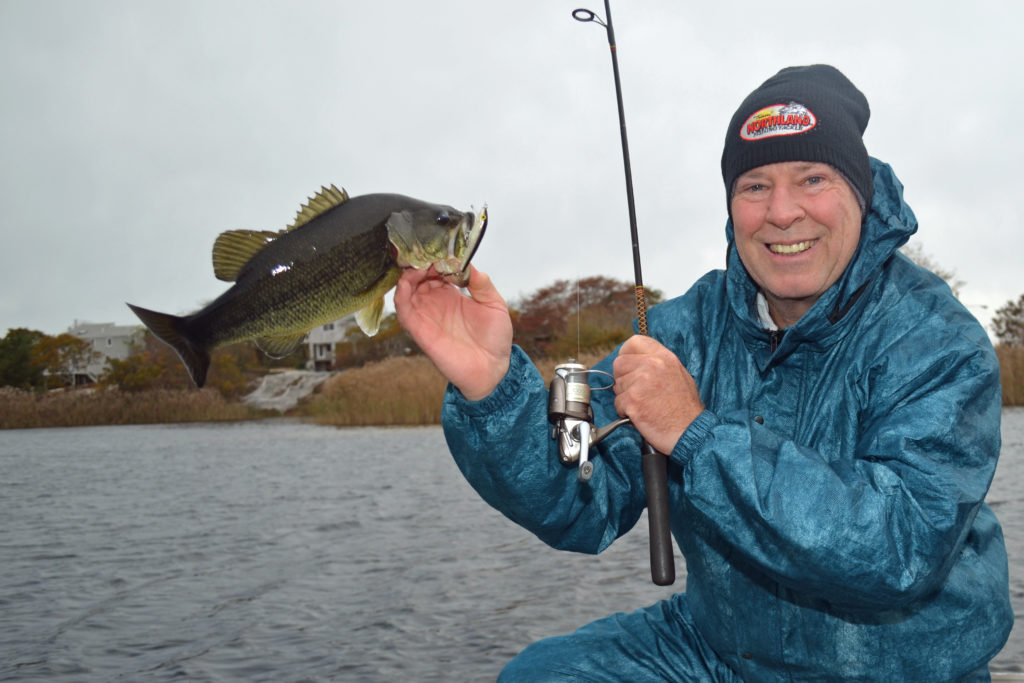 Moving out from the shore and working open water with small spinners or Rapala Floating Minnows is one way to increase your early fall freshwater success. OutdoorTom.com photo.

A dimple on the surface, small wakes moving out as your boat departs the launch ramp, the sound of a sunfish kissing the surface; these are all signs of life and nothing to ignore as you get underway. Priority number one at this time of year should be simply finding out where the fish are bunched and these, as well as an occasional surface eruption, puff of mud beneath your bow or tiny whirlpool swirls at the edge of a flat, are tell-tale signs that fish are around. In the heat of summer when you know the big ones are buried in the slop, it’s okay to push past such tip-offs to pound the shoreline or target an area that has been holding lunkers for weeks. Now, however, you’ve got to play by house rules with bass, pickerel, trout and panfish seemingly dealing from both sides of the deck.

It seems to me that one of the hardest things for early fall anglers to do is to try new water – but that’s often the secret to uncovering the best bite now. As the weeds continue to brown, you’ll find both panfish and larger predators prowling more open waters, especially along channel edges, the mouth separating a cove from the main pond, or any deep pool at near an inflow or outflow. You’ll also find them out in the open, especially at mid-morning and late afternoon, so don’t be shy about taking a few casts right out in the middle of the lake – water depth be damned.

When it comes to working the weeds, I do have three patterns that continue to produce regularly well into October. The first is to work any remaining isolated green mats no matter how small. Three lily leaves or a two-foot wide surface spread in otherwise uncluttered water is all that’s needed to hold a couple of bass, pickerel and panfish. Another pattern worth investigating is fully submerged weed or grass beds that have three or four feet of water above them. These seem to hold well at midday. My third early fall weed pattern is to work the outside edges of weed mats that produced along their inside edges back in July and August. A Carolina-rigged worm, square-lipped crankbait, light swimming jig or small spinnerbait retrieved parallel to these areas is all you need to connect. 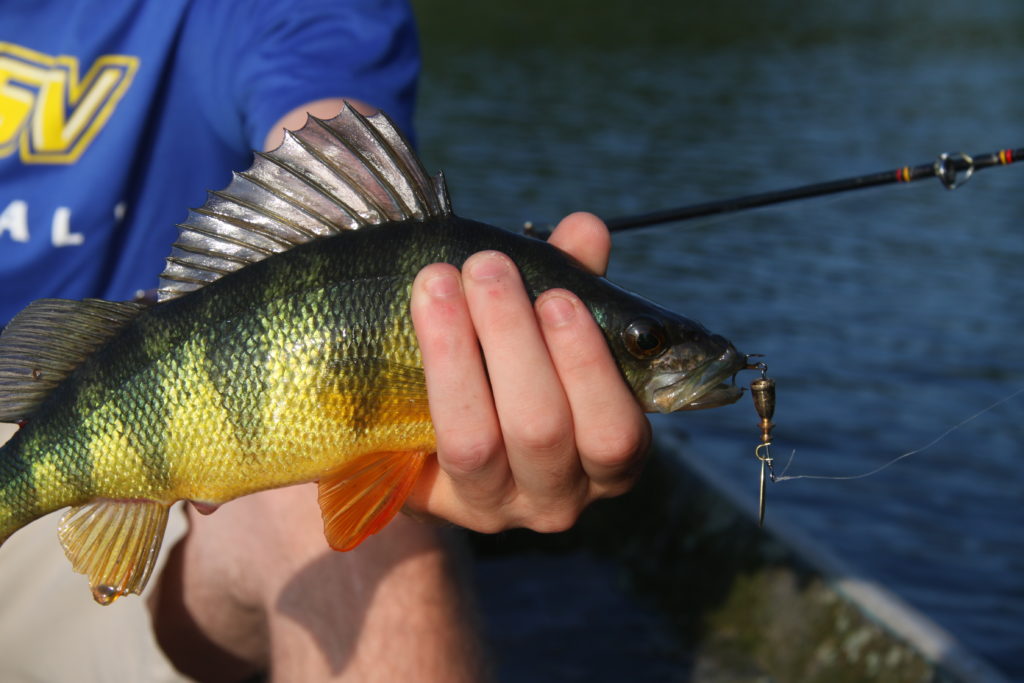 Tossing in-line spinners is a great way for search our open water panfish. They catch a surprising number of bass as well. Photo By Tom Schlichter.

In terms of fishing more open areas, the slope of a flat fading into deeper water is a great choice right now, as are the edges preceding any significant drop off. In these areas I like to roll bigger spinnerbaits just above the bottom in search of a single large big bass or pickerel. At the opposite end of the spectrum, it’s hard to beat a Panther Martin gold spinner, Mepps Black Fury or Blue Fox Super Vibrax worked just below the surface when it comes to uncovering big yellow perch or crappie hideouts while blind casting on the drift. Another great lure for covering open water is a Rapala Floating Minnow. Both spinners and small plugs can be worked quickly, allowing you to probe a lot of area in a short amount of time.

One last point to keep in this fall is that the surface bite isn’t necessarily over. I’ve raised big bass throughout October and even into early November – but the later into the season, the further from the shore you need to work. Because I’m fishing in mostly clear, unobstructed water at this point, I tend to downsize my lures – even my surface poppers. I’ll opt for a small Jitterbug, Rebel Pop-R or Crazy Crawler to find the action, then bump up to a larger size if I get a good response. The smaller sizes I’ll often throw on 4- or 6-pound test line. If I start hitting some bigger fish, however, I’ll reach for my 8-pound test spinning outfit. If the action is really good, I might even use the long wand to toss some bass bugs.

I tend to put a lot of effort into early fall prospecting from a sweetwater perspective. Part of that is because I know there is potential for some great action in open water, and part is because I’ve had good success catching big fish on small lures during this time period. The other reason I get out a lot this time of year is that mid-October sees the fall run get underway on the salty side with blackfish, stripers, blues and false albacore all vying for my attention. No doubt I’ll seriously cut them into my line-up soon but, for right now, it’s yet another round of bass, pickerel and panfish that I crave.