HIT THE SURF FOR FAT ALBERT 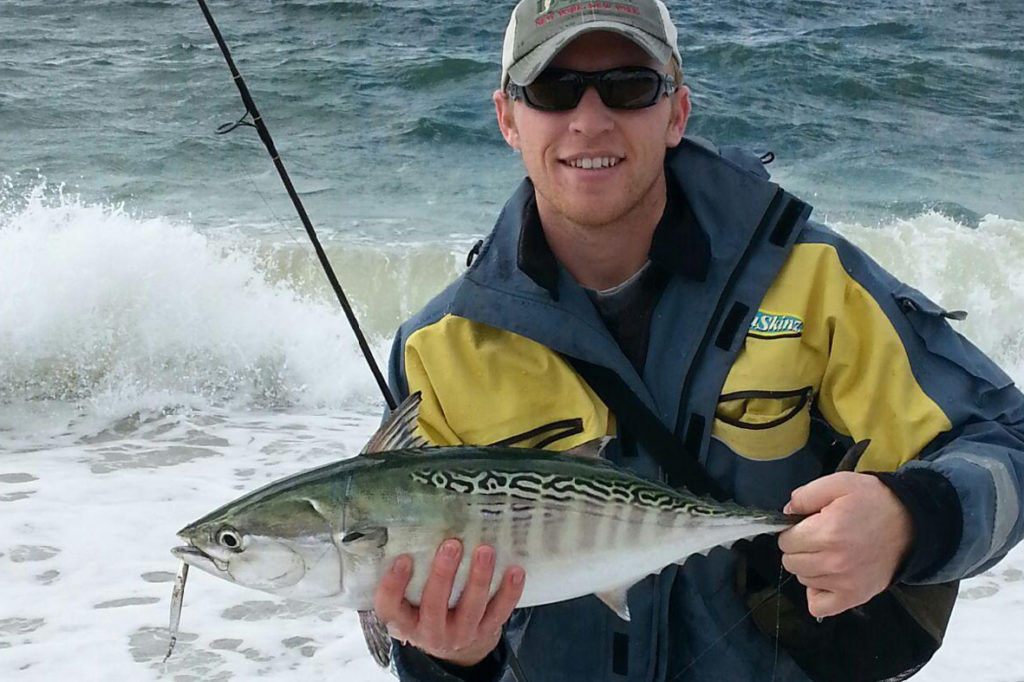 While Fat Albert often prefers calm waters, he’s no stranger to the ocean surf. Capt. Scott Worth of North Fork Light Tackle Charters tossed a tin for this chunky albie. Photo courtesy of Scott Worth.

Fast, powerful and exceptionally smart, false albacore are one gamefish species that can really light a fire under northeast anglers. Pursued by boat, they are a tough fish to out-whit and out-battle. Hooking one in the surf is even more of a challenge.

Being generally elusive, false albacore can remain on the wish list for surf anglers for quite some time. It took me two years of trying to catch my first one some 35 years ago. It seemed that just about every time I went looking for the green and sliver torpedoes, I arrived a few minutes late or left just before they put in an appearance. To call the game frustrating would be an understatement.

Eventually, like most serious surf casters, I picked a beach where they were frequently encountered and staked it out for several days until they came through. One strike and a line-burning run was all it took to convince me the wait had been worthwhile. Call them albies, little tunny or Fat Alberts, if you like, it all translates into a whole lot of fun and excitement.
YOU’VE GOT TO SCOUT
False albacore, stripers and bluefish often churn the same waters but you can tell the three apart with a discerning eye. The choppers simply tear-up the surface with large crashes that seem to have little in the way of a predictable pattern. The stripers generally seem more measured in their attacks with the schools holding form slighter tighter than the blues. Albies, by comparison, appear to always be pushing forward in sharp pods at breakneck pace. Another tip-off is that fewer terns and seagulls dive on the albie schools when compared to maurading blues. That’s because bluefish slash their prey but Fat Alberts simply swallow them whole, leaving little behind for the birds to get excited about. Watch carefully and you’ll also notice the deeper, football-like shape of the albies as they porpoise on schools of spearing, sand eels or various rain bait species. 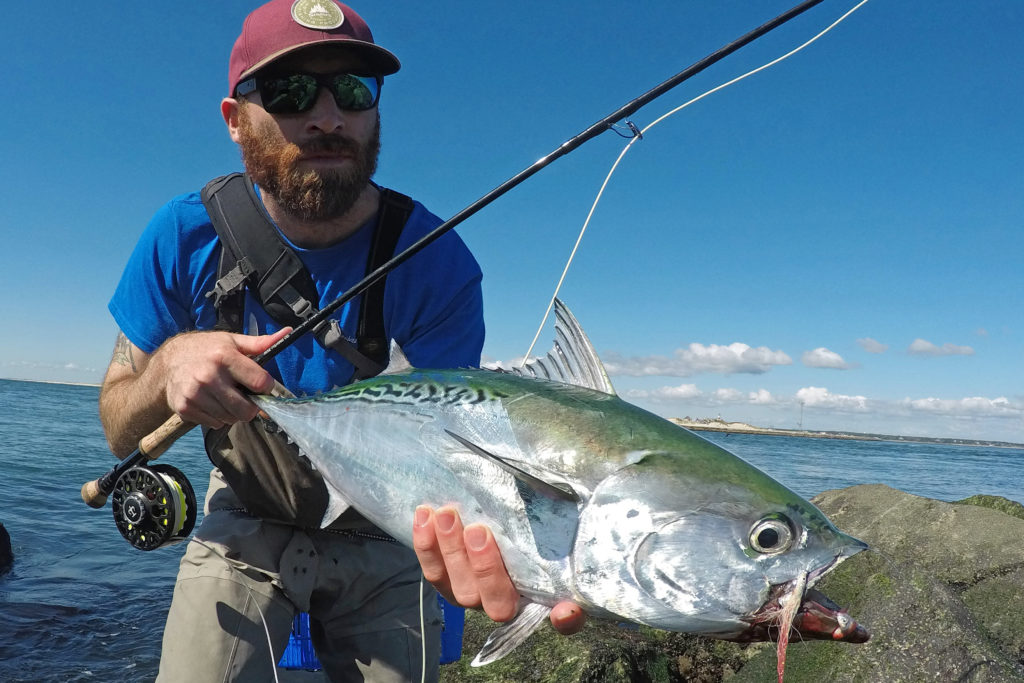 False albacore often show up around inlet jetties. Jeff Lomonaco of White Water Marine Outiftters in Hampton Bays, NY drilled this one on the fly.

Although these relatively small members of the tuna family will cover plenty of sea in their endless pursuit of baitfish, surfcasters are probably best off staking them out at known hot spots and keeping an extra rod rigged specifically for such encounters that can be grabbed at a moment’s notice. Such is the false albacore game that you often get only a few casts in before the school slides through. Taking the time to switch lures almost guarantees you’ll miss the peak of the action.

Concentrate your efforts around beaches immediately adjacent to an inlet, harbor mouth or breakwall where these speedy predators are routinely drawn tight to the beach. Cove areas also allow for up close and personal encounters with false albacore as they chase pods of terrified baitfish along the shore until pocketed in the quiet backwaters of bends and curves. In fact, one way to head off false albacore at the pass is to look down the beach and scan for the nearest cove or point. That is where the action is most likely to end up before the albies simply vanish quietly back into the depths.

GET SMALL
Considering false albacore can top out at 15 pounds or so in our waters, they show a propensity to smack relatively small offerings and novice albie casters are often rejected because the lures they present are too big to entice these finicky feeders. Keep your offerings both lightweight and slender and you’ll find these fish can be pretty receptive. An Ava 007 tubeless diamond jig, Deadly Dick, Hogy Epoxy Jig or, my personal favoite – a Panther Martin 1-oz. BigFin™ 3-in-1 Paddle Tail Weedless Swimbait in white/red – are all good selections. Fly-rodders should opt for white or silver crease flies, silver, white or olive epoxy minnows, or sparsely tied minnow patterns measuring three to four inches in length that feature a splash of silver Mylar or Flashabou. Whether you toss tins, soft-plastics or flies, be sure to retrieve them quickly and always cast toward where the schools are headed, not where they are coming from. 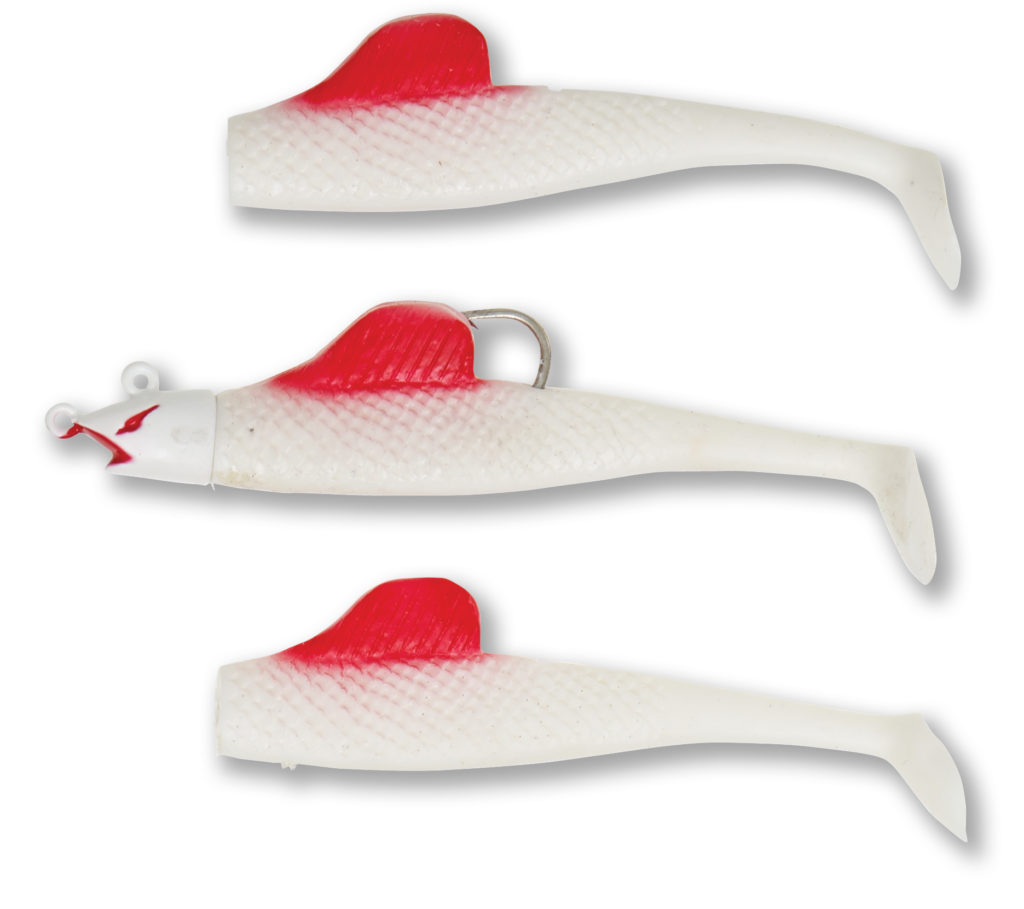 PARTING SHOTS
If you are lucky enough to draw a smack as an albie school passes through, hold on tight because these fish can really motor. Allow them to take drag and tire a bit on their initial runs before putting a little more backbone into the battle. Making sure your drag is set at approximately one-third the breaking strength of your line before ever sending out a cast is a good idea.

When albies strike, they blast off with amazing acceleration and can get deep into your fly reel backing or spinning spool faster than election-year politicians ask for money. As your line stretches out drag increases significantly – so starting a little too tight can have terrible ramifications. To lessen the effect of increasing drag pressure on these fish as your spool gives up line, lower your rod tip toward the speedster to relieve a little bit of the bend. Bring the rod tip back up to a normal fighting position after the run has slowed and you’ve made up some line.

False albacore will fight to exhaustion before you can slide them gently into shallow water tight to the shore. That means they’ll generally require some revival efforts to survive a release. If at all possible, unhook the fish in the water as opposed to dragging it up onto shore. Have a pliers handy to help remove the hooks, and take some time to walk the fish so that water passes over its gills until it begins to regain its strength. If shooting a photo or two, work quickly to ensure a successful release. Once an albie is ready to head back out to sea, it will generally give a stiff shake of the tail to break your grip. At that point you can enjoy the second-biggest thrill of hooking and landing these amazing lightweight tunas – watching them swim away to battle again another day.