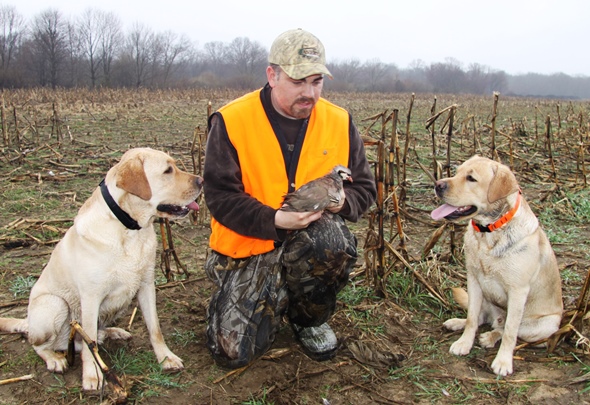 Daniel Johnson and his labs admire a chuckar at Birds Unlimited Hunting Club of Long Island, Manorville, NY. Pheasant and chuckar offer post-season thrills if you are willing to ante-up and hunt on a shooting preserve.

Roy Bender had an easy shot and he didn’t miss. He had taken only a dozen steps into the heavily trampled corn field with his three-year old Brittany Spaniel, Barney, when a beautiful Mongolian cock bird exploded into flight just 20 yards out. For an instant, the big bird seemed to hang in the air as it awaited a puff of breeze to load its wings for a hard veer toward the dense woods nearby. Its desperate sails never filled, however, and Bender dropped that rooster on the spot while lodging only a couple pellets below its neck.

Not every bird is so unfortunate at Birds Unlimited Hunting Club of Long Island, an upland shooting oasis some 60 miles east of New York City, but the vast majority that flush do eventually end up in a crock pot or as the guest of honor around the family dinner table. That’s because much of the 200 acres of shooting area here are wide-open fields of planted sorghum and corn framed by steady shooting backgrounds. Perhaps another factor is the inviting, flat terrain which allows hunters to keep pace with their pups while not exerting too much of their own effort. Pheasant are the primary target, but chukar are occasionally available and a few native quail still covey in the edges.

“I love this place,” said Bender, a club member, as we hunted together one January afternoon last winter. ” It’s a straight shot out from New York City on the Long Island Expressway (I-495,) which makes it easy to find. There is plenty of open space for shooting – and no hills at all. I can get in a morning hunt and still have plenty of energy to accomplish whatever I need to do later in the day. At 73, these grounds suit me just fine.”

Bender and Barney like to push the big field just outside the clubhouse and adjacent to the expressway but because these areas are so flat they don’t mind taking an extra pass and working up a little sweat through the woods bordering the western edge. Most of the birds that escape from the big field end up in this stretch, which is far more challenging to hunt. With a mix of oak, maple, choke cherry, scrub pine, hemlock and swampy areas, shooters need to be at their best if they leave the field, timing shots perfectly and swinging on birds passing through open slots between tree tops and tall brush. A similar but smaller planted field and woodlot combo,  half-a-mile to the west, is also worth investigating – especially if the larger field has been combed thoroughly in recent days.

While the Birds Unlimited Hunting Club grounds are convenient to reach and easy to traverse, don’t expect them to feel like the wilds of Maine. Cars, trucks and motorcycles generate a dull but omni-present background drone and the working farm grounds here sometimes sport huge piles of compost in addition to the ever-present dilapidated farm equipment that some might find endearing. It should be noted, however, that the club has been organizing yearly clean-ups and is making significant progress on reducing such undesirable clutter. They seem to be on the right track.

Birds Unlimited offers both walk-up hunts and scheduled tower shoots. The tower shoots take place in a wooded, sometimes swampy area and the birds get on shooters quickly here while weaving in and out of the trees. It is the kind of set-up where it helps to be lucky in addition to being a good shot. Because the winds affect the flight of the birds after their launch, tower shoot hunters rotate from stand to stand, ensuring equal opportunity for all. Eager dogs and agreeable handlers are provided to retrieve the downed birds. With a 26-person maximum (two per blind) reservations are a must as these shoots fill up quickly. Cost is $250 per person and the birds are divided equally at day’s end. Some years, the club also holds a tower shoot for mallards. Dogs and handlers that need a little polishing are welcome to get in some quality time afield at the tower shoots.

Non-members may book either walk-up or tower shoots by calling the club Monday through Friday. Walk-up hunts are scheduled for a half day afield with a minimum of five birds at a cost of $150 per hunter. Additional birds can be purchased for $30 each. Reservations are limited to two groups at a time on club grounds, ensuring plenty of open hunting space for each party. 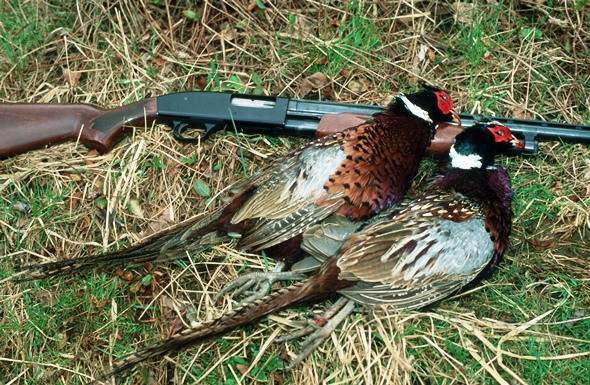 This brace of cockbirds were taken in late March. Bird hunting on a shooting preserve offers the chance to get out in mild weather – but be sure to get your birds on ice ASAP.

Hunters can bring their own dogs on the Birds Unlimited grounds, or hire a club-recommended guide and dog team for an additional $125 per half day. While upland bird hunting season ends on Long Island on December 31 each year, hunters are allowed to continue shooting on hunting preserve property through March 31. A New York State hunting license is not required for pheasant, quail and chukar hunting on shooting preserve property but is necessary to take migratory game birds and waterfowl.

Since the club was formed less than 20 years ago there are occasional growing pains to experience here, especially from a financial standpoint. Still, the club members and guided dog teams promote a laid-back atmosphere where encouragement and good will rule the roost, problems are addressed quickly, and members appear to be pleased with the club’s progression to date. New members are welcomed – most hunting clubs on Long Island have long waiting lists – and the application process for membership is fully explained on the club’s web site.

Membership runs $1,200 for new members and includes 25 stocked birds, hunting for unclaimed birds, clubhouse access, plus property access for dog training. For an extra $100, get the family membership and bring the whole crew along.

The clubhouse here is adequate for keeping warm, having a bit of lunch or simply relaxing after a great day afield. With a little bit of fundraising the club could spruce it up quite a bit and I’m told this is planned for the not too distant future. Be careful pulling in on the dirt road as it can be quite muddy right in front of the club house and there are points when the fields are soaked and the snow is melting that parking considerations need to be carefully weighed. Generally, you can negotiate this stretch without four-wheel drive as long as you park on hard ground.

For overnight stays, several bed and breakfasts are located in nearby Center Moriches and East Moriches. The Islandia Marriot is 25 miles to the west on I-495. You’ll pass it on the way out from NYC. Several national chain hotels can also be found 15 miles to the east in Riverhead including the Hayatt Place East End Hotel, which is right next to the Atlantis Long Island Aquarium and Exposition Center. Visit riverheadchamber.com for lodging information.