WHAT’S UP WITH MIDDLE BAY? PLUS MORE ON SNAPPERS, BLOWFISH, FLUKE AND BLUE CLAWS 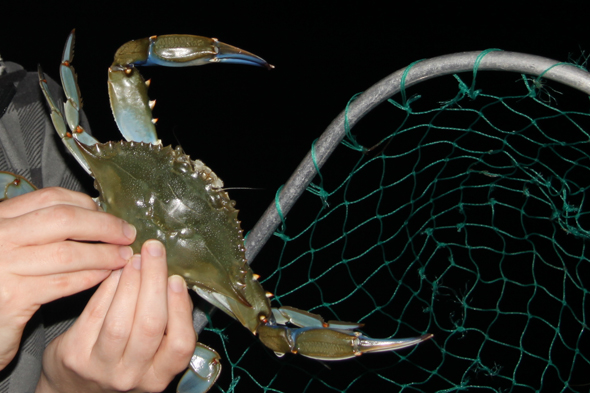 Snappers, fluke and blue claw crabs have been in good supply over the past few days.

It was an interesting week on the inshore fishing front as snappers, blue claw crabs and triggerfish all increased their presence substantially while keeper fluke consolidated in a few areas but seemed to disperse in others.

I had a chance to work the Middle Bay/Jones Beach area last Saturday, trying to turn on some friends to quality fluke fishing in the western bays where they’ve had some trouble hooking-up over the past few weeks. We found it a rough go, managing only a few shorts from the mouth of Jones Inlet back to the Meadowbrook Bridge, but little else. The area from the bridge back into Middle Bay and points west seemed almost devoid of life with even sea robins difficult to find. It should be noted, however, that anglers working from the Jones Beach piers continue to pick away at keepers, with a few summer flatties in the 4- to 6-pound class taken over the past week.

Upon arriving back at home, I opened my emails to find two anglers had asked “What’s up with Middle Bay?” Apparently, we weren’t the only ones having a tough day.

“It’s been tough up that way,” admitted Bill Witchey at Combs’ Bait and Tackle in Amityville. “For some reason, I don’t know if it is water quality issues or perhaps a cold inshore current in the area, there seems to be little in the way of baitfish up inside Middle Bay or further west in the Hempstead Bay complex this summer. Thus, very few fluke and blues have been hitting in that stretch. There are also few baitfish in the more eastern portions of the bay like Massapequa Cove and the Black Banks area. That stretch, however, does have plenty of grass shrimp and the fluke have turned on to these. So, basically, the best bay fishing in the Jones Inlet area is taking place east of the Wantagh Bridges.”

Witchey recommended that anglers try using very small bucktails with tiny, “snapper spearing” to better match what the fluke seem to be feeding on at the moment. He suggested trying a three-eighths- to one-half-ounce white, chartreuse or hot pink Spro bucktail with a small teaser set a foot above and fishing in on a light spinning setup with 8-pound-test Power Pro.

“Work the channel edges in 18 to 22 feet of water right off John J. Burns Park in Massapequa Cove, advised Witchey. That’s where Danny from the shop has been limiting out. Richie Hoffer, and Joey Coleman have also been working that area with great success. Early in the week they teamed up to deck 60 fluke, keeping ten with a top fish that measured a whopping 29 inches!

I’ll have to try scaling down my gear on the on the North Fork, too. While there have been some nice summer flatties available in deep water for boaters and the open boat crowd, catches have been very sparse along the Long Island Sound beaches east of Riverhead and in Peconic Bay west of Rogers Rock. Both areas seem to also be missing their usual summer baitfish population. Perhaps the fluke here are also feeding on grass shrimp? I’ll let you know what how my trials go on my Outdoor Tom Corp. Facebook page.

One person who hasn’t had any trouble filling his limit of fluke lately is the ever-dynamic Capt. Joey Leggio of Oceanside, NY. Fishing in the MS Fishing For a Cure Tournament with Jersey Justin, Bert, and Squiddy and Sean Low, Joey and pals hit Atlantic Beach Reef and fished the edge of the wall using baby peanut bunker with spearing. They left the fish biting after tallying a boat limit with plenty of three- and four-pounders, plus a top fish of 6.05 pounds. According to Leggio, Sean “Squiddy” Low was on fire as he out-fished the entire crew to take third place in the tourney. His secret? High-low rigs tied with 40-pound test fluorocarbon leader material.

Interestingly, the top three fish in this tourney were all caught by anglers fishing out of Bay Park Marina in Oceanside. First place went to Eric Gewirtz with a 9.55-pound fluke. Second place fell to Mike Redmond with a 6.50-pound fluke. The largest sea bass was taken by Mike Cotter with a 4.10-pound brute. The club division trophy was won by Atlantic Beach Rod and Gun club with a combined three-fluke weight of 16.95 pounds. Squaw Island Fishing Club finished second with 14.88 pounds of summer flatties while the Atlantis Anglers came in third 14.55 pounds. 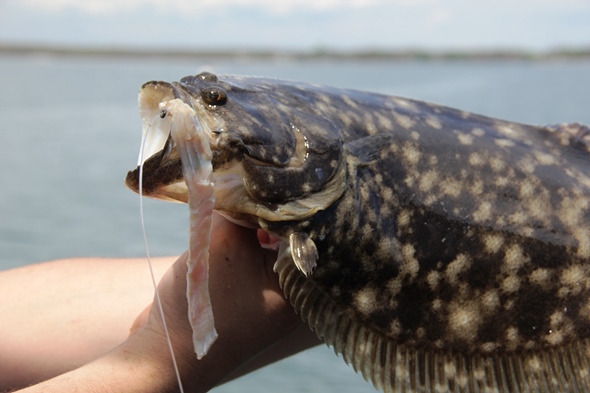 Montauk has been the fluke hot spot of late, but Fire Island Inlet may be worth a shot right now as a fresh batch of keepers have moved into the area.

The solid run of keeper fluke continued strong at Montauk this week, with many limit catches reported and an abundance of mini-doormats weighing four to six pounds coming from the North Side rips and 30-foot depths down along the South Side. Top baits have been simple squid strips tipped with spearing.

“Fishing has been fantastic, of late,” said Sharon Quaresimo of the open boat Miss Montauk. “We’re seeing tons of fish we don’t have to measure and our pool winners the past few days have run eight to nine pounds. That bodes really well, because August tends to be a big fish month around here and we are in full stride right now. There are fish in the North Rips and down the South Side with the best action in about 60 feet of water on squid strips and smelt.”

No doubt the Montauk fluke scene is hot right now, but the sleeper spot for fluke in the next few days may actually be the stretch between Fire Island Lighthouse and Fire Island Inlet on Long Island’s South Shore. According to Brendan Rutigliano at Captree Bait and Tackle, a fresh influx of keepers moved in strongly on Wednesday and Thursday but received little fanfare since the Captree fleet was mostly heading out to ocean where some very respectable sea bass were culled from among a multitude of shorts this week. “Spearing and squid combos are all you need to catch these fish right now,” stated Rutigliano. “Try for them on incoming water.” 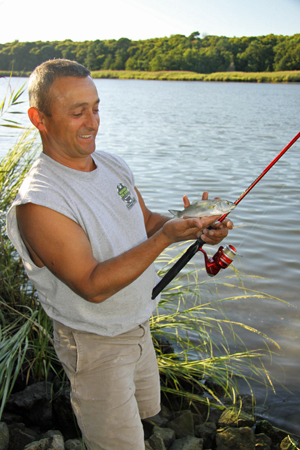 Snapper fishing is hot on both the North and South shores. This one was taken from tidal waters in the Peconic Bay estuary.

There’s never enough room to squeeze everything into my Friday Newsday column, so here’s some more on snappers.

Those looking for the perfect doormat fluke bait will want to gather and freeze up a few of the little blues before they get much larger, while those looking for a family fish fry will find the size right now to be the tastiest of the season. Either way, don’t get greedy. While the creel limit for bluefish is 15 per day, no more than ten can measure less than 12 inches in total length.

Snappers work great as fluke baits if used alive or dead. For live-lining, hook one through the eye sockets (or both lips) onto a fish-finder rig and simply drift it along the bottom. To use dead snappers, hook them through both lips to help keep the mouth closed. Alternatively, you can fillet them and use an entire side, hooked once, just as you would use a strip bait.

The best spots for connecting with snappers from piers, bulkheads and docks is wherever you find the most current. As such, pinch points where boats exit and enter marinas, the most seaward corner of a bay dock, or the mouth of a tidal creek, are all excellent bets.

This year’s annual Kid’s Snapper Derby at Captree will be held on August 16 and 17. Anglers 16 and under are welcome to participate. Call Captree Bait and Tackle for 631-669-0449 for details.

After two solid seasons in a row, blowfish got off to a very slow start this year. The puffers are now responding, however, and quite a few are being taken from docks by anglers opting to use squid or clam on the bottom instead of targeting snapper blues.

“One rig that works very well for the blowfish,” said Tim Caraftis at Caraftis Fishing Station in Port Jefferson, “is a tandem-tied bottom rig with small sproat or even Chestertown hooks. Add a red bead just above each hook. For some reason, that seems to stir the interest in puffer fish.”

Caraftis went on to say that a decent number of blowfish have been mixed in with the snappers at the Port Jefferson Village Dock. One angler, in fact, had nine keeper puffers to about 10 inches in length on Thursday.

A few puffers are also mixing in with snappers at the Cedar Beach pier in Mount Sinai (along with some schoolies stripers,) at Shinnecock Canal, and around the Union Avenue Dock in Moriches Bay.