THE HUNT FOR DOORMATS: FEED THEM MEAT 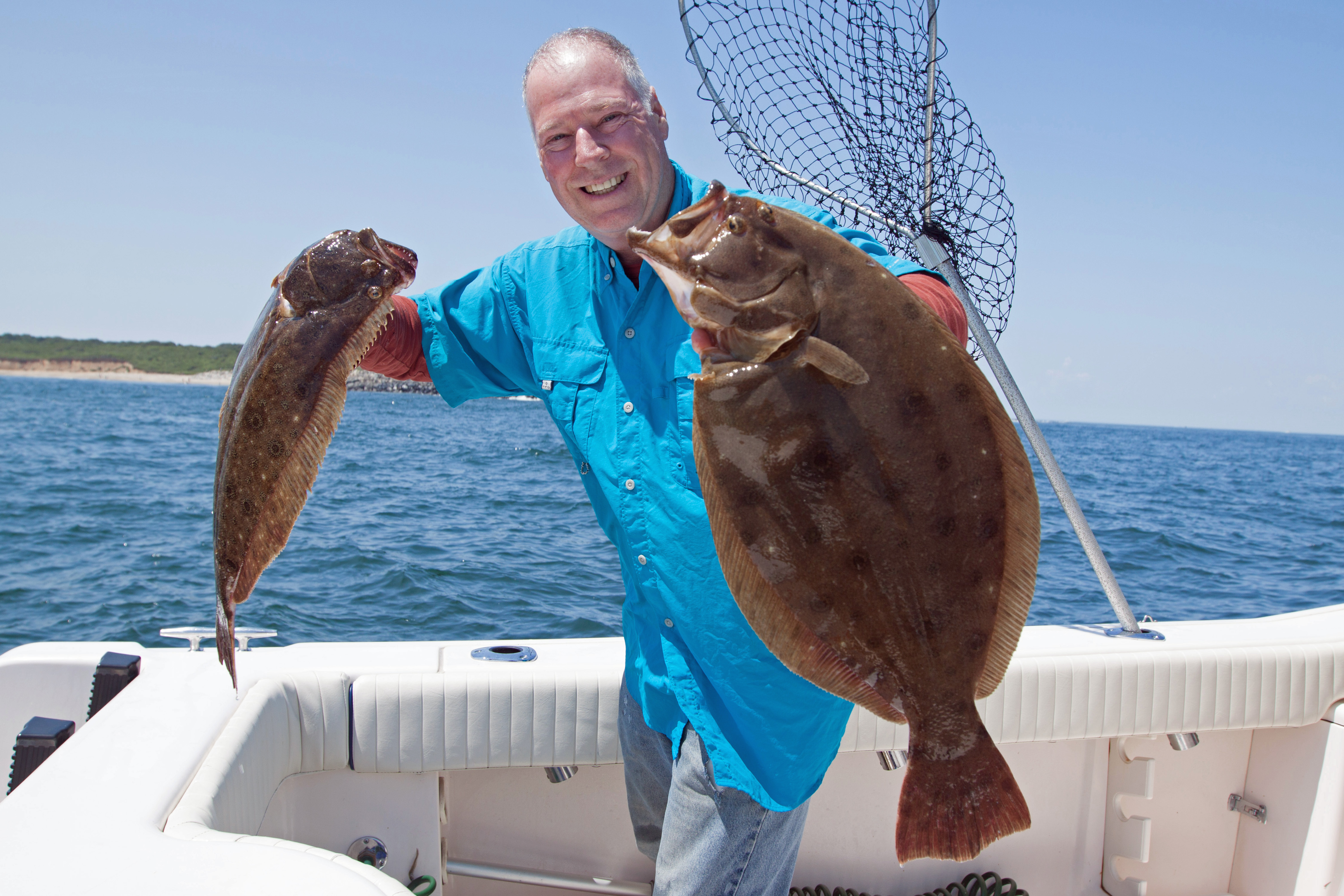 “Outdoor Tom” Schlichter with a brace of hefty fluke that fell for “meat” baits on the south side of Montauk Point, NY.

Fluke season is finally here so let the hunt for doormats begin – and target them with meat!

It’s a simple premise, really: Big fish like big baits, and the spring season offers one of your best bets at hooking-up with a summer flattie of trophy proportions. While its tempting after a long, cold winter to just get the rod bending with bucktails and a light-tackle approach inside the bays, inlets and harbors, they’ll be plenty of time for that come summer. For now, it’s a good idea to concentrate on catching that lunker of a lifetime for at no point this year will the odds be skewed more in your favor.

It’s squid that generally lure the biggest fluke into near shore waters early in the season. As the eight-armed cephalopods arrive on the scene in late April and May, you can bet the biggest doormats will be right on their tails. This initial encounter usually sets up in 50- to 70-foot depths of ocean water, typically along sloping banks and channel edges. As the waters begin to warm a bit, the big summer flatties slide a little closer to the beach, often shifting toward 30- to 40- foot waters within a mile or two of major inlets as the currents there stir up a mix of additional fodder including bunker, sand eels and spearing. They’ll also begin to settle in around structure inside the bays as the squid move on from favored areas. By using a variety of strip baits, you can target the biggest flatties in each of these environments and possibly come away with legitimate doormat bragging rights. 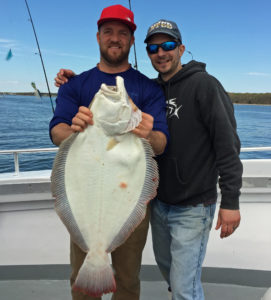 Dave Speil holds the fluke of a lifetime. This Peconic Bay 11-pounder was caught aboard the open boat Hamptons Lady.

As fluke season opens, long strips of thick and juicy local squid are probably your best bet for targeting doormats. I find a six- to eight-inch pennant-shaped strip gives me a good shot at big fish while still enticing quality keepers in the three- to four-pound class. To beef up my presentation and specifically target the biggest fluke, however, I’ll often add to my hook a second strip of squid measuring about two inches shorter than the first. Both pieces are impaled once on a single-hook bottom rig. While length is important, so is getting the width right. You want these baits to dangle straight from the hook bend in a fashion that allows them to wave gently in the current. To keep them light while still presenting a substantial profile, cut each strip to be no wider than an inch at the hook end.

There was a time when I used to drag whole squid on the bottom for big fluke, but I’ve actually caught more bruisers weighing over six pounds using the double strip approach in recent years. This approach saves bait in the long run, looks more alive in the water than a whole dead squid since the strips react to every twitch of the rod and, being less bulky, allows me to use slightly lighter tackle to keep my offering near the bottom. Whenever possible, I prefer fresh local squid because of its thicker flesh, cleaner scent, vivid color and added toughness, but frozen squid from other areas will suffice.

Because the flatties may be less aggressive than later in the season, it’s generally a good idea to opt for fresh bait over bucktails and soft-bodied plastics for this initial burst of summer flattie action. Presenting bait can be done slowly, offers plenty of scent to interest the fish, and gives your quarry something natural to chew on while it makes up its mind to fully commit. Bouncing bucktails and jigs may also catch fish this time of year, especially on bay and harbor flats, but the bait seems to be superior until the water begins to about 65 degrees.

A good rule to keep in mind when targeting early season doormats with big baits is to keep it simple. A long, thin strip of squid or fluke belly, or a squid strip and smelt combo is all you need. I firmly believe that less is more in the spring, so I usually opt for nothing more than squid strips alone during May. Many of the big fluke caught at this time of the year are feeding on squid – you’ll see them spit it up as they come to the boat – so using the strips seems to make sense. I also like that the strips stay on the hook well, allowing you to take your time setting the hook without fear of losing your bait. On days when the fish are particularly finicky, however, I will consider opting for a single smelt or spearing bait.

Another reason for sticking with real bait during the spring season is that the fluke tend to hold in relatively deep water. Oftentimes you’ll fish in 20- to 60-foot depths, requiring six to ten ounces of lead to hold bottom. That’s too deep to offer much control of the one and two-ounce lures most anglers like to use. If you do opt of the lure route, choose a heavy fluke bullet, say four to eight ounces, and tip it with a squid strip. These lures have enough weight to get to the bottom and keep your offering in the strike zone – but straight bait is still a better choice if the fish seem a little sluggish on the bite.

STRIP BLUES FOR THE RIPS 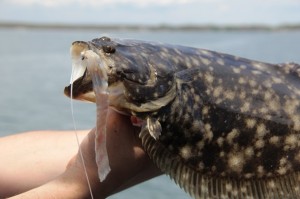 Although squid is a universal bait that can be used just about anywhere for fluke, I prefer bluefish strips when working in areas with pronounced rips. As I see it, the choppers are cutting in and out of rips all day long and, thus, fluke there are probably very aware of their presence and scent. Also, the stronger current in rip areas tends to work these heavier, slightly stiffer baits a little better, flushing their scent into the water and adding a gentle undulating wiggle.

I’ll generally switch over to bluefish strips as the squid start to make themselves scarce – which usually happens as soon as the choppers arrive on the scene. Like squid strips, bluefish strips should be cut long and thin. Strips sliced from cocktail blues are ideal as they are not too thick. If you need to use strips cut from larger blues, trim off some of the flesh so that each strip measures about half-an-inch thick. Use only one strip at a time with the blues because two strips of this meat has a lot of weight and doesn’t hang well from the bend of the hook.

As the water continues to warm and fluke settle down into more of a summer pattern in June and early July, doormats tend to gravitate toward structure. At this point, think wreck perimeters, submerged bounder fields and gravel bottom transitions. Also think bergalls for the pesky cunners of bait stealing lore make terrific big fluke baits when fished around hard edges. Porgies work, too, especially in areas where they mix in with summer flattie catches made on the drift.

Since larger bergalls have been tough to come by on near shore wrecks in recent years, I’ll make an exception to the strip length rule when using this bait. Four or five inches long by two inches wide at the hook end seems to be plenty enough size with these. To add a little more bulk, and better match the profile of the smaller bergalls that often inhabit local rough bottom, trim two strips to one-quarter inch thick and place them on the hook with the flesh sides facing inward toward each other. Lightly jiggle this offering on a tight line to the bottom and you can give a good approximation of the real McCoy.

Rigging consists of a 24- to 30-inch length of 30-pound test mono leader material snelled to a single 4/0 or 5/0 wide-gap or Octopus style hook. Tie the leader into the main line via a dropper loop four inches above a four- to eight-ounce sinker. Avoid using spinners and flashy adornments as they may wrap around the line when the current gets pushing – and skip high-hook teasers as they tempt too many smaller fish. I keep my rigs completely unadorned except for a pearl or day-glow bead placed immediately above the hook. Adding a chartreuse or hot pink skirt is fine, especially if fishing in discolored water. Either braid or monofilament will do as the main line, but braid does get to the bottom with less weight giving it the edge as you fish deeper water. KastKing’s KastPro braided line is a really good choice for this type of fishing. It’s thin but sports an exceptionally strong “Diamond Weave” that makes it incredibly tough and abrasion resistant.

In terms of how big fluke hit large strip baits, expect a fairly pronounced tap, or the sudden addition of a substantial amount of weight at the end of the line. In either case, ease your rod tip down toward the water while taking up slack line, then lift gently until the rod is parallel with the water’s surface. If you still feel weight at this point, pause for a count of five before setting the hook with a smooth, solid lift.

As you read this, big fluke are already sliding into near shore waters up and down the coast. Keep in mind that the fish you’ll be catching with this technique will tend to be big. Just because they are the crème of the crop, however, doesn’t mean you have to keep every one. Consider taking a photo and then tossing your next doormat back. By scaling down your presentation to use smaller baits, or working bucktails and soft plastic inside the bays, you can always go back to catching more standard keepers for the dinner plate.