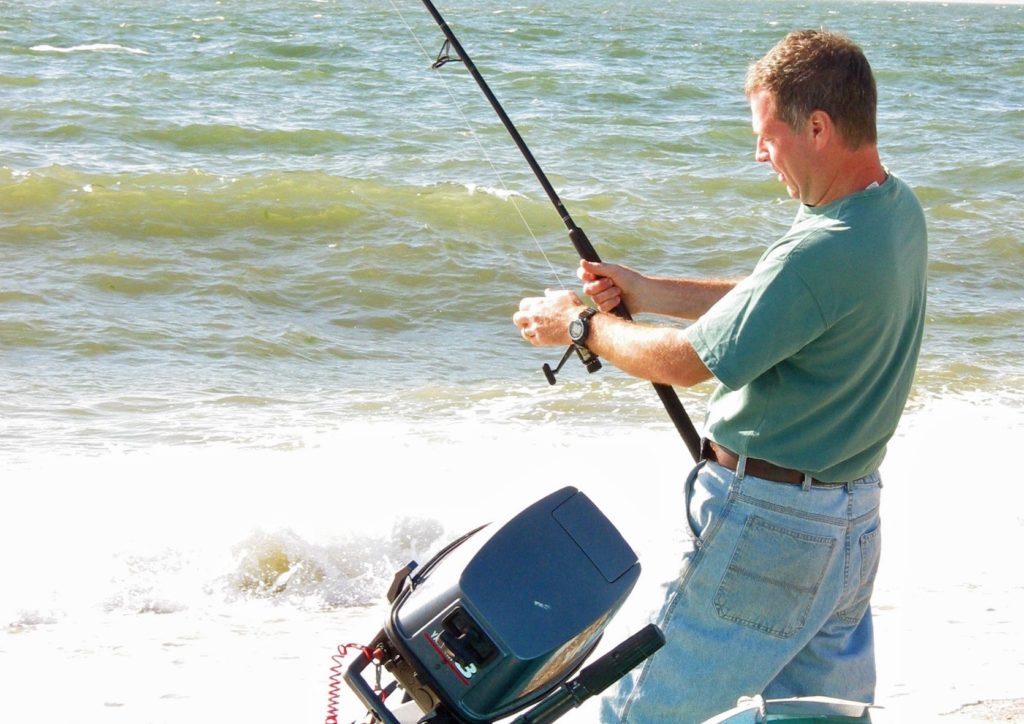 Pulling up to a sandbar, small island or raised flat can offer the chance to target fluke and other species that haven’t been pounded by the main fleet. OutdoorTom.com photo.

The eastern flank of the sandy island was slowly disappearing as the tide began to trickle in from the nearby inlet. As an armada of small craft buzzed up and down the main channel, I smiled at the obscurity of feeling very much alone while having the fish all to myself. I was on a sandbar, casting a small bucktail with my 6-1/2-foot spinning pole, and loving every minute of my stay. In another hour or so, the rising water would make this spot less productive and more difficult to wade, but for now I was enjoying every fluke that struck. Out of six fish, two were keepers. With dinner already assured, I switched over to a small Kastmaster tin and managed to tempt a small bluefish, which I quickly released, before calling it a day. 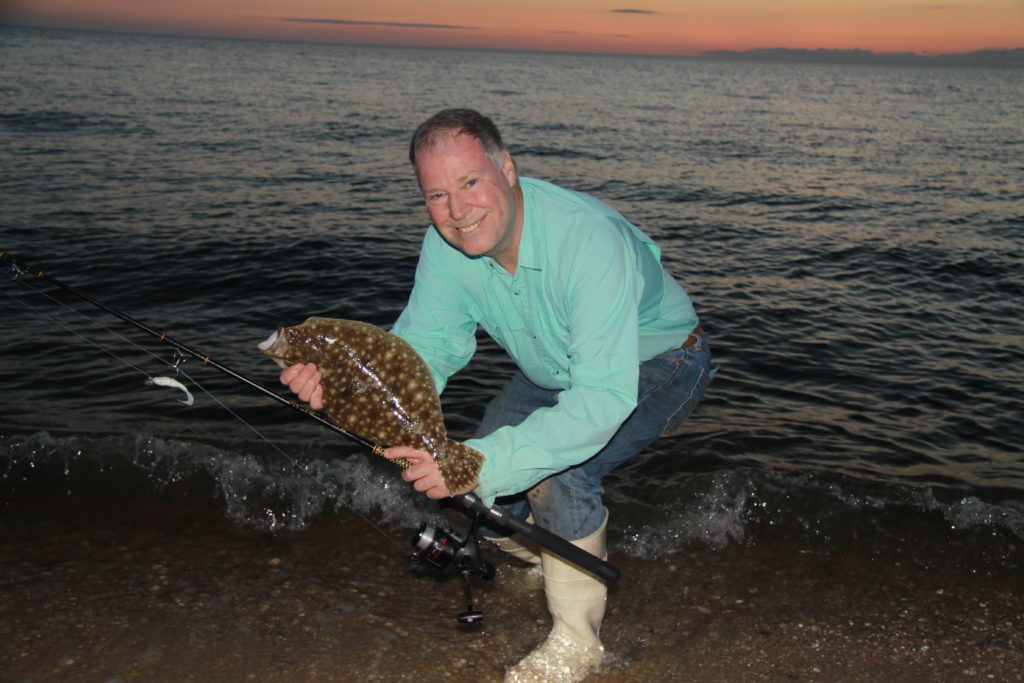 Get out of your boat to probe the edges of a small deserted island for fluke and you may be pleasantly surprised. Outdoortom.com photo.

The traditional means of catching fluke in most areas is to drift the main channels while working some variation of a minnow and squid combination. But there are other methods that can be just as productive if you are willing to experiment. Drifting back bay flats with your bait suspended five or six feet beneath a float is one option. Looking for quiet pockets of shallow water where you can bucktail with light line in moderate tides is another. My favorite way to catch fluke when I’m in a non-conventional mood, however, is to island hop. This calls for beaching my boat on an exposed sandbar or small sand island, stepping ashore, and wading the perimeter as I cast. Generally, it’s quite productive and occasionally it provides better fishing than drifting. Always, I find it a relaxing way to avoid the mayhem that can be found in most of the primary channels that criss-cross our local bays.

While such flats are places most skippers try to avoid, they can be productive fishing grounds for fluke, school weaks, cocktail blues and even an occasional striped bass if approached quietly and carefully. Throw on a pair of waders – or at least appropriate wading shoes – and you can fish these spots like any other shallow-water fluke hotspot accessible to shore-bound casters. The difference is you’ll likely have the entire beach to yourself. 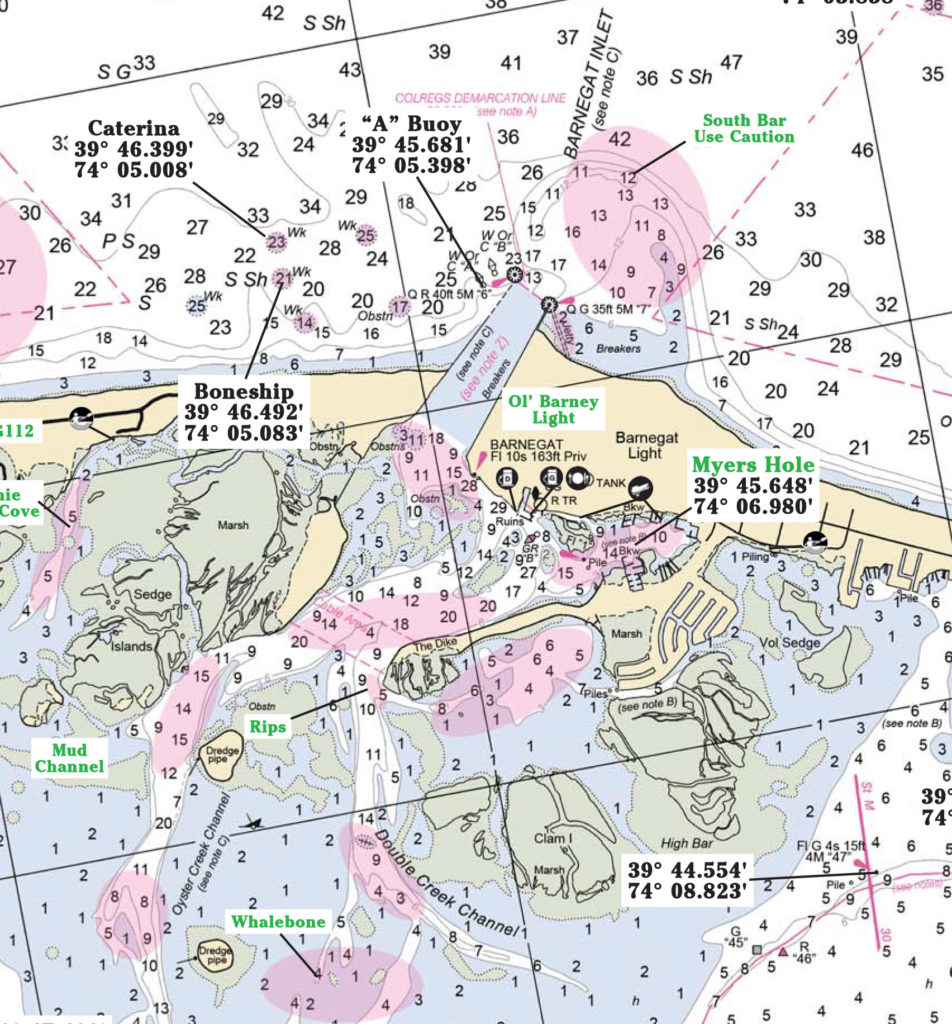 Many small islands and sandbars can be found in close proximity to inlets. Be sure your boat is safely secured before getting out to wade. Chart of Barnegat Bay, NJ courtesy of Capt. Segull’s Nautical Sportfishing Charts.

Naturally, this is an approach for relatively small boats as you’ll need to pull right onto the sand or anchor in very shallow water to get out of the boat and begin prospecting. Center consoles are perfect for this, as are tin boats, most rental skiffs, kayaks and shallow draft vessels under 21 feet. Generally, it is a good idea to try this at the start of a rising tide. That way, you won’t be left high and dry when the tide pulls out from under your boat. On the flip side, if you know you can get in and out for sure during low, the start of the ebb often sees the best action.

Given a choice, I’ll come into the shallows on the first quarter of outgoing water. This is when the shallow water fluke seem to be most active. Fishing on a dropping tide also leaves room for the flats to “grow” as the water draws off. Just be aware that you may have to lead your vessel out to deeper water every hour or so as the tide empties out. Be sure to anchor securely so you won’t be left stranded. Double-anchoring is a good idea.

Even though fluke are quite willing to enter the shallows, they still tend to prefer to keep a little bit of water above their heads. For this reason, I like to fish flats and islands that offer a series of “fingers” jutting out into deeper water, or places where I can cast to a cut or channel from water that’s knee-deep or less.

Working channels is pretty straight-forward. Simply get yourself in position to cast to deep water and have at it. Be sure, however, to keep back far enough from any stiff current so as not to put yourself at risk. As in inlet fishing, quarter the current with each cast and allow your offering to swing around as it drifts past.

Working “fingers” is a little more complicated. I like to look for areas where two or more short sandbars jut into deep water or form a series of troughs. These I work by approaching from the shallow end, then casting straight out into the middle. After several casts, I’ll move out on one finger and try casting across toward another, dragging my bait or lure across the bottom and through the deepest water. Work these fingers methodically, and from shallow to deep. Patches of dark water between or alongside these shallow fingers are often the most productive areas.

A big help in identifying potential hot spots is to look at your charts before heading out. I especially like Captain Segull’s Nautical Sportfishing Charts, shown here, as they also have reliable fishing hot spots highlighted. Find a sandbar or small island within the pink zones and you are instantly in the ballgame. 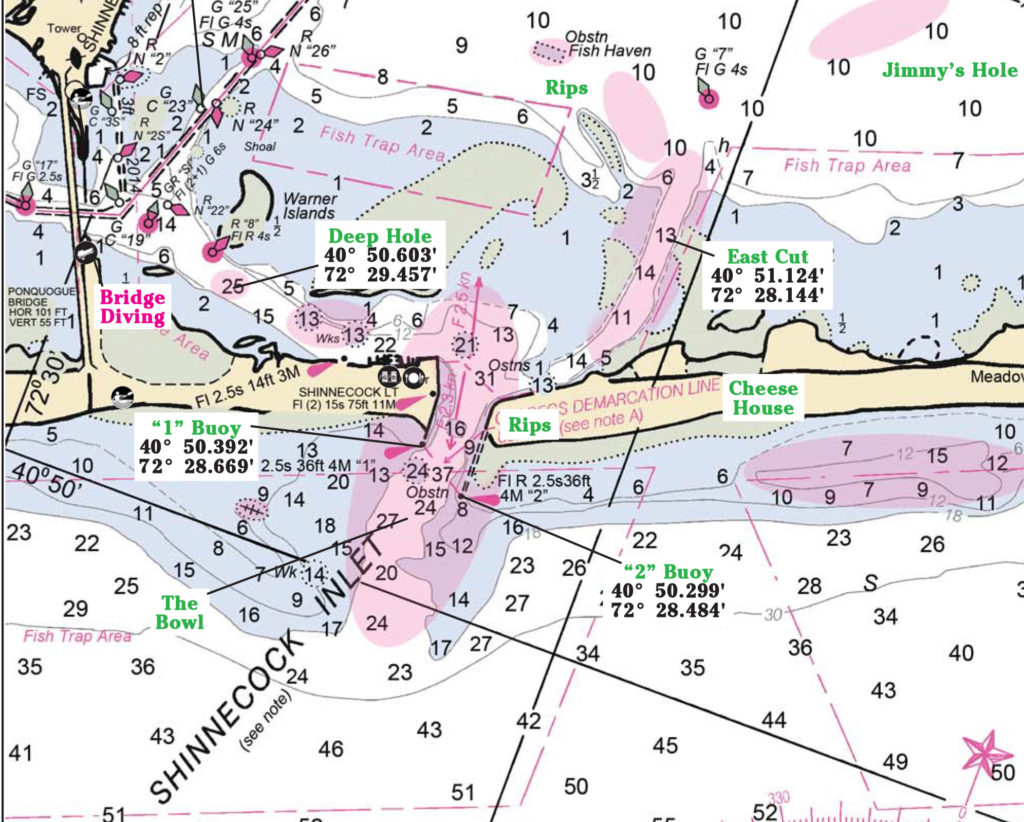 Long Island’s Shinnecock Bay is another spot that presents many opportunities to get out of your boat and cast. Chart courtesy of Capt. Segull’s Nautical Sportfishing Charts.

Lures work great on these shallow feeding summer flatties. Spro bucktails tipped with spearing, squid, Fat Cow jigging strips, a Berkley Gulp! grub or long, thin fish strip all score well. White is the primary color, but yellow and chartreuse might work better when the water is discolored and hot pink can be especially productive during the middle of summer when small calico crabs invade the bays.

The new Panther Martin Fluke Train is another excellent choice. Tip the  5/8- or ¾-ounce size with a 5-inch Berkley Gulp! straight-tailed jerk shad in white, chartreuse or Nuclear Chicken color patters and you are set to go. I like to skip this lure gently across the bottom, allow a two-second rest period every now and then, and then skip it some more. Some days, however, everything works best if just dragged slowly with as little extra action as possible.

Silver spoons and hammered spoons are other good choices and account for a lot of bigger fish in this skinny water game. Try tossing a Hopkins Shorty, Kastmaster or Johnson Sprite and you’ll eventually hook into some very respectable fluke. Any of these can be tipped with a pennant of squid.

Island hopping for fluke can start as early as mid-May but late June through August seems to offer the most potential. Early in the season, the flats can be very productive when bright sunshine warms the water. As the season progresses, the fishing tends to be best early and late in the day with overcast skies a big plus.

Shallow water fluking isn’t for everyone. It requires a lot of work and research to find the right spots to set up. It calls for caution as you wade along, and it requires a methodical approach to covering ground. Done well, however, this approach offers great rewards and a real challenge while providing a fantastic opportunity to get up close and personal with the bottom and environment that both anglers and fish seem to relish.

And, just in case the fluke don’t bite, bring along a scratch rake. No use wasting a dropping tide when there are plenty of quahogs to be had.