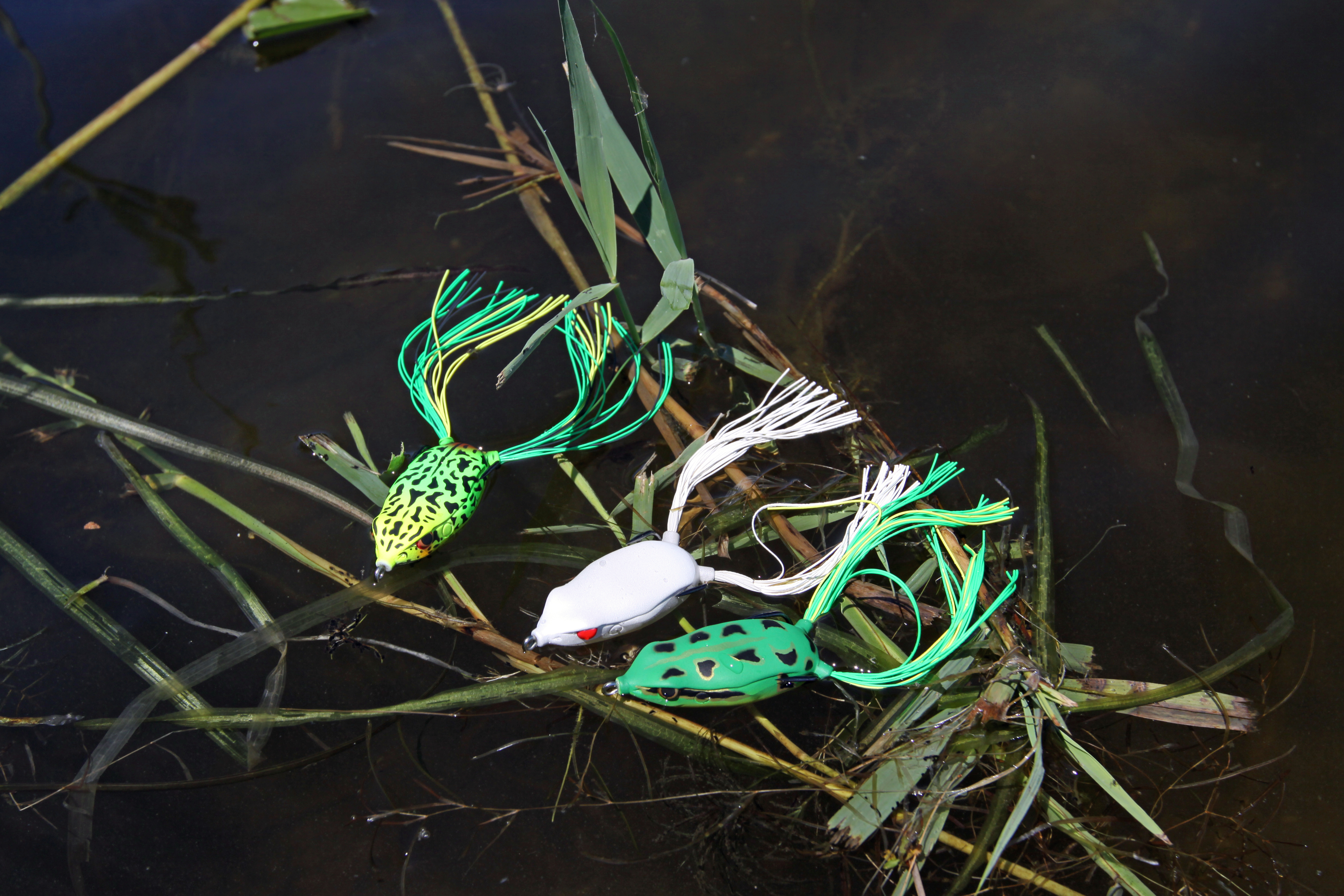 Weedless frogs are the ticket to a lot of big bass during the summer months. The author favors SPRO’s Dean Rojas Signature 65 frogs for digging out the hawgs. Photo by Tom Schlichter.

Up ahead, just off the shore, the beady eyes of a young bullfrog were raised slightly above the surface. As I eased my kayak forward to get into casting position for a little bass fishing, the small green creature kicked forward in an attempt to reach a set of nearby lilies. He never got there, vanishing in a washtub-sized swirl as a hawg of mammoth proportions sucked him under and powered deep into the weeds.

The very next morning, I was back on the same beat, working a selection of newly purchased weedless floating frogs tight against the shoreline and then out across the lilies. In one of the most productive mornings of bassin’ I’ve ever experienced, I hammered 12- to 18-inch chunky bucketmouths almost non-stop until 9:00 a.m. when the bite finally drew to a close. It was mid-summer and the bullfrog bite was in full swing.

Of course, that was far from my first time tossing frogs for shallow water bigmouths with great success. In fact, throwing frogs that morning was a no-brainer given the surface explosion I had witnessed the day before and several other large swirls I’d noticed along the shoreline. When the summer gets hot but the surface keeps erupting between the bank and weedy edges, it’s likely that frogs are serving as a main course.

I’ve been throwing weedless frogs of one type or another ever since saving my allowance and mail-ordering my first Snag-Proof frog from the pages of Outdoor Life Magazine back around 1970. Over the years, different manufacturers have come up with plenty of new designs – virtually all of them weedless – and bass pundits have added their take on a hundred different presentations. Through it all, though, one simple truth has continued to shine: weedless top-water frogs catch big bass – which is why I end up adding several more to my collection each and every year. 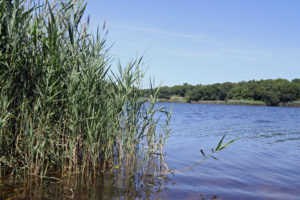 Phragmites present a great opportunity to work both in the brush and out front in open water. Photo by Tom Schlichter. 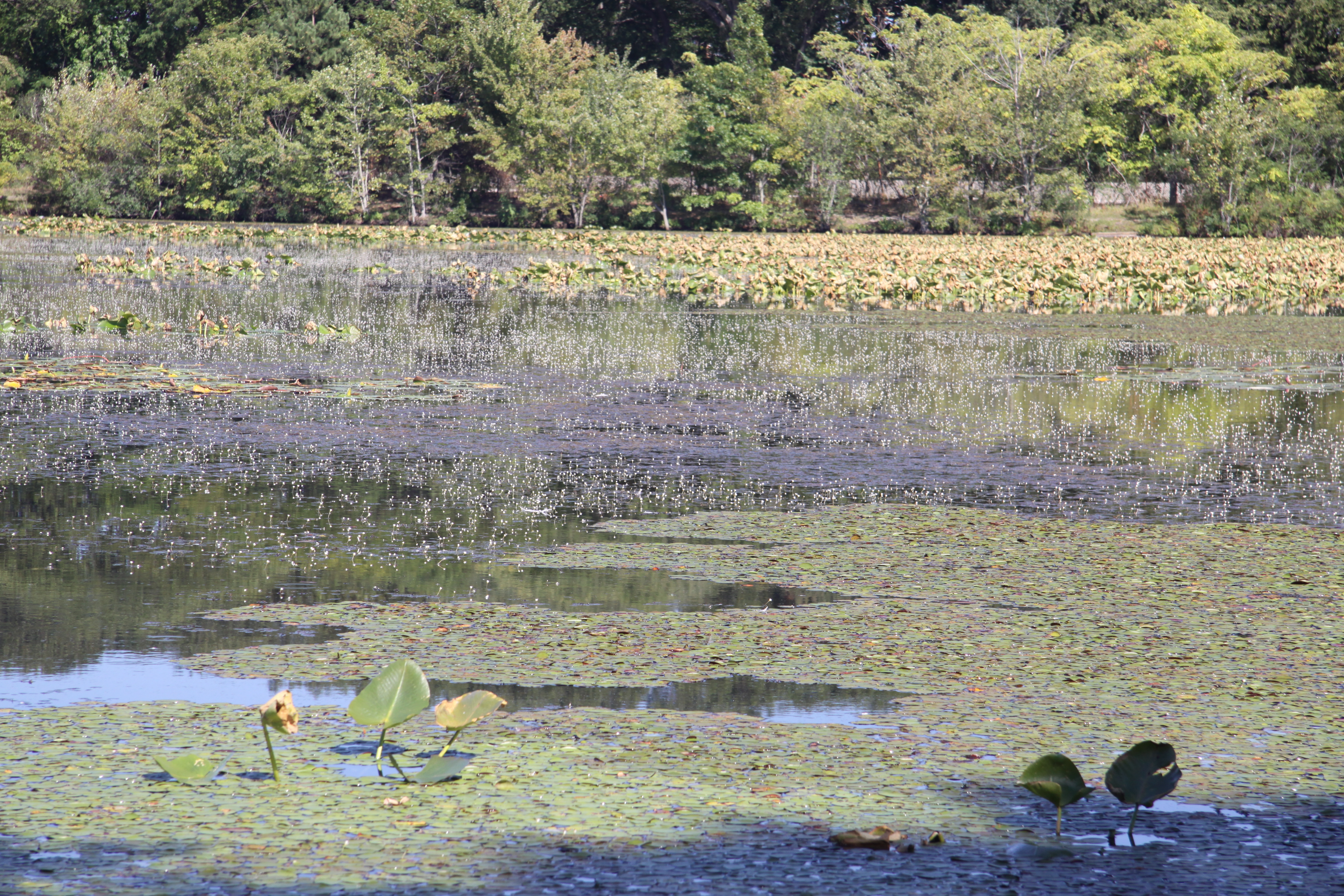 Don’t fear the weeds. With a weedless frog, you can pull big fish from the thickest mats. Photo by Tom Schlichter.

IS IT A POPPER OR A PIG?

Most bass fans think of frogs as being simple surface lures, but I prefer to think of them as a cross between a popper and a jig & pig.  I know, these two lure types are vastly different, but I often work my frogs similar to both during the course of a day.

Given the choice, I’ll begin probing with frogs in open water, often much further from the shoreline than other frog chuckers might consider. I especially like to toss these lures in 4 to 6 feet of water on large flats where a few straggly stalks of water lilies are barely holding on for dear life or, perhaps, a couple of aging stumps rise up to within a foot or two of the surface. I find that bass often transition around such structure, using it as way points when cruising between shallows and deeper water. They’ll also station themselves in such areas under cloudy skies. In either case, these fish can be frustratingly difficult to tempt with fast-moving lures like spinnerbaits and crankbaits, but they’ll warm up to a frog worked steadily across the surface with an occasional pause.

Generally I’ll begin by wading or positioning my boat a long cast from the target so as not to spook any potential lunkers. The presentation is simple: let the frog land with a big, fat splat to announce its presence, then let it sit for a spell. Depending on the aggressiveness of your quarry, allow the frog to rest for four or five seconds or as much as a full minute before bringing it to life with a slight twitch or two followed by enough rest to let the ripples clear. At that point, the retrieve begins in earnest with three or four “pops” followed by a two- or three- second rest and another round of pops.

As a rule, the more aggressive the bass seem to be on any given day, the quicker and more steady the retrieve pace necessary. On the best days, no rest is needed between pops. In fact, you can even walk the dog with these lures, although it takes a little practice to get the motion just right.

Undoubtedly, the application for which weedless top-water frogs are best known is probing shallow, weedy waters that are unfishable by most other means. Size up the thickest grass mats, most impenetrable lilies and phragmite or cattail lined shorelines and you are looking at prime froggin’ territory.

In this situation, you can pop your offering along the weed edges or across small pockets. Many anglers have success by casting a few feet beyond an opening and dragging the lure back into the pocket. That’s all fine and productive but for summertime action, I actually prefer to flip and pitch my frogs just like a jig & pig. I’ll pick a large lily leaf or dense head of grass at the edge of a channel, drop a frog right on top and then just let it set for a few seconds. Eventually, I’ll twitch it softly or maybe even lift it up and set it back down in the same spot several times. The idea is to build up anticipation in the fish before I slide the frog out into a space where it can be attacked. This produces some of the most vicious bass strikes imaginable. Develop the patience to make this presentation work and you’ll actually be able to sense the frustration in a fish as it waits and waits for a chance to grab its meal. Finally given the opportunity, a waiting lunker will rarely miss.

Another presentation that works well with top-water frogs is to toss them right up onto the shore, then hop them back into the water. Again, let your lure rest at first, then offer a slight twitch and second short rest before beginning the retrieve. On those late June and early July days when real frogs are hopping into the water as you work along a shoreline edge, this technique can bring about some awesome responses.

WAIT FOR THE TURN 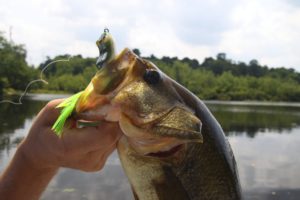 Not all bass are buried in the weeds. This one smashed a frog in wide open water. Photo by Tom Schlichter.

One mistake that novice froggers often make is striking too quickly. It’s understandable when you consider that the attack can be so flagrant but the end result is almost always a fish that misses the lure or shakes free on the first jump.

To really put the point to a hungry bass, let the fish completely engulf your lure and turn away from the ambush point. This allows the frog to be swallowed deeply enough for the hook set to stick. I usually bow to the fish on the strike, dipping my rod tip almost to the water before setting back with a strong strike. Some anglers use a count of three before reacting but I find my timing is better with the dip. Either way, cross the fish’s eyes and get it up and out of the cover as quickly as possible.

Of course, how and where you present weedless top-water frogs determines the tackle you’ll need. For working shallow flats with minimal cover, you can get away with a medium-action spinning stick and 8- to 12-pound test line mono or 20- to 30-pound test braid. For probing deep in the slop fields or tight to weed-choked shorelines, conventional style flippin’ and pitchin’ gear spooled with 14- to 20-pound test mono or 30- to 40-pound test braid will serve much better. In either case, tie the frog directly to the main line. Adding a snap, swivel or heavy leader can make the lure slightly nose-heavy and rob it of proper swimming action.

Some bass fans swear by a particular brand of weedless frog, but I’ve found that most of them work just fine in the hands of experienced anglers. More important to me is the color choice. Green, yellow, white and black are all on the recommended list.

As for specific brands, you’ll score well with SPRO’s Dean Rojas Bronzeye Frog 65 (affectionately known as Kermit,) and Paycheck Baits Transporter Frog, among others. Both of these are weedless-style hollow-bodied frogs that collapse on impact to reveal their hooks. Soft-plastic frogs, which ride lower on the surface but offer striking fish a more realistic flesh-like feel are generally referred to as toads. These are also worth investigating, especially if you have a lot of faith in working weedless worms, crayfish, lizards and similar soft plastics. Check out Strike King’s Rage Toad and Zoom’s Horny Toad to see if you prefer this style. Both of these can also be used just under the surface with addition of a small bullet weight ahead of the hook.