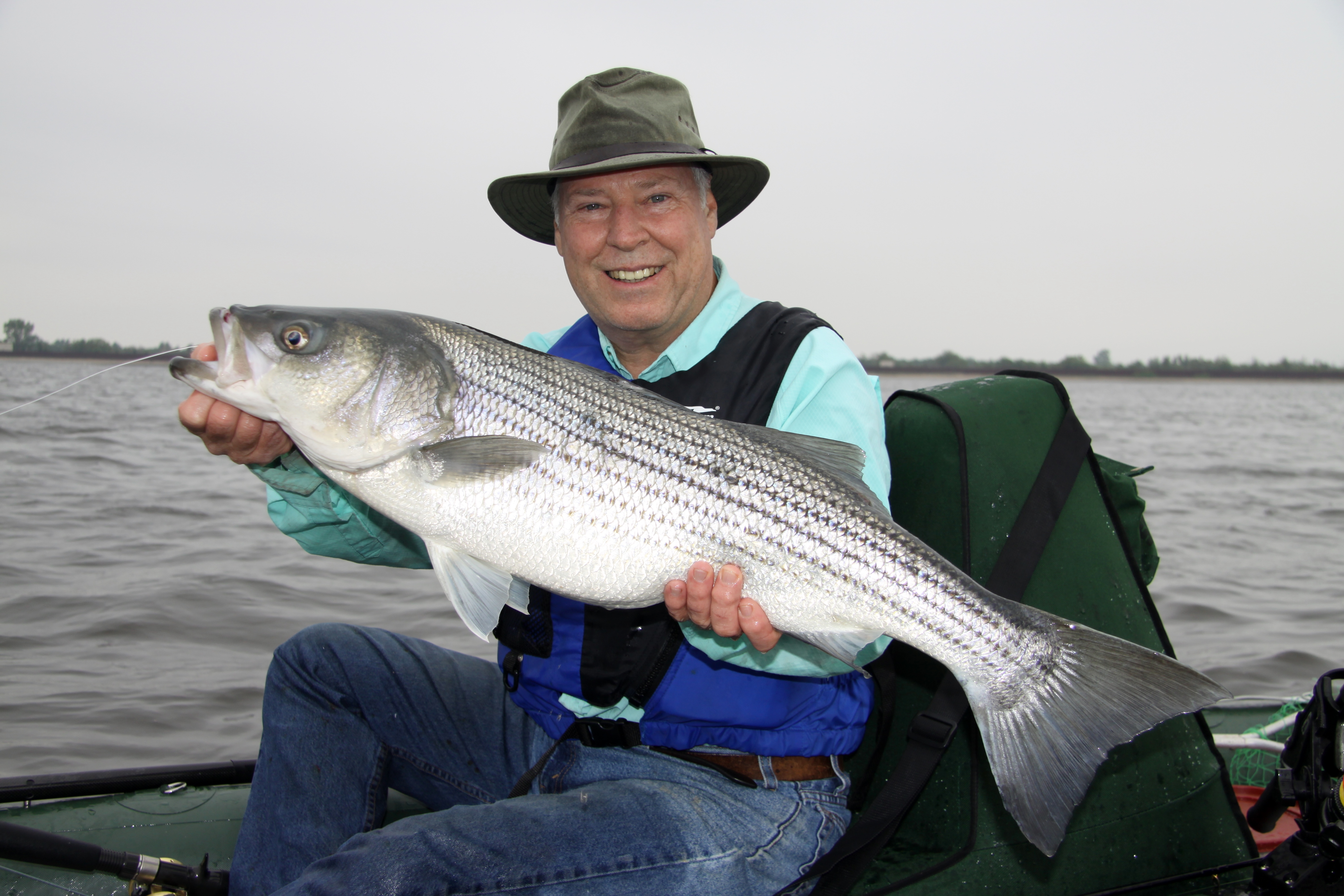 Live-lining can work both day and night. This chunky striper fell for a live bunker snagged and dropped back into the pods. Outdoortom.com photo.

It is no secret that live bait acts as a lightning rod for predator fish. In fact, the sport fishing fraternity has known for decades that live bait can be the quickest way to a wall mount. The bigger the fish, the more difficult it becomes to convince it to inhale a chunk of plastic, metal or wood. At least with live bait, you are offering the real McCoy. Live bait fishing is vastly different from casting or trolling lures in many regards but the big variance, as I see it, is this: With lures you are trying to fool the fish. With live bait you are trying to feed the fish.

That is not to say that live bait fishing is easy. Quite the contrary; it takes greater effort to gather and keep live these baits alive then it does to simply pull a bucktail jig from your tackle box – and there are ways of caring for, doctoring and presenting live baits that can greatly improve both the quantity and quality of the game fish you catch. All of this can be labor intensive and time consuming – and fishing with live bait still doesn’t guarantee you’ll score with that dream of a lifetime. Still, a live baitfish at the end of the line can even the playing field under some conditions, especially when the water is hot and predators are sluggish at the height of summer. It can also account for some of the most exciting catches you’ll ever score as predator fish rip into a bait right before your eyes, chase an offering to the surface before swallowing it in a Volkswagen-sized swirl, or inhale a live critter so large only a monster could scoff it down. 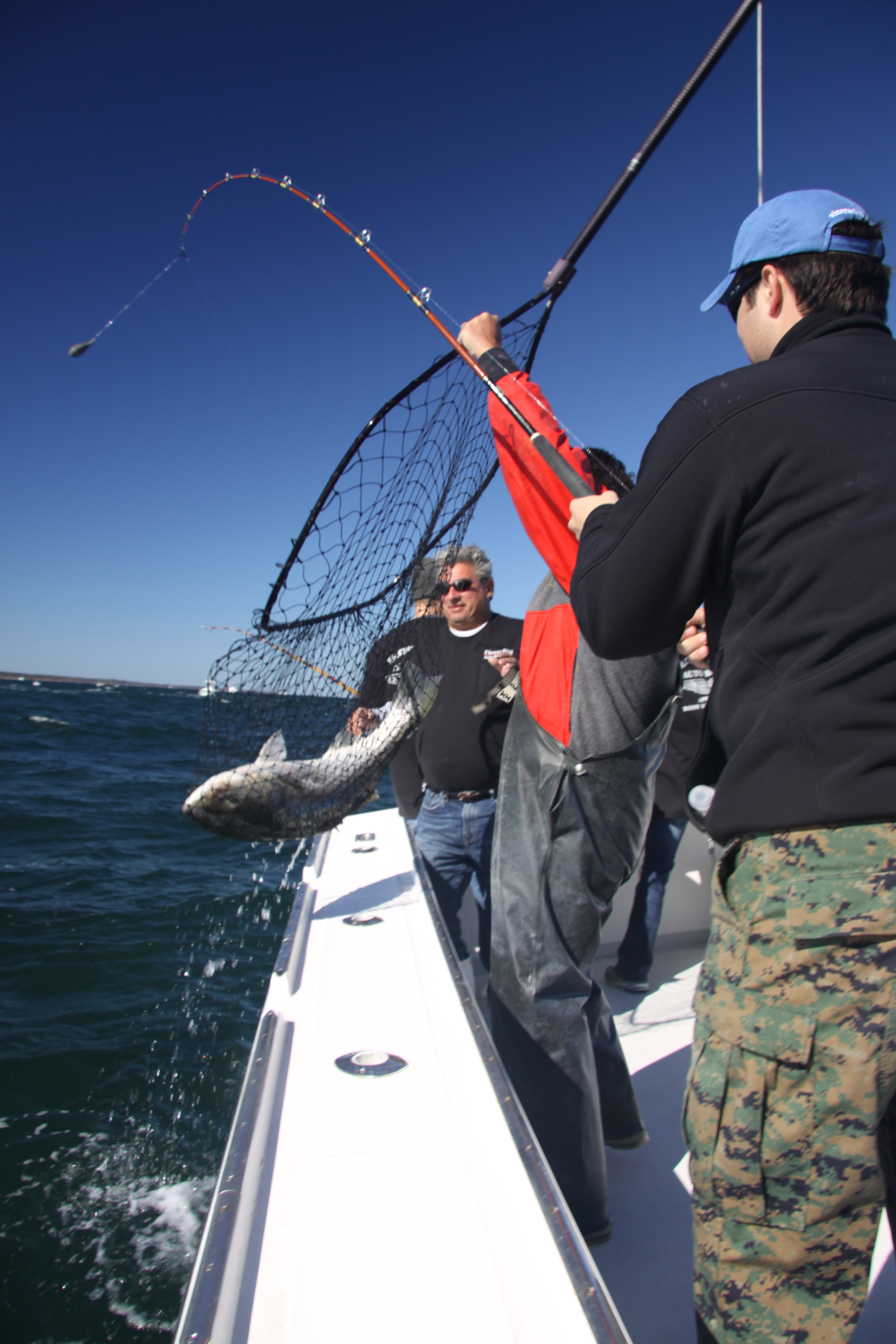 Live eels are one of the most popular live baits found along the East Coast due to their propensity to excite large striped bass. They are also one of the more difficult baits with which to work. Slimy, stubborn and able to contort themselves into a thousand line-tangling shapes, eels can be a blessing or a curse depending on how you prepare them for action.

The starting point with slimy snakes is to keep them cool. Put a few inches of ice on the bottom of a five-gallon pail – don’t place the eels in a livewell – and put a piece of burlap or a thick rag over the cubes. Now, dump up to two-dozen eels over the rag. It might take a few minutes, but the ice will chill the eels, slowing them down to a lethargic speed and making them easier to handle and hook.

To place a live eel on a hook, use a rag to grasp it right behind the head. While holding the snake tight, bring the point of your hook up through the lower jaw and out one of the eye sockets. Whichever eye socket you choose, the eel should drift behind the boat slightly to that side. Thus, if you are fishing side-by-side with another angler, one eel should be hooked out the left side socket, the other out the right side socket so the two eels will drift as far apart as possible. Bring the hook through the snout, between the nostrils, if you want the eel to drift straight. As soon as you lower your chilled eel into the water, the warming effect will reduce the lethargy, bringing the eel back to a feisty, fish-attracting state.

Of course, another problem with eels is that bluefish love them, which can make fishing with this bait a costly proposition as the choppers slice them in half. Thus, save your eels for the best tides and prime locations, and move if the blues invade the area and make it impossible to keep a whole live bait in the water for more than a minute or two. Half-eels left over from a pass through the chopper schools, by the way, can be filleted to make great, super-tough strip baits for fluke.

Certainly you’ve heard the adage that big baits catch big fish. Generally speaking, it is true. Offshore anglers fish whole, live bluefish for tuna, shark and marlin. Inshore, it is not unusual for a huge striper to inhale a scup or bunker weighing over a pound. Big live baits also work great for weakfish and doormat fluke weighing six pounds or more, with live snapper blues the premier offering. Unlike the eels, however, you’ll have to catch these live baits on your own as they are not sold in stores. You’ll also have to make sure that any live bait you bring on board is legally large enough to keep in order to use it. Often, the biggest problem to fishing live bait is gathering enough to use that are larger than the legal limit yet still small enough to tempt the predators you seek. Scup are a classic example of that quandary.

One way around the legal limit dilemma is to choose less acclaimed species for bait that have no minimum length limits. Live bergalls and cunners work well, for example, and they tend to weigh a half-pound or less making them just right for a mid-sized striper, large weakfish or doormat fluke.  Instead of forfeiting a summer flounder for striper bait, substitute a sundial flounder. This is the more round, nearly see-through flattie about the size of winter flounder but sporting teeth like a fluke. Tinker mackerel work well, too, as do spot. Want to try truly underutilized bait for stripers? Then keep the next small sea robin you catch. Trim off the “wings,” hook it in the soft flesh right behind the head and hold on tight as you feed it out into the current behind a drifting boat. Sea robins naturally dive toward the bottom, which is right where you want them to go. 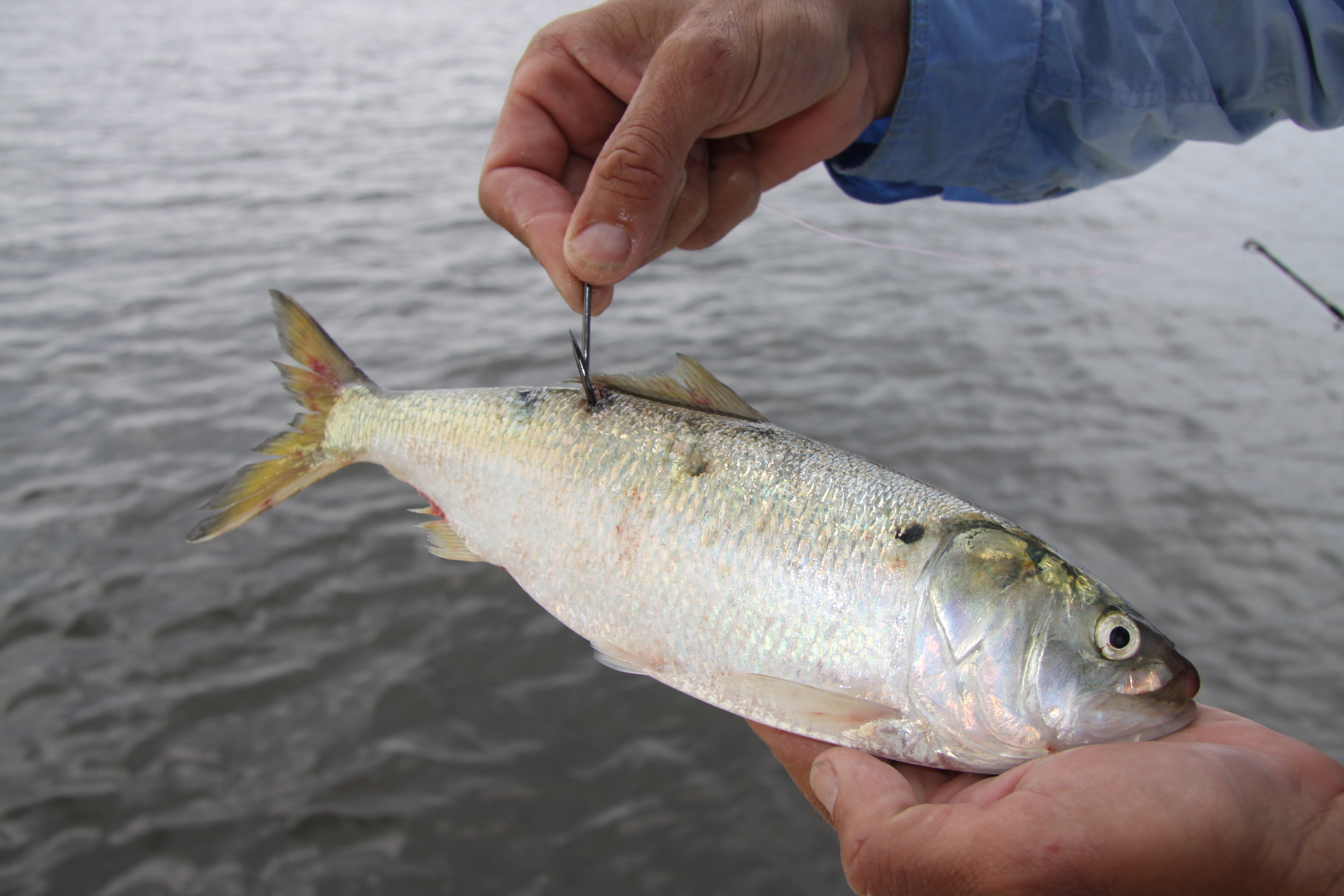 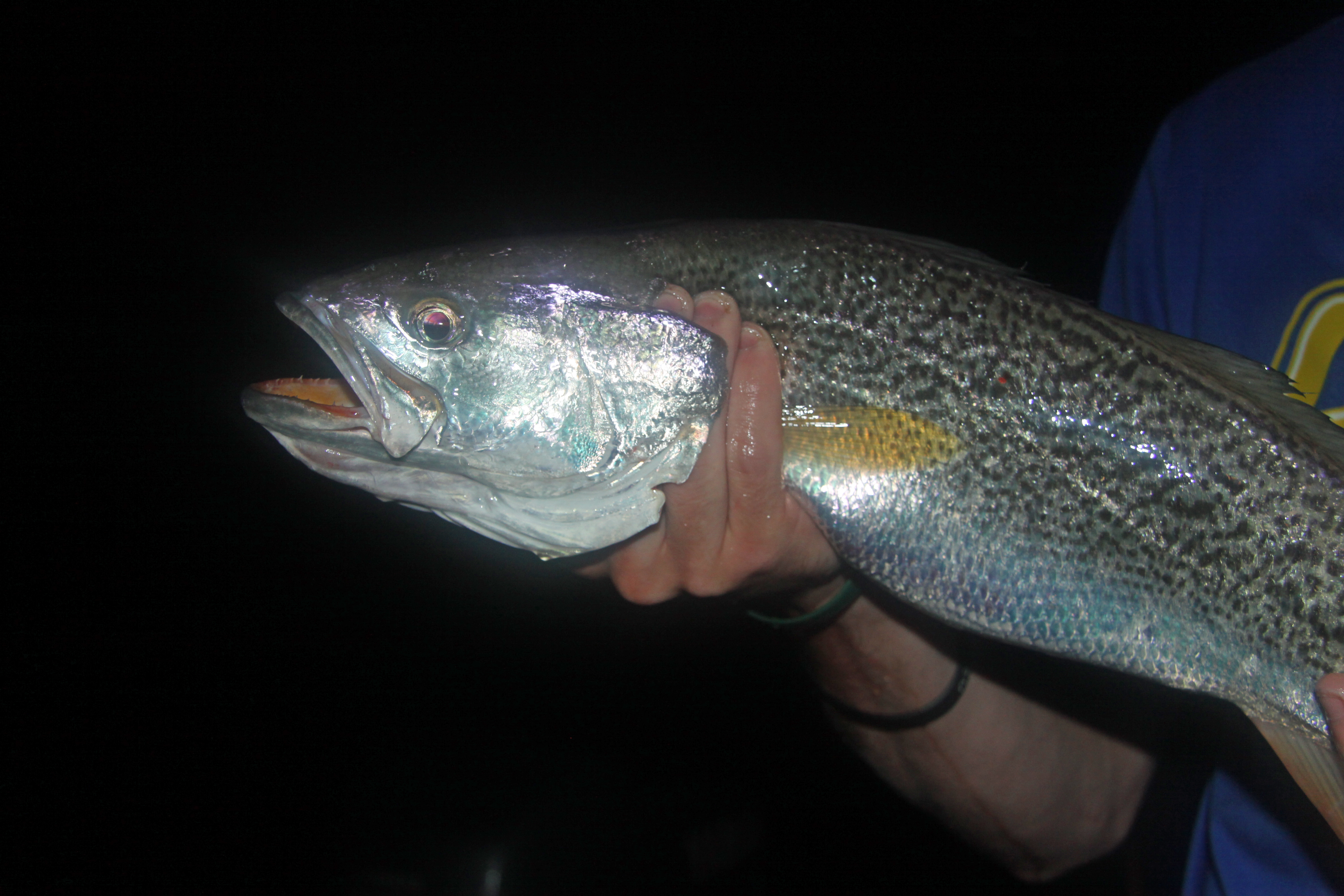 While species such as scup, sundials and sea robins tend to head toward the bottom with little help, other species such as herring, bunker, mackerel and snappers are less predictable. Any of these, however, can be doctored to dive deeper by trimming off the bottom fin of the tail. This will cause the top fin to push the fish down as it swerves back and forth in the current. Similarly, you can to a large degree coerce hooked live baits toward the surface by trimming the top tail fin so that the bottom fin is allowed to push the bait higher in the water column – a great aid when the bass, weaks and blues are smashing baitfish on the surface.

Hook size and weight also play a role in where your bait will present itself in the water column. This is especially so with smaller live baits. I occasionally use spearing, anchovies, killies or peanut bunker to tempt school bass and tiderunner weakfish in quiet bay or harbor backwaters. These baits I scoop with a long-handled net and place quickly in a livewell, pulling them out one at a time as needed with a small fish tank style scoop net.

To fish these small, lightweight minnows in a natural way, I’ll use a tiny, pre-snelled size 10 beak or claw style freshwater hook. The hook point is inserted just under the dorsal fin and the bait is cast out, unweighted, into an eddy or the quiet water around a dock, island edge, or directly down-tide of a large piece of structure.

With the light hook, the minnow struggles to stay near the surface, making it an obvious target for any predator cruising a late-night shadow line. If I want these minnows to swim a little deeper, I hook them through the mouth with a slightly larger point, and jig them slowly back toward the boat. Either way, I fish these minnows from a six- to eight-pound class spinning rig. I lose some fish to the light lines, of course, but it’s such a thrill when I do connect and win the battle.