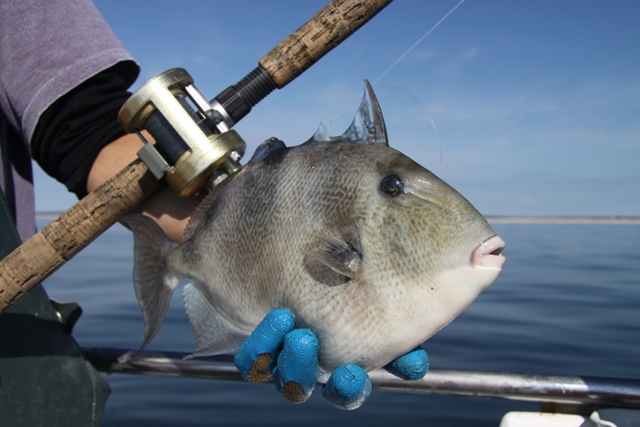 Some anglers point to triggerfish as an example of a “new” species in Northeast waters that’s thriving due to climate change. While warming seas may be a contributing factor, the gray triggerfish is no stranger to the Mid-Atlantic and Northeast coast. Occasionally confused with queen triggerfish – a true southern species – gray triggers are more likely reclaiming old territory than staging an invasion.

To be sure, I’m not overly concerned with how or why they’re getting here as long as they keep coming back for triggerfish are a feisty lot, excellent fighters on a pound-for-pound basis, and quite tasty. Generally weighing 1 to 3 pounds, they school tightly around structure, which makes them fairly easy to target. When in a feeding mood, they’ll chow down on worms, clams, squid or even a spearing, sand eel or live killie. Over the past few years, triggers have been most noteworthy as a fluke and sea bass by-catch. Today, however, there appear to be enough for a somewhat directed fishery, especially during late July, August and September.

Essential to mixing it up with triggers is finding suitable bottom structure. For this, consider your favorite blackfish or sea bass bottom. You can start by prospecting the deeper pockets around inlet jetties, looking specifically for places where you’ve pulled ‘tog in the recent past, or for areas where boulders or protrusions from the jetty deflect the current. You need six or seven feet of water, however, as the triggers like to hold tight a bit out of the sun’s reach.

Next on the hit list should be any type of submerged wooden structure located on hard or sandy bottom (for some reason, triggers seem to avoid mud flats most of the time). Small, sunken wood boats are ideal for this, as are submerged pilings and chunks of debris from previous storms. Any near-shore wreck has the potential to hold triggers, and ledges or sea walls can also serve as flash points for these tasty brawlers. Naturally, wreck and reef structure can also be productive and, in fact, boats sailing from some ports in the Tri-State area actually count the triggers as part of mixed-bag catches when targeting sea bass and scup.

If you’ve fished offshore for tuna, you’ve probably come across schools of triggerfish holding under small bits of debris the way that mahi are fond of doing. Sometimes, a large school will be competing for space in the shadow of something as small as a two-by-four piece of lumber. Knowing this, it should come as no surprise that triggers in our inshore waters can often be found holding in the shadows of buoy markers. Generally, this occurs up close to inlets or harbor mouths. 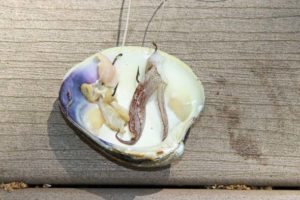 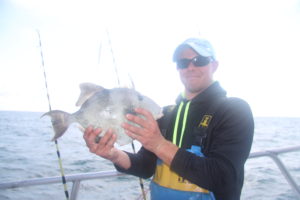 TOUGH HOOKS A MUST

Okay, I think you get the picture. Triggerfish like structure, shade, sandy or rocky bottoms and at least a fathom or two of water overhead. Now, how do you catch ’em?

To begin, gear up from the conventional side. Your favorite conventional bay blackfish setup and 20 to 30-pound test braided line is a good start. Triggers have bony mouths with large buckteeth and require a bit of backbone in the rod to really set the hook. Also, since you’ll be fishing around structure and the triggers tend to make a mad first dash, you’ll need a little power to turn their heads. Light tackle and spinning gear simply will not get the job done with this battler on a regular basis. That’s especially true when you run into three- and four-pound fish.

In terms of rigging up, either a tandem bottom rig or hi-low rig with the top hook set about 16-inches above the bottom is a good starting point. Sinker weight will vary based on current strength but for bay fishing, two to three ounces should suffice. The most important point to consider, however, is your hook selection. Because the trigger has such a powerful set of dentures, it can actually cut through a fine-wire bronze hook before you get it to the surface – even when you’re fishing in relatively shallow water. In fact, the first four or five triggers I hooked when I initially began looking for them over two decades ago cut my hooks clean in half! Forget about using porgy or fluke hooks and opt for a size 1 or 2 Octopus, or size 4 or 6 Pacific bass hook. These will give you a fighting chance.

For the most part, triggerfish are tempted in the same manner as blackfish and sea bass. Anchor up (double-anchoring is a good idea to fix your location on a specific point of structure,) lower a ribbon of clam or a three-inch segment of worm to the bottom, and keep your line still until you feel the bite. With clam baits, usually the trigger starts with a light tap or two before taking a hardy grasp of the hook. With worms, the bite is sometimes softer, but more singular – in other words, no love taps. In either case, upon feeling the weight of the fish, strike fairly hard and get your rod up over your head to turn the fish away from the structure and get it moving in the right direction. Now just hold on tight for the trigger will make a mad dash for the bottom, slow and pump for a minute, then make for the bottom again. If you beat these initial surges, your chances are pretty good that steady, constant pressure will get the fish to the surface in a minute or two – so long as the hook doesn’t get chomped.

TRICKS OF THE TRADE

When triggers are plentiful, there are no special tricks needed to get the bite started. Just get your bait down to the bottom and start fishing. If, however, the fish are playing coy or numbers are slim, lowering a chum pot full of ground clam to the bottom will usually provide a kick start to the action. After five minutes or so, slowly raise the pot up off the bottom two or three feet. Let another five minutes or so pass and raise the pot again so that it comes barely into view. Now that you can see the pot, if you stay quiet and still, you might actually see a triggerfish or two come right up to nip off tiny pieces of clam hanging from the mesh. To see a three or four-pound trigger do this is really quite some thrill. To actually bait one near the pot as you watch it is an absolute blast!

Another trick that works well is to flip an unweighted two-inch strip of squid on 15- to 20-pound test mono line line around the base of a buoy in an area known to harbor triggers. Usually, this works best around slack tide. Simply get your offering up tight to the chain and let it settle toward the bottom. If the line comes tight or twitches, set the hook and hold on tight. This is one application where spinning tackle actually has the edge over conventional gear since no sinkers are used and spin sticks are a better mechanism for flipping lightweight baits.

While structure oriented, triggers do seem to be a bit more adventurous than blackfish. Thus, if the piece you are fishing is chock-full of small sea bass or sand porgies, you can sometimes connect with the triggers by backing off several yards from sticky bottom. This buffer zone should help eliminate the pests from tapping your baits and allow a trigger or two a clean shot at your hooks. Keep in mind, too, that triggers, like blackfish, feed best at the start and end of the tide when current strength is soft to moderate.

Before I let you go, a couple of points need to be brought out about this species. First off, respect those teeth. I had one grab my middle finger years ago. That fish was half-filleted and I thought it was long dead. It suddenly jumped more than half-a-foot across the table to grab me and it held on for over four minutes. Let me tell you, I feel very lucky to have gotten my digit back in full as the pressure that fish exerted was tremendous – and I have the scars to prove it. I’ve since talked to several other people who have suffered severe triggerfish bites. I’ve even heard of scuba divers who claim that triggers placed inside their grab bags have bit them through the mesh. Be warned: this is one mean fish when it’s out of the water and caution is advised. Don’t let youngsters anywhere near them.

Lastly, know that triggers are actually more numerous in the ocean than they are in the bays. Inshore wrecks and reefs, the same ones that produce sea bass, porgy and blackfish, often hold plenty of triggers from August through late September. Get out and give them a shot because right now is prime time.