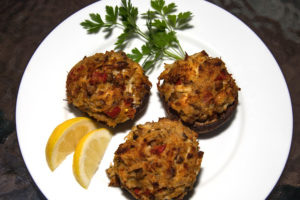 If you are lucky enough to have a secret crabbing spot, you can easily catch enough fresh and tasty blue claws to make this recipe from mid-summer through mid-fall. If you can’t get them on your own, lump crabmeat will be fine.

Blue claw crab, by the way, freezes well as long as you keep it in a sealed container. You can freeze the crabs whole after removing the top shell and lower section and rising out the tomalley, or pick all the meat free and freeze it separately. Claws can be frozen as well. Do not store crabs or claws with shells in freezer bags as the shells will eventually puncture the plastic and spread their scent throughout the freezer.

Stored shells and legs also make a good starter for a seafood or crab stock or chowder.

Cooking Time: 25 minutes or until golden brown on top

Note: Unlike baking, cooking is not an exact science. Readers are encouraged to adjust and modify these recipes to their own tastes.