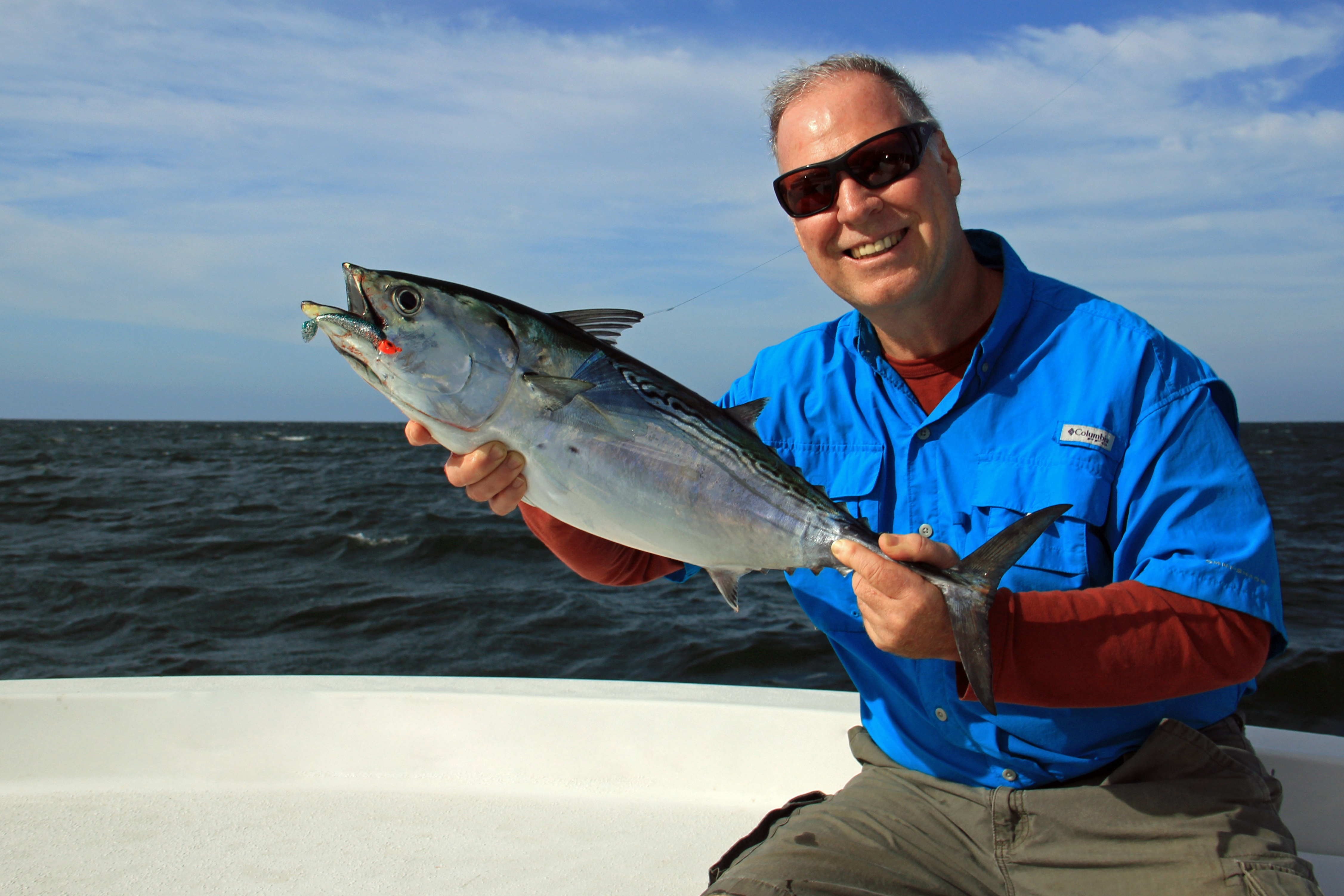 Not matter where you catch them, false albacore are a ton of fun on light tackle. This one smacked a small paddle tail soft plastic on a 1/2-ounce jig head. Photo by Felicia Scocozza.

“Smack!” My line stretched tight and instantly began peeling from the reel as my first false albacore of the morning powered through the rips. As the spool quickly reached the half-full mark I wondered for a second if the little tunny would ever tire. Eventually, however, it began to circle and I realized the 8-pounder would be mine. With the battle over, I grasped the solid Albert by its tail and then twisted free the small tin that had caught its fancy. A quick release completed, I took a second to thank the fishing gods for having smiled on my day.

Call them what you like, these are all the same species of fish. Although false albacore may look and act like small tuna, they are actually members of the mackerel family, Scombridae. Here in the Northeast and Mid-Atlantic states, they generally show up at some point in August, growing increasingly aggressive with each passing week as water temperatures slide into the mid-sixties. That’s when the Alberts drive inshore to meet the outflow of small baitfish pouring from bay and harbor waters. They’ll key on spearing, mullet, peanut bunker, bay anchovies (rain bait,) sand eels and snappers, coming within easy reach of both small-boat anglers and beach fishermen.

Because false albacore are powerful swimmers, they tend to favor areas of strong current where baitfish get pushed around and become disorientated as the tide comes and goes. Expect them to show regularly at inlet mouths, in powerful rips, off prominent points and along stretches of open ocean beach where the current sweeps parallel to the shore and tight to the breakers. They’ll feed in deeper rips all day long if bait is plentiful but usually reserve early morning and early evening hours for shallow water forays that bring them within reach of surfcasters. If water temperatures remain above 60 degrees, they’ll stick around right through October.

HEAD THEM OFF AT THE PASS

Like bluefish, false albacore seem to enjoy making a scene on the surface as they tear into schools of terrified baitfish. You can tell them from the choppers by the smaller pods pushing forward at an accelerated pace, and by the lighter splashes with which they slice the surface. Another tip-off is that few if any terns and seagulls dive on the albie schools. That’s because bluefish slash their prey but falsies swallow them whole, leaving nothing behind to excite the flocks. Watch carefully, and you’ll also notice the deeper, football-like shape of the albies as they porpoise in pursuit of bait. While the choppers seem to relish roiled breakers, false albacore prefer a gentler surface that allows them to more easily locate, surround and herd the baitfish schools that stoke their fire. 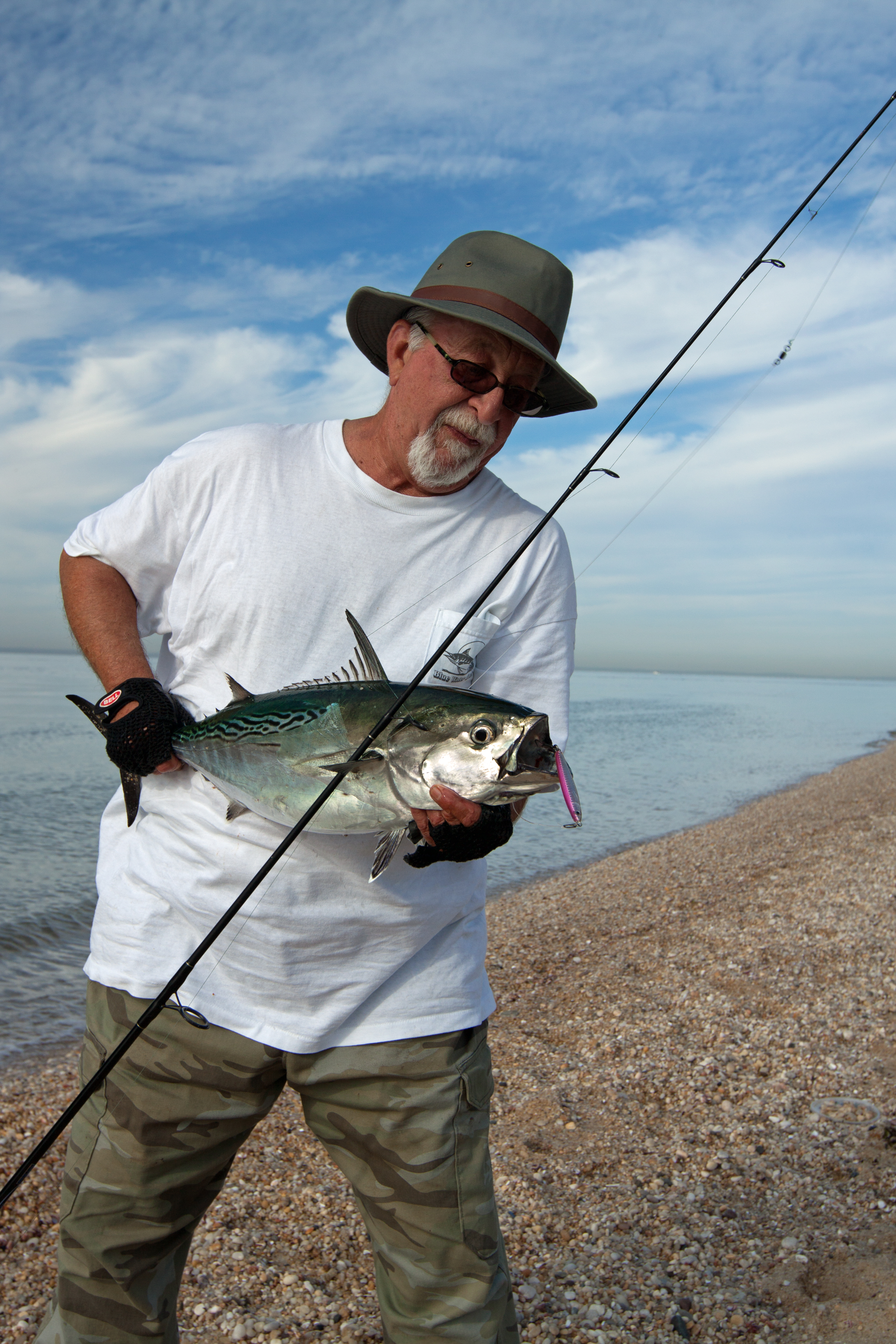 Fat Alberts, like this beauty caught and released by Michael Giagangacova, have no fear of shallow water and can often be found running the shoreline. Cast quick, for they are always on the move. Photo by Tom Schlichter.

Much has been written about the need to approach false albacore schools quietly and with as little disturbance as possible. This advice is indeed on target, for these are skittish gamesters. Roar up within casting distance at full throttle and the schools will sound or break apart. Several boats in hot pursuit can not only put the fish down for the day, they can flush them out entirely from small, productive pockets.

A better approach is to circle wide of feeding fish and then ease – or drift – quietly into casting position. If other boats are on the same pods of fish, get in line and leap frog ahead of the schools leaving as much space as seems practical between your vessel and the next. A little courtesy goes a log way toward keeping the fish on the surface and tempers in check under such conditions.

Keeping up with false albacore pods along the shore requires more physical involvement. Typically, the schools work parallel to the beach and the only way to stay on the action is to hoof it. As a school passes, make a cast or two and, if you don’t hook up, hustle in the direction the school was headed. Get ahead of any surface action you see before casting again. Although it is possible to drive the beach searching for pods of false albacore just outside the wash, this idea works best when the fish are well established, which isn’t often the case. A better idea is to concentrate your efforts at known albie hot spots such as beaches immediately adjacent to an inlet, harbor mouth or break wall. Cove areas also allow for up close and personal surf encounters with the false albacore as they chase terrified baitfish schools along the shore until pocketing them in the quiet backwaters of bends and curves. In fact, one way to head off false albacore at the pass is to look down the beach and scan for the nearest cove. That is where the shoreline action is most likely to end up before the albies vanish quietly back into the depths.

Considering that false albacore can top out at 15 pounds in our waters, they show a propensity to smack relatively small offerings. To this end, keep lures and flies on the smallish side. Tie small tins and jigs directly to the main line sans swivels, snaps or heavy leaders and retrieve these as quickly as possible while making sure to cast toward where the schools are headed, not where they’ve been. An AVA 007 or 27 tubeless diamond jig, Deadly Dick or Hopkins Shorty are all good selections. In the soft plastic category, a three- to four-inch long curly-tailed white or Arkansas shiner pattern grub, Slug-Go or Fin-S-Fish on a one-quarter to one-half-ounce jighead fits the bill. 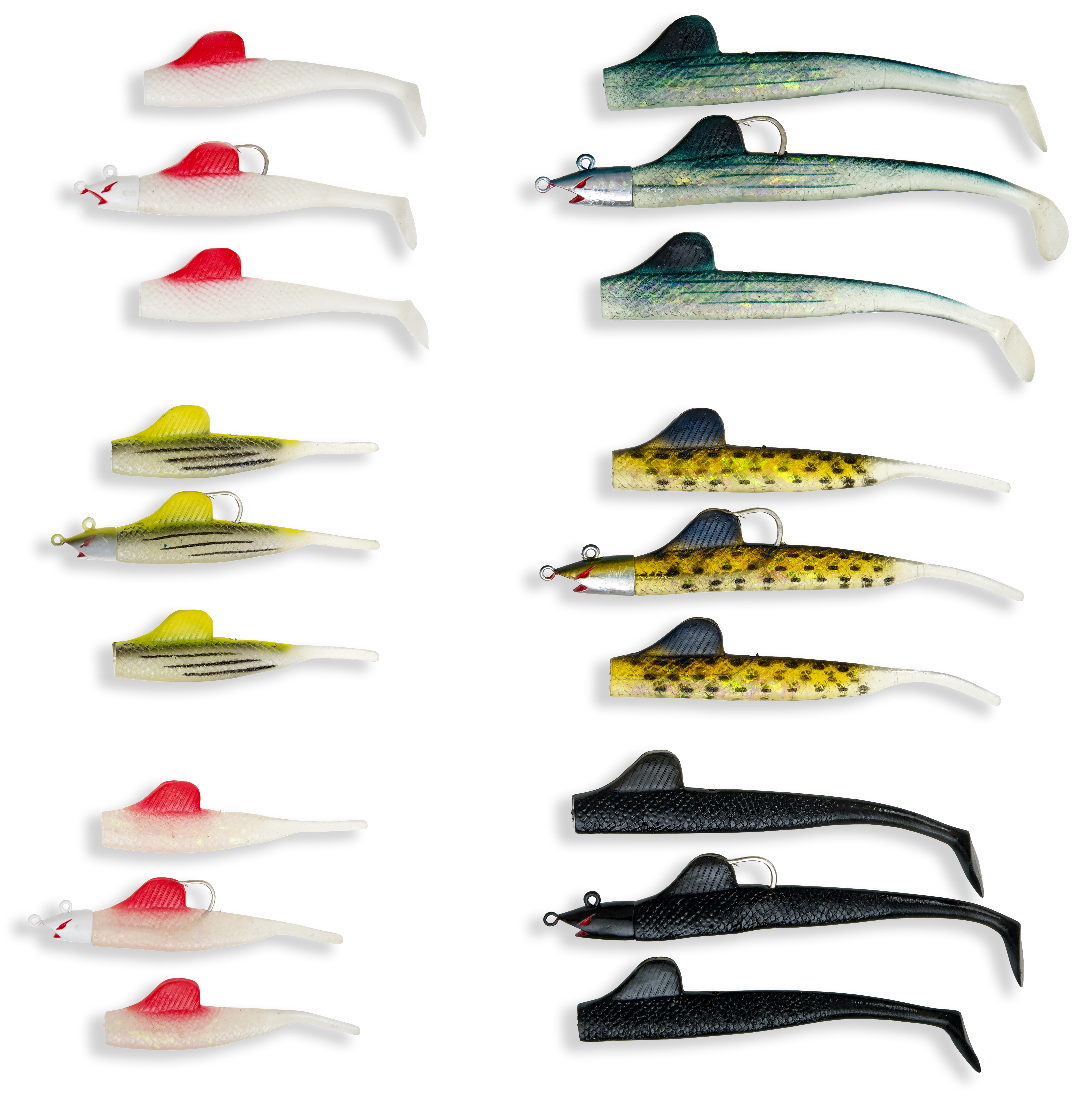 Panther Martin BigFin™ 3-in-1 Paddle Tail Weedless Swimbaits are the author’s go-to lure for false albacore from both boat and surf. They also do a number on stripers. Photo courtesy of Panther Martin.

Last year my go-to for false albacore both from boat and beach was a 1-ounce BigFin™ 3-in-1 Paddle Tail Weedless Swimbait that I helped develop for Panther Martin. It has a long, thin body to imitate sand eels, spearing, rain bait, etc., but it also has a large dorsal fin in which to hide the hook point and make it weedless. Amazingly tough, I had nearly 30 false albacore and over 125 fish total on a single body during October and November. From November mid-way through last spring, a second body held up for over 80 fish. That’s not to say a cocktail blue can’t chop of a tail now and then but overall they hold up amazingly well.

In addition to the albies, stripers to 34 pounds, bluefish to 16.5 pounds and weakfish to 4 pounds also inhaled this tight-swimming lure. The 5-inch, 1-ounce size in white/red worked best for the albies and school bass. Bigger bass preferred the 7.75-inch, 2-ounce size although I had plenty of keepers on the smaller version. For the albies, a fairly quick, straight retrieve with an occasional twitch works great. Keep the lure 4- to 6 inches below the surface. For the bass, add in a little more jigging action and slow the retrieve slightly so it rides a little closer to the bottom. Either way, strike any time you feel a bump.

Fly-rodders should opt for white or silver crease flies, silver, white or olive epoxy minnows, or sparsely tied minnow patterns measuring three to four inches in length and featuring a splash of silver Mylar or flashabou.

When targeting Alberts, choose a smooth working spinning reel filled with 15-to 17-pound test monofilament line or 30- to 50-pound class braid and match it to a rod with plenty of flex but enough power in the butt to turn a 20-pound fish. Surfcasters may want to opt for braided lines as opposed to mono because their thin diameter allows for longer casts. If tossing flies at these gamesters, an eight- to 10-weight rod and intermediate or sinking line makes a good combination.

Whether you fish from shore for boat, with spinning gear or fly tackle, keep in mind that false albacore blast off with amazing acceleration and can get into your fly-line backing or half-way way through a spool of spinning line in a hurry. They’ll make two or three scorching runs every time, and might add in a couple of shorter, bulldog efforts toward the end. It’s a fight that might leave you as spent as the fish at battle’s end, but most false albacore fans I know wouldn’t have it any other way.