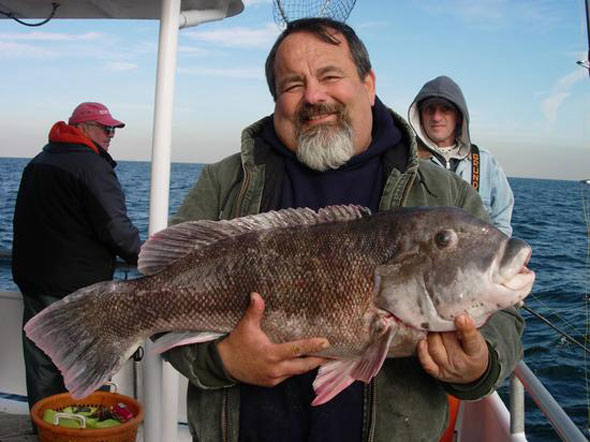 While blackfish may have vacated most near shore hot-spots by now, some of the biggest white-chinned bulldogs of the year are still holding over deep-water offshore wrecks and scratchy bottom. You can reach these fish if your vessel is seaworthy and comfortable enough to plow though winter waters, or you can hop aboard a charter or open boat out of City Island, Sheepshead Bay, Freeport, Oceanside or Point Lookout to get in on the fun. Either way, your bow should be pointed toward the blackfish Mecca known as 17-Fathoms. It’s a Long Island West End blackfish hot spot that offers the opportunity to tangle with the ‘tog of your life every time your bait hits the bottom.

“We really do see some incredible bulldogs here,” says Mike Barnett, long-time skipper of the Freeport charter vessel, Codfather. “A ‘big’ fish for this area is 10 to 13 pounds. Some are even larger.” 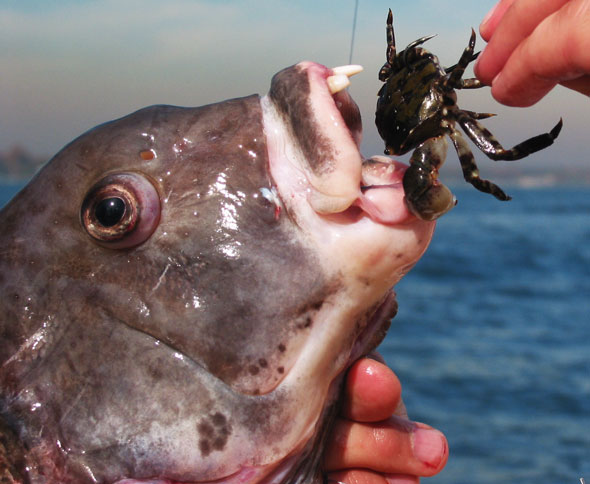 Green crabs are a great bait for deep feeding blackfish. Note the canine teeth and tough lips on this bruiser bulldog.

The More You Move, The Less You Catch

Located about 16 miles southwest of Jones Inlet, the 17-Fathom area is a natural formation of underwater rock-strewn bottom featuring plenty of submerged hills, crevices, ridges, humps and ledges. It is a loosely defined territory that can be put at about a square-mile in size, give or take a little. Water depths here begin at 80 feet in the northwest corner and drop off to over 140 feet toward the southeast at what was once known as the “Tournament Grounds,” a place where bluefin tuna are sometimes the target.

“In addition to all the natural formations on the bottom here,” explains Barnett, “17 Fathoms might have been a dumping ground for rubble at some point because I’ve pulled up rebar on my anchor. The structure is spread out a bit across the sea floor with soft bottom between each hump. To score well, you need to anchor carefully so that you are over the hard structure, which is often covered with giant mussels.”

It’s also important to wait out the ‘tog here once you’ve set anchor as the fish in this area don’t seem to be as concentrated as they are on more high-profile, inshore wrecks. Rather than expect a bail job, anticipate a steady pick that will eventually fill your limit with quality fish. Use your electronics to set up on a hard spot, get your baits to the bottom and then wait for the fish to steadily slide over to your piece of real estate.

Barnett sums it up simply: “The more you move, the less you catch.”

Due to the depth and heavy currents at this location, it helps to envision the blackfishing as more a codfish-style trip than an inshore blackfish venture (indeed, codfish and ling may be part of the day’s by-catch). To handle the conditions you’ll need a stiff conventional outfit with 40- to 50-pound braided line. Since the beginning of time, it seems, a single-hook bottom rig featuring a size 4 Virginia style blackfish hook has been the go-to rig. Over the past few years, however, size 4/0 Gamakatsu super-sharp octopus style hooks have replaced the Virginias for many sharpies.

In terms of baiting up, green crabs and Jonah crabs, known locally as “whites” due to their white underside, tempt the most trophies. If taking an open boat, call ahead to make your reservation and check that at least one of these crabs are supplied. On some vessels, they will cost extra. The greenies seem to work best with big ‘tog during December. Once the water gets real cold, below 40 degrees, white crabs tempt more trophies.

No matter where you probe, the key to hooking big blackfish is patience. Wait out the rapid pecks of cunners or runts until you feel a substantial tug – or a fish actually dragging the sinker – before setting the hook. Be aware, too, that strikes from large blackfish are often proceeded by a minute or two of relative calm as smaller fish get out of the way. If the fast raps suddenly stop, be ready for a bigger bite. Strike hard, raise your rod high overhead to lift a surprised bulldog several feet out of the trouble zone before it has a chance to dive for the nearest snag. 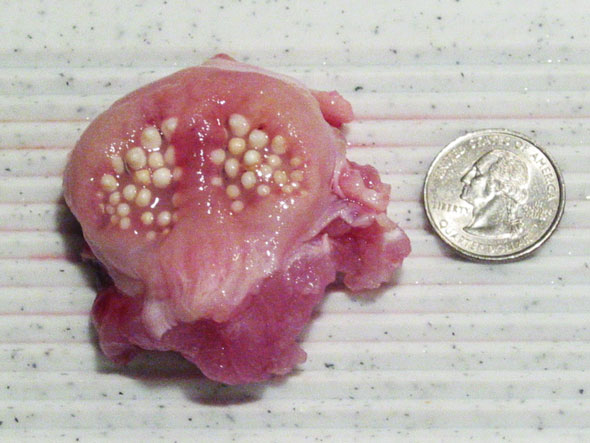 Many anglers know that blackfish have a second set of molars deep within their throat for pulverizing shellfish and crabs but few have actually seen these teeth. The author extracted this set from a six-pound blackfish.

New York’s blackfish season runs through December 14 during 2013, with 16-inch minimum size limit and four fish creel. For this late fall fishing, it is vital to dress warm. Wear insulated underwear, dress in layers, bring along neoprene gloves and a knit hat, and pull on a pair of boots and skins before heading out. If you really want to go in style, check out Frabill’s FXE SnoSuit. It’s designed for serious ice anglers and has no problem standing up to the elements on our offshore grounds. I started using one last winter and I’m hooked on the serious protection and comfort it provides.

It will be interesting to see how the blackfishing evolves at this famous hot spot as this year’s blackish season comes to an end. While many anglers prefer early December to get in on the fun some hardcore veterans, Barnett included, actually favor late January and early February – time slots that are now out of season.

“A decade ago, we used to catch a lot of big fish around Thanksgiving,” reveals Barnett. “These days, however, the weather seems to be a little warmer in the fall, so the action here doesn’t quite hit full stride until the very end of the season. It’s a short window with just the first half of December available so be sure to make the most of your chances and get out there when the weather allows.”

NOTE: In addition to the West End fleet fishing at 17 Fathoms, some open and charter boats may target bulldog blackfish out of Captree, Moriches, Shinnecock and Montauk right through season’s end.