BACK TO THE DRAWING BOARD FOR SEA BASS 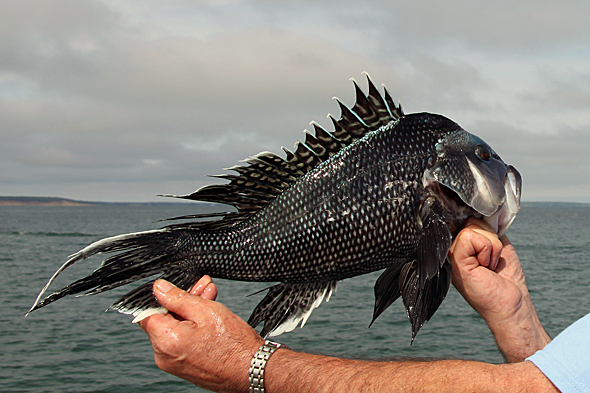 Black sea bass are a favorite target of Long Island anglers. Tasty and amazingly plentiful, fishermen are demanding that their strict regulation be relaxed. Photo by Tom Schlichter.

There’s nothing like controversy to kick off a new fishing season, and when it comes to fisheries management there’s generally plenty to go around. Black sea bass regulations are the sticking point of the moment, and they have nearly everyone shaking their head.

At a meeting in Stony Brook, NY on Tuesday, March 27, the NYS DEC and the recreational/for-hire fishing communities got to hash things out. In short, the DEC presented several sets of sea bass regulations designed to fit within the current federally mandated guidelines. The angling community made it clear that none of the options being considered were acceptable.

Currently, black sea bass stocks are 240% above the species biomass target set by NOAA Fisheries, yet New York anglers have seen decreases in their allotted take for six of the past seven years. At what point, fishermen ask, will we finally be allowed to harvest more fish and enjoy the benefits of such a robust stock?

To be sure, the DEC’s Division of Marine Resources Director, Jim Gilmore tried to assure anglers, for-hire captains and other industry stakeholders the he has heard their message and agrees something must be done. He announced that NY has joined the other states in the black sea bass northern regulatory zone – CT, RI and MA – in appealing a decision by the Atlantic States Marine Fisheries Commission (ASMFC). That decision allowed the five states in the southern sector, plus New Jersey, to liberalize their sea bass regulations while the northern states have to suffer reductions.

While calls for lawsuits against the federal government and non-compliance with the federal guidelines ruled the evening, there was an exchange of ideas that left some a little more hopeful change would come quickly, some convinced it might not come at all, and many unconvinced that we would see any significant resolution in 2018. The DEC believes it has a good chance of reducing what is currently a 12% decrease for New York anglers to a 6% decrease – but nobody, fisheries managers included, believes a reduction of any type is an acceptable outcome.

In the days since the meeting, I’ve had chance to interview quite a few of those who attended, plus NYS DEC Commissioner Basil Seggos. Following are some highlights from those conversations that didn’t make it into my Newsday Outdoors column on Friday, 3/30/18 due to deadline and space limitations. 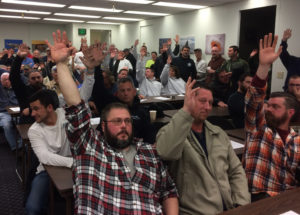 A show of hands was nearly unanimous when Capt. Jamie Quaresimo asked to see who supported going out of compliance. Photo by Tom Schlichter. 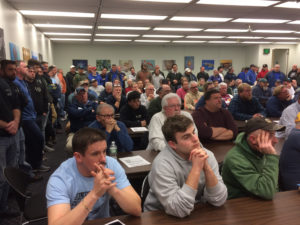 Fisherman at the Black Sea Bass meeting in Stony Brook listen intently as the DEC presents its management options. Photo by Tom Schlichter.

On The Possible Negative Effects Of Having Too Large A Sea Bass Biomass: 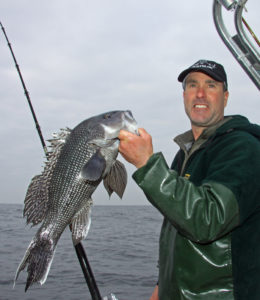 The massive 2011 year class of black sea bass is approaching the end of its life expectancy, which equates to some massive sea biscuits caught in recent years. Photo by Tom Schlichter.

QUOTES FROM OTHER STAKEHOLDERS