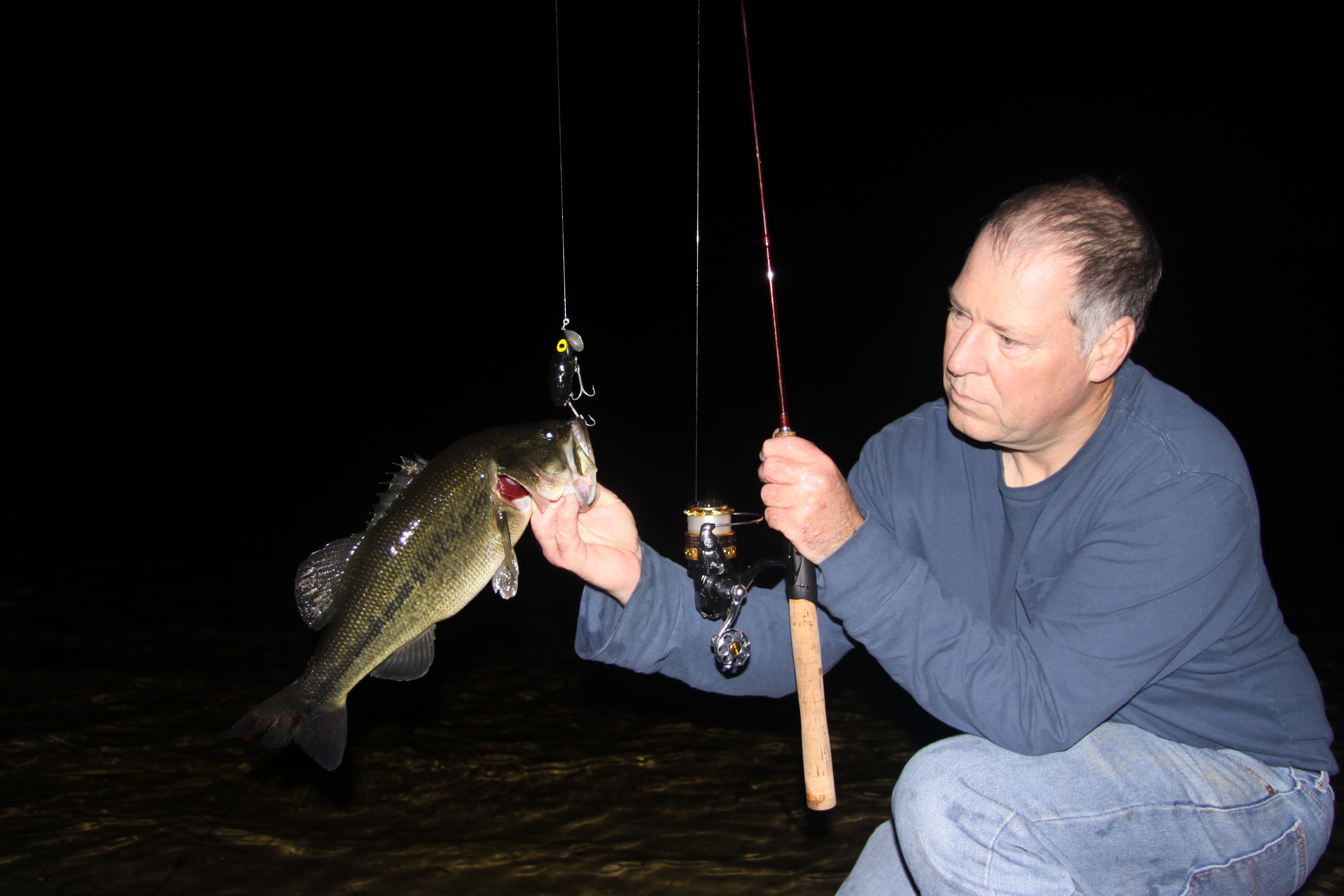 In the distance you hear the pitch-black surface plug splash down tight to shore. You wait a few seconds, wave at the mosquitoes, and then begin a slow and steady retrieve. As you spot the dark silhouette trailed by the expected v-shaped wake you realize a second wake is closing in for a broadside kill. Suddenly the songs of bullfrogs, cicadas and other creatures of the dark are overwhelmed by the Wumph! of a six pound bass as the lure vanishes in a monstrous swirl. The biggest black bass of your life is now on the line and catapulting across the surface. It’s time to pray the small treble hooks with crushed barbs somehow manage to stay stuck. 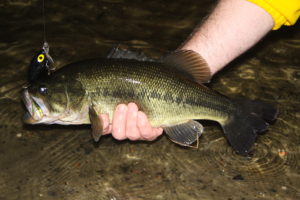 It amazes me how nearly every moon-lit surface strike sounds like a record-setter, but there is a subtle difference you can sense between a true trophy largemouth bass weighing six pounds or more and smaller, although certainly worthy, adversaries in the two- through four-pound class. The former have richness and veracity in the volume of their strikes unchallenged by lesser fish. It’s a heavy base sound with no hesitation on the pounce; a smashing take that sucks your lure under leaving small whirlpools and no doubt the target has been consumed. I live for that sound every summer – and I hear it most often during the dog days of July and August.

It is little secret that bragging-sized bucketmouths tend to sulk during the hottest months of the year, but they still have to eat sometime and that means you’ve got a shot at catching them if you are willing to go the extra mile. Many anglers make the adjustment by fishing shade lines at dawn and dusk, moving out to deeper water once the sun is high in the sky, or slop fishing with weedless frogs, soft plastics and punch jigs in the heaviest weed cover imaginable.

All these techniques have followings, and each works well. Still, I find fishing at night to be something special. True, it is just another way to approach the problem of rousing big fish that have made themselves scarce, but the need to further fine-tune your senses of hearing, touch and vision just to stay in the game appeal to me.  So, too, does fishing out of reach of the sun’s burning ultraviolet rays, searing heat and unrelenting brilliance.

Of course, I also find late night bassin’ a wonderful change from beating the same shoreline brush, stick-ups and weed beds that other anglers pound again and again during the week and twice on Sundays. Cooler late night temperatures and fewer anglers on the water definitely prompt the biggest of bass to chow down with greater urgency, and knowing that a potential record breaker is out there on the prowl can keep me sharp right through daybreak. 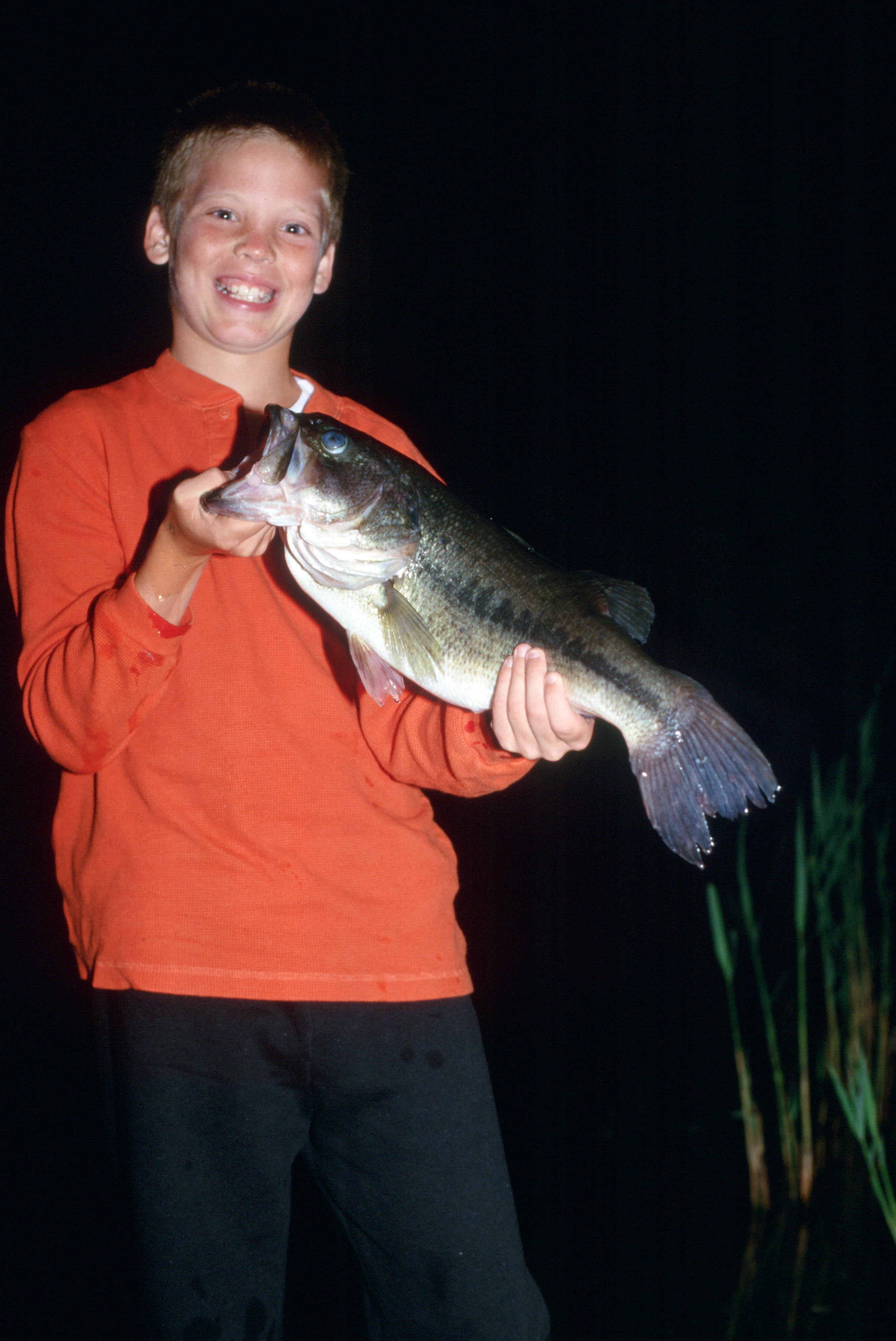 Whether you fish from boat or shore, be certain to check out all new spots before prospecting after dark. Photo by Tom Schlichter.

FISH IN THE OPEN

One really neat aspect of targeting largemouths after dark is that you can intercept them in the clear. With fewer anglers working the water, bass tend to ease out of the heaviest cover to enjoy a little open water swimming. I often find great fishing just a short cast from daytime hot spots with the bass patrolling channels and weed edges instead of being buried further back in the grassy mats. Often this takes place on large flats that are barren once the fish begin to move out at sunrise. At other times, I’ll find fast action in obvious channels that split fields of lily pads or allow boat passage between open water and weedy coves.

If you love casting toward stick-ups on the bank, you’ll also find night fishing a treat. That’s because rather than rig up with a weedless plastic that needs to be skipped way back under living canopies, you can quietly slip into position in a way that allows paralleling a brush-, phragmite- or tree-lined shore with long casts to cover an endless strike zone.

There are also places that produce almost exclusively after dark you’ll want to sample on these late night forays. Launch ramps are a classic example. With boats going in and out all day long, the odds of tempting big fish here are slim and none. After dark, however, when all is quiet, trophy class fish have a knack for sliding quietly right up the edge. Sandy swimming beaches are another option, as are shadow lines caused by streetlights, marinas, restaurants and waterfront homes.

BEEF UP YOU GEAR

Of course, night bass fishing does have pitfalls. Your sight is compromised and it can take a few trips to develop a nighttime touch for casting. Bugs can be brutal so you’ll need appropriate clothing and, I hate to say it, real bug spray. Navigation can also be a little bit unsettling, especially the first few times you fish a new location after dark. A word to the wise should suffice on these points, but keep in mind always that safety is job one. Always scout any place you plan to fish in the daylight whether casting from a boat, wading or fishing from shore.

As for gear, I think it best to lean a little toward the beefy side to more easily control big fish in the dark. With your vision limited, it is hard to tell exactly where a lunker is headed, and a heavier stick with 12-pound or 14-pound test mono line will help you guide big ones within reach. I favor mono lines at night since I throw top-water lures almost exclusively. While braid gets the job done in the daylight slop, I prefer the more buoyant tendencies of the mono after dark, especially when working surface lures at a crawl.  Most largemouth bass fans recognize the time-tested Jitterbug as king of midnight bass fishing and it’s hard to dispute the catching power of this perennial favorite lure. Still, just about any dark colored surface popper will do in a pinch provided it is worked with a constant popping or slow and steady wake-producing retrieve.

Although mid-summer is prime time for connecting with the hawgs of darkness, this fishing can be productive well into the fall for those willing to give it a try. But there’s no reason to wait for cooler weather to get in on the fun because the bite is already well underway. Remember as you head out that lunkers do indeed prowl with evil intent after dark but other surprises lurk just beyond your view. I once snagged a popper in an overhanging willow. As I drew within a few feet to shake it free, dozens of bats exploded from the branches. Luckily I was seated or I surely would have ended up in the drink.